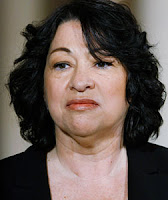 By Larisa Alexandrovna and Muriel Kane Published: June 5, 2009
From the Rawstory.com
How corporations are buying the judiciary: Part I
Corporate interests posing as a grassroots conservative group are behind attacks on President Obama’s Supreme Court nominee, a RAW STORY investigation has found.
The Committee for Justice (CFJ), an astroturf group established by big business in July 2002 to create an appearance of popular support for President Bush’s judicial nominees, is now leading the effort to oppose the nomination of Judge Sonia Sotomayor to the US Supreme Court.
See More
Posted by Tom Sebourn at 11:31 PM