Cynthia McKinney Free and Talking To The Press 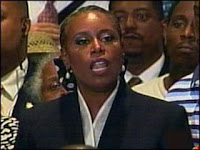 WASHINGTON -- 11Alive's Brenda Wood sat down Friday afternoon with former Congresswoman Cynthia McKinney, who recently returned to the United States after being detained by the Israeli military. McKinney was on a boat that attempted to breach an Israeli blockade on what the former DeKalb County Congresswoman said was a humanitarian mission. Israeli officials said McKinney's actions were both irresponsible and a publicity stunt. McKinney says her actions were "pure" and to advance the cause of human rights by delivering aid to Gaza, particularly in the form of art supplies for children in the embattled region. "They've dismissed it as a publicity stunt," said Wood. "How do you respond?" "I wouldn't spend anytime responding to that. The subject ought to be that Israel's actions violate international law," McKinney replied. "And the subject ought to be, how can US policy change that particular fact. One thing that Congress and the president can do, is to not give -- not one dollar, not one more weapon to the Israeli military machine."
MORE
Posted by Tom Sebourn at 10:26 PM