Feinstein: CIA program was ‘outside the law’ 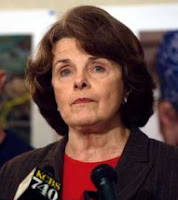 By David Edwards Published: July 12, 2009 Updated 6 hours ago
U.S. Senator Diane Feinstein (D-CA), during an interview with Fox News host Chris Wallace, expressed her displeasure with the prior administration for reportedly hiding one of its counter-terror programs “outside the law” and away from congressional oversight.
“I think you weaken your case when you go outside the law,” she said on Sunday morning, speaking opposite of Sen. John Cornyn (R-TX).
Read More at RawStory.com
Posted by Tom Sebourn at 3:11 PM