No Healthcare! Tea Party Patriots at it again! 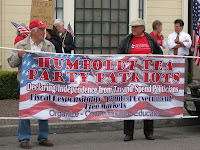 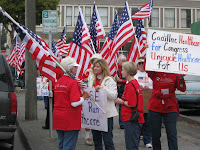 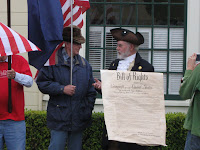 A very colorful crowd was protesting against government run health care and spending. Dozens of patriotic looking people gathered outside Congressman Mike Thompson's office in Old Town Eureka.
For some reason, many of these people believe that a public option or single payer system will mean that doctors and hospitals will be owned by the taxpayers. They don't know the difference between socialized medicine like the V.A. and a system like Medicare that would be an alternative to other insurance companies. They seem to think option means required.
In all fairness, few people including the politicians have read the latest 11-hundred page proposal for health care. One thing to note, the the CBA estimates that the country spends about 100-billion dollars a year to pay for the uninsured. Obama says the plan he envisions would spend 1 trillion dollars over 10 years. That is exactly what we are spending now. The difference is that 37 million more people would have some sort of coverage and be able to go to preventive care instead of showing up at the hospital emergency room.
If everyone were covered by a single payer system, there would no need for workers comp. insurance unless the job by definition is hazardous or extremely dangerous.
This would take a lot off of the backs of small and medium size businesses.
Single Payer is unlikely to pass based on what Senator Bernie Sanders said today on the Thom Hartmann Program. He said a bill he sponsored for single payer had only 4 other signatures and not much response from most of those on Capital Hill that are finding it hard to fend off the powerful health care lobbyists.
I wish these people would have turned out when many of us were trying to stop the Iraq war and were protesting the Patriot Act that gave our president almost dictitorial powers. They are now against that power but were for it when congress handed it to George W. Bush.
It seems that they were just sure they would be able to steal another election.
On the bright side, at least the Tea Baggers are upset. That means they are starting to pay attention. Problem is, they get most of their news from organizations that lie to them.
I hope they keep protesting and asking questions. I just wish they would turn off Fox News and KINS. The local news on KINS is not bad, the talk shows however, are mostly bitter neocons with misleading information.