Spitzer: Federal Reserve is ‘a Ponzi scheme, an inside job’

By Daniel Tencer Published: July 25, 2009
From the RawStory.com 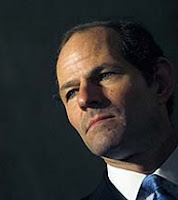 The Federal Reserve — the quasi-autonomous body that controls the US’s money supply — is a “Ponzi scheme” that created “bubble after bubble” in the US economy and needs to be held accountable for its actions, says Eliot Spitzer, the former governor and attorney-general of New York.
In a wide-ranging discussion of the bank bailouts on MSNBC’s Morning Meeting, host Dylan Ratigan described the process by which the Federal Reserve exchanged $13.9 trillion of bad bank debt for cash that it gave to the struggling banks.
Spitzer — who built a reputation as “the Sheriff of Wall Street” for his zealous prosecutions of corporate crime as New York’s attorney-general and then resigned as the state’s governor over revelations he had paid for prostitutes — seemed to agree with Ratigan that the bank bailout amounts to “America’s greatest theft and cover-up ever.”
Read More
I have said and made the point in my former blog that Eliot Spitzer knew what Wall St. was doing and that is why they made such a big deal out of him paying for a high priced, good looking, female prostitute.
The Bush Justice Department... it's all in the story, click the link.
Posted by Tom Sebourn at 8:26 PM