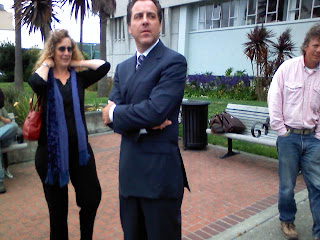 Civil Rights Attorney Brian Claypool announced today that 3 lawsuits have been filed against the Humboldt County Sheriff's Department and the Eureka Police Department.

The lawsuits, filed in Federal Court in San Francisco and Oakland stem from the deaths of Martin Cotton Jr. , Chris Burgess and Peter Stewart. All three died while in the custody of local law enforcement in the last 2 and a half years.

A fourth lawsuit is pending in the case of James Hans Peters, whom police say committed suicide. Claypool said he didn't think that Peters committed suicide and sited a couple of factors. 1. The injuries were not consistent with suicide. 2. Peters was happy and excited about getting out of jail and was making plans for his future

Brian Claypool is asking the public to get involved. He said that there were witnesses in these cases that won't come forward because they fear police retaliation. He urged those that know anything about these cases to come forward and contact him.
I have his number if anyone wants to help out in any of these cases.
Send me an email with your info and I will have him get in touch with you.
thomassebourn@gmail.com
Or you can contact redwood curtain copwatch at the link below.

For more background on these cases see links below.