UN investigator accuses US of shameful neglect of homeless 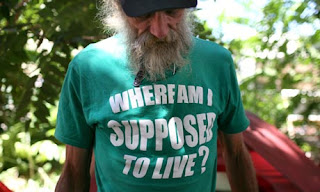 This from the Guardian UK

A United Nations special investigator who was blocked from visiting the US by the Bush administration has accused the American government of pouring billions of dollars into rescuing banks and big business while treating as "invisible" a deepening homeless crisis.

Raquel Rolnik, the UN special rapporteur for the right to adequate housing, who has just completed a seven-city tour of America, said it was shameful that a country as wealthy as the US was not spending more money on lifting its citizens out of homelessness and substandard, overcrowded housing.

"The housing crisis is invisible for many in the US," she said. "I learned through this visit that real affordable housing and poverty is something that hasn't been dealt with as an issue. Even if we talk about the financial crisis and government stepping in in order to promote economic recovery, there is no such help for the homeless."

She added: "I think those who are suffering the most in this whole situation are the very poor, the low-income population. The burden is disproportionately on them and it's of course disproportionately on African-Americans, on Latinos and immigrant communities, and on Native Americans."
See the rest of the story.

There are many in this county that think we do too much for those without homes.  I think the country as a whole, has done little to address this issue.  Since Ronald Regan closed all the mental hospitals and kicked the people there to the streets, it seems we just accept the situation as normal.  Our country can do better, our county can do better and yes, even Arcata can do better.
Arcata is home to a blogger that just takes pictures of homeless people and people living in the cars and vehicles.  He mocks them and offers no real solutions to the problem.  There are many that believe that if we don't feed them and allow them to sleep that the problem will just go away.
Contrast that with the work being done in this county by John Shelter, Paul and Betty Chinn, St Vincent De Paul, the City of Eureka considering parking lots for people to be allowed to sleep in their cars, and other positive steps to improve peoples lives and I think that Humboldt County is in the lead when it comes to real solutions to the problem.
Posted by Tom Sebourn at 1:31 PM