In 1930 water was diverted from the Klamath River and sent south to irrigate desert land. Homesteaders were given a chance to make a go of it at Tulelake north east of Bakersfield. At one time the lake was so vast, there was a paddle wheel boat that ferried people across the shallow but large lake. The homesteaders experimented with many different crops, this link to the Tulelake Homesteaders
(Based on the book The Years of Harvest - A History of the Tule Lake Basin, by Stan Turner (with contributions from the 1981 historical research project of South Eugene High School); the Ave. Press, Eugene, Ore.; c1988) tells of one farmer that was able to use some of the poor high alkaline soil to grow horseradish.
"Otto Schaffner had been one of the last Tule Lake Basin homesteaders, in 1948-49, taking a northeastern plot of the basin that was high in alkali. After working gypsum into the ground for several years, he began to grow horseradish in 1954. In the late 1950's, Schaffner went into the horseradish processing business with the help of a University of California food technologist who developed a formula for a marketable sauce. The Tulelake Horseradish Co. was founded. Tulelake remains the major horseradish producing area in the United States".

There are areas north east of Bakersfield that today appear to have snow on the ground during 100 degree temperatures. It is actually salt that has built up in the soil. This is a perfect place for solar farms, but I digress.

There is another interesting article from AlterNet published earlier this year. It is about the water that is diverted to the west side of the San Joaquin Valley for crops and the harm done to the countries largest commercial fishing industry. That's right, California, according to the latest numbers available is by far the number one commercial fishing state in the union.

I bring all of this up because on Christmas, there was a shortage of horseradish available at stores in So Cal where I spent Christmas. We eventually found some for the prime rib so all was well. But on my way home I saw these signs posted along Interstate 5 north of the Grapevine. Mostly they were in dead fields across the freeway from healthy green ones. Sometimes they were next to hundreds of bee hives.

This one in particular stood out. With the bright green crop directly behind it. Just a few feet behind the sign were dark green fields with water down the rows. It didn't look like a congress created dust bowl to me. 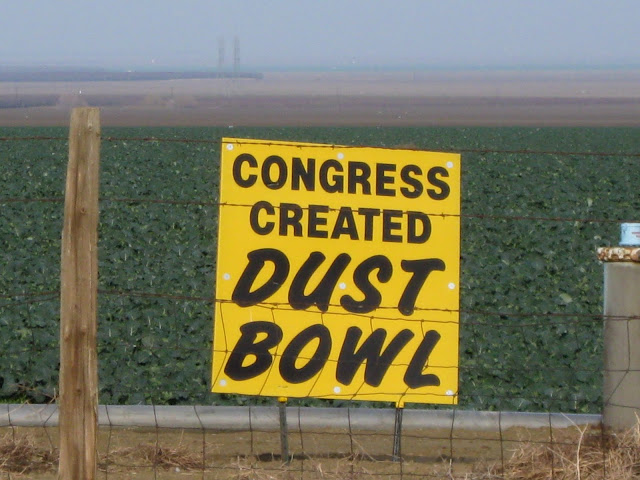