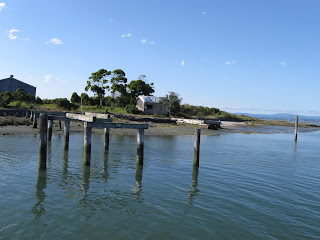 Bill at Highboltage gets credit for bringing this up a few days ago.  It is a reminder of our past.  Forget the past and we are bound to repeat it.

On February 25, 1860, the Wiyot experienced a tragic massacre which devastated their numbers and has remained a pervasive part of their cultural heritage and identity. World Renewal ceremonies were being held at the village of Tutulwat, on “Indian Island” (also known as Gunther Island[3])about a mile and a half offshore from Eureka in Humboldt Bay. The leader of the Humboldt Bay Wiyots was Captain Jim. He organized and led the ceremony to start a new year.

A group of Eureka men came to the island in the early morning after the last ceremony was completed. They were armed with hatchets, clubs and knives.[4] They left their guns behind so the noise of the slaughter would be only screams rather than gunshots. This was not the only massacre that took place that night. Two other village sites were raided, on the Eel River and on the South Spit. Reports of the number of Wiyots killed that night vary from 80 to 200.

The 1860 massacre was well documented historically and was reported in San Francisco and New York by a young American writer who would later use the pen name Bret Harte. Harte was working as a printer’s helper and assistant editor at a local newspaper at the time, and his boss was temporarily absent, leaving Harte in charge of the paper. Harte published a detailed account condemning the event, writing, “a more shocking and revolting spectacle never was exhibited to the eyes of a Christian and civilized people. Old women wrinkled and decrepit lay weltering in blood, their brains dashed out and dabbled with their long grey hair. Infants scarcely a span along, with their faces cloven with hatchets and their bodies ghastly with wounds.”

On the contrary, the Humboldt Times newspaper editorialized, “For the past four years we have advocated two—and only two—alternatives for ridding our country of Indians: either remove them to some reservation or kill them. The loss of life and destruction of property by the Indians for ten years past has not failed to convince every sensitive man that the two races cannot live together, and the recent desperate and bloody demonstrations on Indian Island and elsewhere is proof that the time has arrived that either the pale face or the savage must yield the ground.”

The Times apparently represented the mainstream opinion in the area at the time. An investigation failed to identify a single perpetrator, although those who did the killing were rumored to be well known. Harte quit his job one month later and moved to San Francisco, where an anonymous letter published in a city paper is attributed to him, describing widespread community approval of the massacre.

The Wiyot people were decimated. They were corralled at Fort Humboldt for protection. Survivors were herded mostly to Round Valley, established as an Indian reservation within California. They kept escaping and returning to their homeland.