E-Cigarettes, Watch Where You Buy Them.

On Saturday, I placed my first order for an e-cigarette starter kit. It came Wednesday morning. I still had a half a pack of real cigs but was eager to try out the smokeless cigarette. The were simple to use and I was amazed how much like a real cigarette they were. They contain nicotine so they are satisfying, but the lack of burning leaves and paper leaves the lungs in a much happier state. 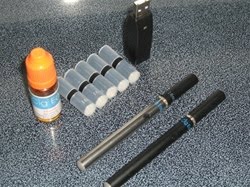 There are several companies out there that sell these and some even give one away to get you to try the product. Many of these companies are rip-offs. Some of the free offers are followed by continued slams against the credit card used for shipping, up to 70-dollars a month. Other TV offers have starter kits for about 300-dollars, also a rip-off.

I found the company I bought from through a radio show called Mike Malloy. He had a friend that sells coffee beans that wrote a testimonial of his experience with e-cigarettes. He researched several companies and came up with two that were worth doing business with. Through one of these web sites I obtained my starter kit for under 50 dollars. Of the two companies, one has the best deal on the e-cigarettes and the other has the best selection and price for refills.

The batteries and refills last longer than I thought. I went almost two days on one cartridge. That would be equal to almost two packs of full strength cigarettes. 5 packs are about 9 dollars plus shipping. Order more and they still fit into the same size shipping box and you can save a little. My kit came with Marlboro flavored cartridges and they are o.k. but I don't like Marlboro's as I used to smoke American Spirits. When the first cartridge was getting low, I refilled it with a bottle of 555 flavored liquid that came with the kit and I found the flavor to be much better. There are dozens of flavors from mint, clove, hot chocolate, several tobacco flavors and even Dr.Pepper.

I bought a starter kit for my mom tonight after only trying them for two days. She needs to quit but can't seem to kick the habit. This seems to be the next best thing. No burning leaves or paper, just nicotine. After all, that's what smokers are addicted to, that and the oral fixation and the e-cigarette delivers both.

I am not condoning these for anyone except smokers that have tried to quit and failed. It is worth a try.

The starter kit at about 50-dollars equals about 10 days of buying cigarettes if one smokes about a pack a day.

The refills seem to work out to about 30 to 40 dollars a month after that. You would be saving money and your lungs at the same time. Probably have a lower rate of lung cancer, emphysema, blood clots, heart problems, burn holes in your furniture and clothes and that smell that sticks to everything.

Here's the site that got me started. I should note that the Mike Malloy show and the coffee guy have no connection to and are not making a cent off of e-cigarettes.

It's not perfect but it is better than smoking.
Posted by Tom Sebourn at 11:02 PM