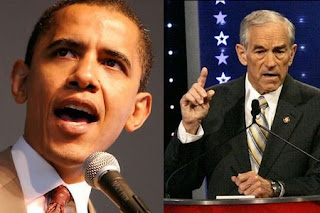 From Rawstory.com
Ron Paul is a long-shot for the Republican nomination for president by any standard, but a Rasmussen poll finds him in a statistical tie with President Barack Obama.


The survey, released Wednesday by the conservative-leaning organization, finds Obama edging out Paul by 42 points to 41 in a hypothetical 2012 matchup. Eleven percent said they would prefer a different candidate, while 6 percent were undecided.

Rep. Paul (R-TX) has rankled the GOP and conservative establishment with his opposition to its big-spending ways and penchant for war, but has garnered an ardent following of small-government libertarians from across the nation.
(photo from rawstory.com)
More at Rawstory.
Posted by Tom Sebourn at 9:38 PM