As British Petroleum scrambles to affix a four-story, 70-ton dome over the massive oil geyser venting toxic sludge into the Gulf of Mexico, people everywhere are wondering what else can be done to stem the deadly tide. 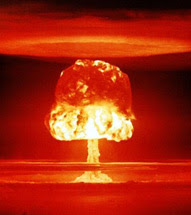 Komsomoloskaya Pravda, Russia's best-selling daily publication, has an idea: Why not just nuke it?

During the Soviet years, Russia's communists had to deal with numerous oil disasters and on five different occasions they employed controlled, underground nuclear blasts to quickly solve the problem.
[The] underground explosion moves the rock, presses on it, and, in essence, squeezes the well’s channel," Pracda reported.