The Bradblog has once again discovered that electronic voting machines cannot be trusted. 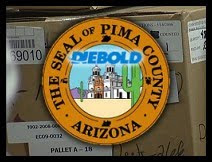 Excerpt from story:
"After many years of litigation, Election Integrity advocates have now finally been allowed to review the long sought-after poll tapes in question. What they've discovered is disturbing and, so far, without legitimate explanation.


Out of 368 precincts, 112 poll tapes are completely missing. Moreover, 102 of the "yellow sheets" --- certified precinct reports, signed by poll workers, detailing corresponding summary information, such as numbers of ballots received, cast and spoiled, as helpful for important auditing functions at the precinct level --- are missing as well.

Furthermore, of the poll tape records that are not missing, 50 of them do not match the results as recorded in the final canvas of the election, according to the Election Integrity advocates who have compared them to the original electronic database numbers."

Arizona is making things up as they go along.  Please read the entire story at bradblog
Posted by Tom Sebourn at 5:04 PM