Mainstream science accepts that trails from jet aircraft are lingering for hours, but claims it is a natural phenomenon. 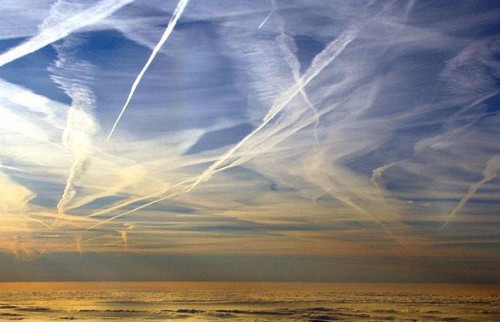 Scientists now admit that emissions from aircraft are forming artificial clouds that block out the sun, precisely what geoengineering advocates like top eugenicist and White House science advisor John P. Holdren have called for, but the article tries to insinuate that the effect is caused by natural “vapours,” when in reality it can be attributed to chemtrails that contain substances harmful to humans.

“The phenomenon occurs when aircraft fly above 25,000ft, where the air temperature is around minus 30C. This causes water vapour emitted by the engines to crystallise and form the familiar white streaks across the sky, known as contrails,” writes Oliver Tree for the Daily Mail.

“Reading University’s Professor Keith Shine, an expert in clouds, said that those formed by aircraft fumes could linger ‘for hours’, depriving those areas under busy flight paths, such as London and the Home Counties, of summer sunshine.”

“Experts have warned that, as a result, the amount of sunlight hitting the ground could be reduced by as much as ten per cent. Professor Shine added: “Over the busiest areas in London and the South of England, this high-level cloud could cover the sky, turning bright sunshine into hazy conditions for the entire area. I expect the effects will get worse as the volume of air traffic increases.”

The report also makes reference to a 2009 Met Office study which found that high-level winds did not disperse contrails that later formed into clouds which covered an astonishing 20,000 miles.

Of course, this is no natural phenomenon as the article claims. Ten years ago, contrails from jet aircraft disappeared within minutes, yet apparently we are led to believe that the same substance is now causing the trails to linger for hours and form into clouds. This is impossible without something within the substance having been changed.
Read More

For those of you that think all of this is tin foil hat stuff, think again. I have had discussions with meteorologists and even someone from the National Weather Service that confirm some of these they see are impossible.

I referred to the contrails while talking to someone at the National Weather Service one day and they told me they call them chemtrails.


They admit that it is unlikely that a contrail would start an stop the way we often see them do. It is rare one guy told me for pockets of warm dry air to be surrounded by cold moist condensed air and then more warm dry air as some of these trails would suggest. Contrails are usually caused by disturbance of cold moist condensed air at high altitudes.
Posted by Tom Sebourn at 4:53 PM