Between the Chevron station and Murphy's Market sits The Catch Cafe'.  They feature half pound, Humboldt Grass Fed Beef hamburgers and everything from eggplant parm grinders  and chili fries to local fresh rockfish n' chips ( when available). 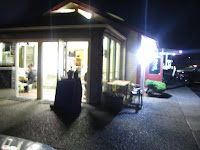 Tonight I stopped there because I had heard they bought a pizza oven and were selling pizza.  Until now, the closest pizza to Trinidad was at Smug's in McKinleyville.  Pizza was something that existed somewhere else unless you did Pappa Murphy's or made it yourself.

I ordered a 10" pepperoni and black olives and it was fantastic!  According to the menue they make their own mozzarella cheese.

They are going to be open 6 nights a week until 10 pm!  Traditionally they have been closed on Monday but are thinking maybe they will close Tuesday since practically everything else is also closed on Monday. 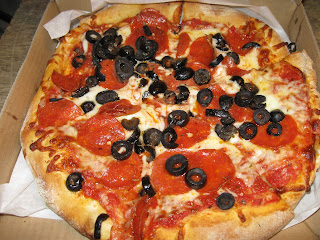 They have really limited inside seating but have a nice patio to enjoy in good weather.

They deliver all the way to McKinleyville for an extra charge or you can eat it there or take out.