I Got An Email From Senator Bernie Sanders 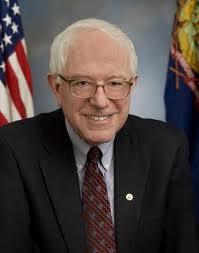 President Obama is right about one thing -- Republicans in Congress are holding the middle class hostage.

We have a $13.8 trillion national debt, a collapsing middle class and the most unequal distribution of wealth of any major country. With all this in mind, Republicans in Congress say they will block tax cuts to the middle class and block unemployment benefits to more than two million families unless the President gives huge tax cuts to millionaires and billionaires.

Their behavior is morally bankrupt. It is reprehensible.

But instead of challenging the Republicans for their absurd demands and their outrageous tactics, the President gave them virtually everything they wanted.

I cannot and will not support this deal. I will do everything I can to uphold the promise made to the American people to end the Bush tax cuts for the rich.

Join me and my friends at Democracy for America today and sign our pledge calling on Congress to reject this deal.

One of the most underreported parts of this deal is a cut to the Social Security payroll tax. In just one year, over $120 billion of revenue will be cut from Social Security under the President's compromise plan, weakening the program and virtually guaranteeing benefit cuts in the future.

Make no mistake about it. Social Security has not added one dime to the national debt and this cut will only embolden Republican attempts to privatize the program and increase the age of retirement. Social Security is a vital safety net for all Americans and a cornerstone of our commitment to protect the middle class.

We are not alone in standing against this compromise. Republicans are holding the middle class hostage and the American people know it. I come from a small state and yesterday my office received more than 1,000 calls on this issue, with over 90% of them in opposition to this deal.

Last night, thousands of DFA members joined me on DFA Live where we had a lively discussion on this issue. One thing was clear to me during that call -- DFA members nationwide want Democrats to stop this deal and fight for the middle class, working people, senior citizens and the unemployed while making sure that millionaires and billionaires are not given massive tax breaks.

Make sure Congress gets the message -- Join the fight now and sign the petition opposing this so-called "compromise."