Kucinich worries his district will be eliminated

(CNN) – The state of Ohio will lose two congressional seats thanks to the latest U.S. Census figures, and liberal stalwart Dennis Kucinich is worried his seat is on the chopping block. 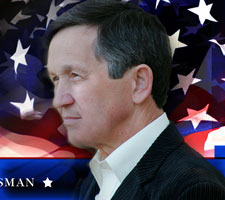 Click for more.
The Los Angeles Times early in the week said that the census under counted California by about 1.5 million less people than are here.  We should be getting another seat in the US House. Don't hold your breath.
I like Kucinich and hope he can win a seat in his new district if this happens.
Posted by Tom Sebourn at 9:02 PM