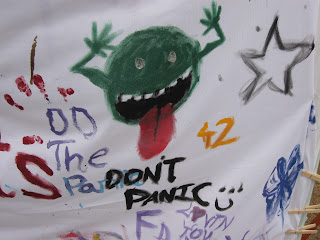 North Coast Journal Time Travelers
Judging from the North Coast Journal Blogwatch time stamp, the members of the NCJ are some how connected with time travel.  They are for some reason, existing in the time zone of Nova Scotia and are 4 hours ahead of us but posting in real time.  We have all known this for some time now. No one wanted to point this out for fear of being lumped into the conspiracy theory camp of questionable people.  We know who we are.
It has been months since the NCJ Blogwatch started listing blogs that posted in the 8 pm hour to the next day.  I posted something about someone selling shrooms on Craigslist tonight.  Tomorrow, people will wake up and see the story as being fresh and the first story of the day that has been caught up into that realm that is the Blogwatch.
It could just be some clock, like the ones that blink at us after a power outage.  Everyone can see it blink but no one knows where the set buttons are.  That is the most likely scenario but a plausible scenario is that the North Coast Journal Blogwatch is living 4 hours ahead of the rest of us.  That puts a lot of pressure on the rest of us bloggers that have to seek out stories in real time.
It makes it hard to get the scoop on the likes or Hank Sims, Heidi Walters, Ryan Burns, Amy Stewart and the rest of those smart journalists at the NCJ.
I've never felt that I was on the same plane as you guys in the journalistic world of media.  For some reason, I have always felt that you guys are a few hours ahead of me.
I think that I have found the answer.  You guys have a time machine.
Tom Sebourn
Trinidad Ca.
Posted by Tom Sebourn at 10:13 PM