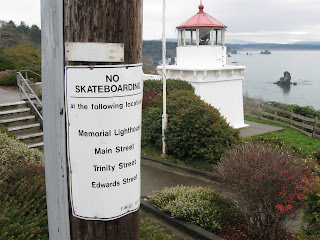 Lisa Espejo is spearheading a movement to build a skate park in Trinidad Ca.  She has put together a blog and email and held 7 meetings to find out what it will take to get a park built for skaters.
The City of forbids skating on its three main streets and there are few places for skaters to go where they aren’t breaking the law.  Fundraising has already begun but there is a long way to go.  According to an article by Elaine Weinreb in the McKinleyville Press, City Councilwoman Kathy Bhardwaj said the City doesn’t own any vacant land and the few parking lots in town are privately owned.  She said all remaining flat areas are owned by the State Park system and the Trinidad Rancheria.
Penny Gunn who runs the Trinidad Artisan Market said she will help organize fundraising for the park and even supply a booth at the Artisan Market.
Read more at the blog.
Posted by Tom Sebourn at 3:11 PM