Dude, You're Using Too Much Electricity 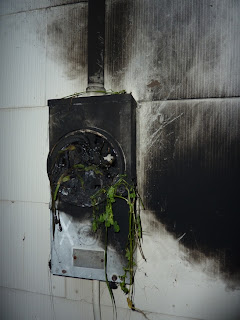 On 4/19/11, at about 9:09 PM, the Eureka Fire Department (EFD) responded to the report of a structure fire at a warehouse on the 1800 block of
,
after a power box on the side of the building caught fire.
Upon arrival, EFD discovered the main power box on the southwest corner of the building had ignited, scorching the side of the building and melting the meter.  Dirt and grass had been thrown on the power box in an apparent attempt by someone to put out the fire.  The warehouse’s front door was ajar and upon the entering the building, EFD personnel discovered a large marijuana growing operation inside.  Additionally, the suspect(s) had left a white Ford F350 Superduty pick-up truck with a dog inside it parked in the warehouse.  It appeared the suspect(s) had fled the building just before EFD’s arrival.
Eureka Police Department officers were dispatched to the scene and the Problem Oriented Policing Unit (POP) was subsequently called out to assist with the marijuana grow.
POP Detectives procured and executed a search warrant for the warehouse.  The building had sustained a loss of power due to the electrical fire, so EFD set up a generator and portable lights to assist EPD with processing the all night scene. 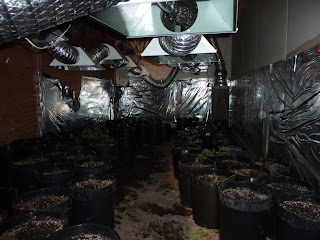 Detectives subsequently located and seized a total of 814 marijuana plants, ranging in size from approximately 6” – 4’ tall (115.5 pounds bulk weight of “wet weed”).  The marijuana crops had been divided into 3 separate rooms serviced by a total of 28 operational 1000 watt (estimated) grow lights. It appeared the power box had likely been overloaded by the excessive, jury-rigged electrical wiring used to power the grows.
The Ford F350 Superduty truck was backed into the warehouse and its bed contained several growing marijuana plants and spilled potting soil.  Detectives seized the truck as evidence and the abandoned dog was transported to EPD for safekeeping.
Based on evidence found at the scene, detectives believe this was an on-going, long-term commercial (for profit) marijuana cultivation operation.  The investigation is continuing and investigators are following up on several leads that may result in one or more arrests.
Posted by Tom Sebourn at 5:18 PM