K9-Angels To Deputy DA, "a little case of mange?"

Dear friends, the following is my reply to Deputy

District Attorney, Ben Mainzer: It is self-explanatory
but is indicative of how low the DA's office sets the
bar for animal cruelty cases: A mockery has been made
of Fortuna Animal Control's investigation and 6 months
of dedication to a grossly neglected dog whose health
has been restored by way of ongoing veterinary care:
(please see attached pics of Mac the day he was seized
by Robin Paul - Fortuna Police Department's office
supervisor and director of animal control: Mac was 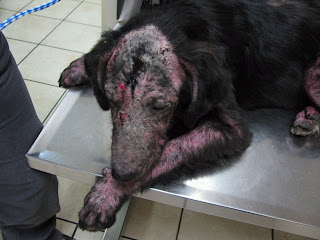 court-ordered to be returned to his abuser yesterday!
Gail Holder/K9-Angels

Mr. Mainzer: I am among the many persons and animal-rescue groups who were denied the right to present evidence against Mark Crummett in the jury trial slated for today, Wednesday, April 20,2011 - but cancelled leaving Mac, Crummett's victimized dog without justice: Pursuant to Fortuna Animal Control's lawful seizure of Mac under PC 597.f and 597.1 last October - two veterinarians were prepared to testify that had Robin Paul not removed the long-suffering animal and transported him to emergency-veterinary care (followed by many months of follow-up treatment) the dog would have died: 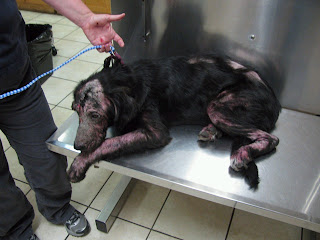 Mr. Crummett's failure to address Mac's severe demodectic-mange is affirmed by veterinary-experts to be the cause of Mac's requirement for costly, lifelong treatment. The unemployed and allegedly alcohol-impaired, Mr. Crummett - lives in squalor in a trailer-park well-known to Fortuna Law Enforcement and citizens alike - as a 'third world country' in miniature, inhabited exclusively by the 'criminal-element' along with the innocent children and animals unfortunately forced to live there:
In a fell-swoop, the DA's cost-effective and clever legal-maneuvers in conjunction with an equally apparently uncaring judge - have, with flagrant disregard for the predictable consequences for the dog - sent poor Mack back to hell:  Elevating the perpetrator of criminal animal neglect to victory - disregarding veterinary recommendations and undermining Robin Paul's praiseworthy professional decisions on behalf of an imperilled animal in
Fortuna's jurisdiction - and in 'sentencing' a dog to further abuse - you have failed us all! I understand that you, Mr. Mainzer, likened the returning of Mac to his owner to "reuniting a child with his parents."  How little you must understand about family law and custody issues; because had you the courage to yourself accompany Robin Paul to the 'dwelling' from which he was
rescued last October - you would have grabbed the child by the hand or the dog by the leash and run!  I doubt the conditions imposed upon Mr. Crummett are going to make much difference to Mac's fate although, respectfully Sir, I'm sure they serve to assuage your conscience: I attach two photos of Mac from the emergency vet's office last October: This horror is what Mr. Crummett characterized as a "little case of mange!" What a shameful representation of Humboldt County justice! Know that the watchful-eyes af the vast network of North Coast animal-advocacy groups ... are watching.
Gail Holder   K9-Angels
Posted by Tom Sebourn at 5:03 PM