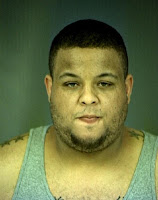 On 4/14/11, at about 7:30 AM, Detectives with the Eureka Police Department’s Problem Oriented Policing Unit (POP) served a search warrant at an apartment on the 2500 block of Albee Street, Eureka.  The warrant was obtained after POP received information the residents were selling cocaine and two small children may be endangered.
Detectives detained one of the suspects, Julianna Terese Jeffers (27 of Eureka), inside the apartment.  The second suspect, Mario Dangelo Alexander (26 of Eureka), had already left for work.  Their two small children, a 2-year-old boy and a 4-year-old girl (4 years), were asleep upstairs.
During a subsequent search of the apartment, detectives located and seized evidence of drug and marijuana sales, including:  approximately 1/4 ounce of cocaine, over 1 pound of processed marijuana, more than 80 Lortab (Hydrocodone-a controlled DEA Schedule III narcotic analgesic) pills packaged for sale, digital scales, numerous (172 +) drug packaging baggies, suspected pay and owe ledgers, a fully loaded semi-automatic .40 caliber Sig Sauer P226 handgun, a loaded 12 –gauge Mossberg pump action shotgun with pistol grip, extra ammunition and magazines for the firearms, and $1,041.00 cash (suspected drug sales proceeds). 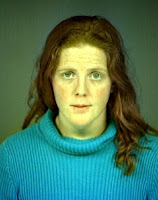 The cocaine and both loaded firearms were found in locations readily accessible to the children.  Child Welfare Services was called to the scene and the children were taken into protective custody.
Jeffers was arrested and transported to the Humboldt County Correctional Facility where she was booked for possession of cocaine for sale, possession of a controlled substance for sale while armed, maintaining a place for drug use/sales, possession of marijuana for sale, and felony child endangerment.
Around 10:00 AM, POP detectives apprehended Alexander on Mitchell Road near his workplace after they found him hiding behind a tree.  Alexander was transported to the Humboldt County Correctional Facility where he was booked for all the same offenses.
Anyone with information concerning suspected drug sales activity occurring in Eureka is encouraged to call the Problem Oriented Policing Unit at (707) 441-4373 or the Humboldt County Drug Task Force at (707) 444-8095.
Posted by Tom Sebourn at 8:47 PM