Black Oak Ranch And Electric On The Eel

Earthdance has moved from Black Oak Ranch near Laytonville Ca. to Vallejo this year.
I was reminiscing  the Hog Farm that used to take place there. I worked many an event just to get in for free.  This year there was no Reggae Rising which is where the concerts at Black Oak Ranch started.  Reggae on the River moved to Benbow a few years ago and seems to be doing well there.  I usually go to Earthdance but this year I will give a pass.  I will instead go to a new festival at Black Oak Ranch, The Gaia Festival, August 5th. through the 7th.

The Festivals of Black Oak Ranch

It all started 24 years ago when Wavy Gravy asked Jerry Garcia if he would do a concert to raise funds to help with the mortgage payments at Black Oak Ranch. Jerry said if you can get Bill Graham to co-produce the show with you I’ll do it. So Wavy asked Bill and “Electric on the Eel” was born. 1987 was the year that Jerry decided to take his acoustic/electric show to Broadway, so Jerry used the Electric on the Eel show as his springboard to the Big Apple. Bringing in David Nelson, Sandy Rothman, & John Kahn for the acoustic set while having his Jerry Garcia Band for the electric set ended up being the same line up that eventually made it’s way to New York in October. Who would have guessed that this groundbreaking show on Broadway would find it’s start at French’s Camp in Southern Humboldt County with Wavy Gravy as MC. Four more years at French’s Camp, with Jerry performing every other year, made up the 5 year run for Electric On The Eel. Hot Tuna, Commander Cody, Ry Cooder & David Lindley rounded out the performances there, bringing an eclectic mix to the home of Reggae on the River. 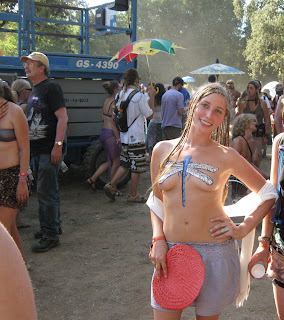 1992 found the Hog Farm going home to Black Oak Ranch for the first festival there, Electric Off The Eel. Country Joe McDonald, Clan Dyken, Zero, Pele Juju, and Rod Deal & the Ideals were some of the performers that weekend. Next up, 1993 saw the beginning of the Hog Farm’s Rock N Roll Pignic. The Pignic was to continue on at Black Oak Ranch throughout the 90’s and into the new millennium, having it’s last festival in 2001. Over the years we saw many performers including Jackson Browne, Ben Harper, Mickey Hart & Planet Drum, String Cheese Incident, Ratdog, Leftover Salmon, Los Lobos, David Crosby, Warren Zevon, Ani DiFranco, Taj Mahal, JJ Cale, Richie Havens, Spearhead, Ozomatli, Galactic, Zap Mama, Hank Ballard & The Midnights, Baaba Maal, Richard Thompson, Steve Kimock, and many many more.