Supporters of a peaceful hunger strike that began on July 1st. at Pelican Bay State Prison were in front of the court house at about 6 pm tonight.  http://www.youtube.com/watch?v=dTqot6IGtkY 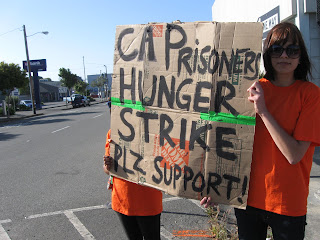 Attention: Beginning July 1, 2011, several inmates housed indefinitely in PBSP-SHU D-Facility, Corridor Isolation, will begin an indefinite hunger strike in order to draw attention to, and to peacefully protest, 25 years of torture via CDCR's arbitrary, illegal, and progressively-more-punitive policies and practices, as summarized in the accompanying "Formal Complaint." PBSP-SHU, D-Facility Corridor inmates' hunger strike protest is to continue indefinitely until the following changes are made:

Here's is a short you tube of the orange mob.
<iframe width="425" height="349" src="http://www.youtube.com/embed/dTqot6IGtkY?hl=en&fs=1" frameborder="0" allowfullscreen>iframe>

The Huffington Post had this.
Posted by Tom Sebourn at 10:26 PM