Save The Kinetic Museum 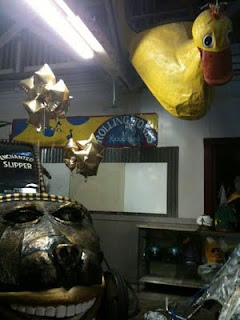 
Kinetic Universe President Kati Texas announced that despite every
effort of fiscal and human power, Kinetic Universe is unable to
maintain the Kinetic Museum at its current location on Ferndale's Main
Street. This repository of sculptures and memorabilia celebrating 43
years of kinetic racing history has changed hands (along with the race
itself) a few times since the retirement and death of the famously
quirky sport's Glorious Founder, Hobart Brown.

"We basically inherited the museum along with the kinetic race when
the Humboldt Kinetic Association folded in 2007," said Texas. "The
building's owner, Sylvia Sterling, was keeping it open out of the
goodness of her heart, as a great Kinetic supporter. We felt a duty to
keep the Museum alive, so we took on a lease. It’s always been a bit
of a struggle for a tiny volunteer organization to preserve this
history, and we are finally accepting that we are rapidly running out
of resources to keep it open."

The Kinetic Museum still attracts visitors from around the world all
year long. Current rent and insurance cost about $6500 per year.

"Kinetic Universe has spent a significant portion of our yearly budget
on the Ferndale Kinetic Museum," said KU Treasurer Emma Breacain.
"Including $12,000 over two years to store Hobart Brown's personal
belongings, which are the property of his son, Justin Brown. Now that
Justin has expressed his interest in preserving the Kinetic legacy and
has resurrected the Humboldt Kinetic Association, we think he is
probably the best person to take on this honor and responsibility.
There are kinetic races all over the world today, but it all started
right here on Ferndale’s Main Street. It's a beautiful little nugget
of Humboldt history.”

"The museum is very dear to us," says Texas. "We have no desire to
close it. It's just a serious chunk of change for something that
brings in no money, and the Kinetic Grand Championship is our main
priority. If we can't find support by September 30th 2011, we'll have
to move on. We're exploring options in Old Town Eureka, and a possible
partnership with a local art gallery to help pay for space. Anyone
with interest in a sponsorship, or with a nice big space in Old Town,
should get in touch as soon as possible."

"The budget to run the race has grown exponentially every year," says
Breacain. “We spent 50% more this year than we did last year, and
we're dancing as fast as we can to make sure our fundraising keeps up.
We've done everything we can. We really hope that someone will
recognize the importance of this special collection and step up to
help."

Interested parties can make their best proposal for saving the Kinetic
Museum by contacting Kinetic Universe at kineticgc@gmail.com