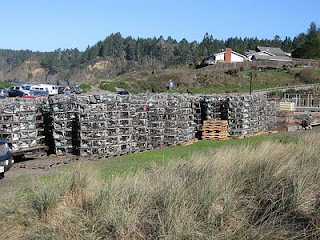 Sacramento – Governor Jerry Brown today signed major fisheries legislation by Senator Noreen Evans (D- Santa Rosa) that will help ensure the economic and environmental sustainability of California’s Dungeness crab fishery.
“It has been a long road getting here, but with the cooperation and close involvement of our fishermen they now have the rules they wanted to protect the future of both our fishermen and the Dungeness crab fishery,” said Senator Evans.


The bill, SB 369, sets crab trap limits, which will prevent large boats from out of state from swooping down early in the season and crowding out state’s fishermen. The bill puts California on an even competitive playing field with Oregon and Washington, which already have crab trap limits.
The new crab trap restrictions, which are supported by the west coast’s largest fishing and marketing association, the Pacific Coast Federation of Fishermen’s Associations as well as the Environmental Defense Fund, will over time reduce derelict gear in the water, preventing entanglements of marine mammals, and will make crab fishing less dangerous.
“Today’s signing was the culmination of a long process involving over several years hundreds of crab fishermen and processors, the Department of Fish and Game, and fishing and environmental groups, and a bipartisan legislature, “ said Senator Evans. “I think this bill shows that disparate groups can work together to create mutually beneficial policy.”


SB 369 follows the recommendations of the former Dungeness Crab Task Force which met in 2010 and proposed legislation to restrict the numbers of crab traps in the water. Under SB 369, fishermen are assigned crab trap limits based on their documented history of Dungeness crab landings. Crab fishermen purchase crab trap permits and pay tag fees which pay for the trap tags and the administration and enforcement of the program. Only fishermen who are eligible to own California crab vessel permits can purchase the crab trap permits.
The bill also:


· Extends the current crab trap vessel permit program, which was due to expire in January 2012 to January 2020. Without this extension, the Dungeness crab industry would be largely unregulated and wide open to anyone wanting to take crab for commercial purposes.
· Reestablishes the Dungeness Crab Task Force to review current programs and issues in the industry and make recommendations to the Legislature and the Fish and Game Commission.
State Senator Noreen Evans represents the Second Senatorial District, including all or portions of the Counties of Humboldt, Lake, Mendocino, Napa, Solano, and Sonoma. Senator Evans Chairs the Legislative Women’s Caucus and the Committee on Judiciary.
Posted by Tom Sebourn at 10:50 PM