Thanks to John for sharing this on his facebook.  It is a letter to the Humboldt Tea Party Patriots. 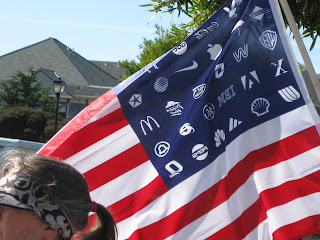 ATTENTION ALL HTPP MEMBERS;
As most of you know, there has been an ongoing demonstration at the Humboldt
County Court House by a group calling itself “Occupy Humboldt”. They have been
... breaking county and city ordinances in regards to unlawful camping, urinating on
building walls and defecating at the entrances of businesses. They have been
removed by police from the court house lawn, only to return, tearing down
temporary fences erected by the County to protect the grounds and are illegally
camping again as of this writing. They have also tried to wrest the microphone
from a member of the news media while being asked questions. On the 11th of
November, Veteran’s Day, they hauled down the American flag flying at the Court
House. There have also been death threats to some members of the news media.
So far, the Humboldt County and Eureka City governments have done very little to
uphold local ordinances. They took an oath to uphold the California State and
U.S. Government Constitutions. To do nothing only shows a weakness on the part
of the governing body which emboldens the law breaker.
I invite you to join us at the Humboldt County Supervisor’s meeting at the County
Court House on November 15th to participate in the public comment period at
1:30 P.M. and the public comment period which is held shortly after the start of
the Eureka City Council meeting beginning at 6 P.M., also on the 15th, at Eureka
City Hall located at 6th and K Streets. Even if you do not want to verbalize, your
presence would be appreciated. If you can’t make the afternoon meeting
because of work commitments, you have another chance in the evening.
This is your County and City. We cannot allow lawlessness to rule. See you on the
15th!! Encourage your Veteran friends and members of other patriotic
organizations to also participate. Insist on protecting our rights as law abiding
and tax paying citizens.
Fred Nelson, HTPP Chair
Posted by Tom Sebourn at 2:25 PM