The Stand Up & Shout Out forum held today at the Eureka Women's Club seemed to be a success.  There was a slide show, a poem, singing, food and lots and lots of speaking up and some shouting out too. 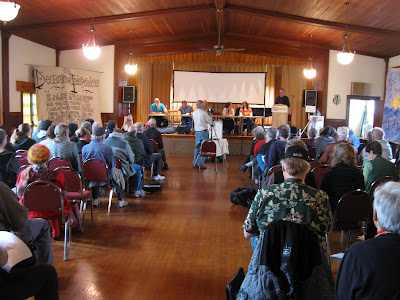 David Boyd did the welcoming followed by inspiration and poem with Jerry Martien.  Dan Faulk was the moderator and motivator.  The panel ended up being john Hockett of the Civil Liberties Monitoring Project, Peter Martin of the ACLU, Verbena Lea of Redwood Curtain CopWatch, Tracy Rain Attorney and Homeless Advocate, James Decker of Occupy Eureka and myself.

The goal was to get together and discuss ways to restore our First Amendment Rights and to address the County of Humboldt that by direction of the Board of Supervisors will discuss and possibly vote on what they are calling an emergency ordinance to deal with the protests on the east side of the Humboldt County Court House.  One thing most people agreed on was that there should be a big crowd at the Court House this Tuesday morning at 8 am to greet the Supervisors as they arrive.