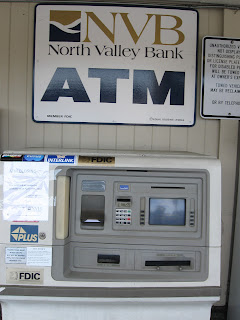 The ancient North Valley Bank ATM in Trinidad is being removed.  The ATM is one of the older models that sucks your card into it and usually gives it back after your transaction.  It was famous for not working. That never surprised me though because it is made by Diebold, the same company that used to make faulty voting machines. Locals knew that if the machine didn't work the first time, try it again. About 9 times out of 10 if you did your transaction twice, it would work on the second try.  Tourists however didn't know this and they would complain to the bank.

I went into the main branch in Eureka and made a complaint one morning and one of the nice ladies there told me that they get many complaints about that old machine and that if they got many more, they would be forced to remove it.  She said it was more cost effective to remove the machine than replace it with a modern one.  On April 17th. the machine will go and it is not to be replaced.  North Valley Bank is where I bank and I liked the convenience of not having to drive to Arcata or McKinleyville to use an ATM without paying a fee.  There are still ATM's in town, one at the Chevron across the street and several at the Casino down the street.  None of those are from local banks though and  all have major tolls attached to them.
Posted by Tom Sebourn at 10:38 AM