Expressing our outrage and demanding that the wealthy and corporations

pay as we must!
No More Rigged Tax Codes! 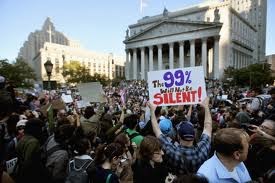 We've had enough!
Not only do corporations like Bank of America get away with dodging taxes,Wells Fargo has paid none in recent years, while millionaire CEOs of these unpatriotic companies get huge tax refunds each year thanks to the Bush tax cuts.
Wells Fargo was also handed another $37 billion from the U.S. government. Flush with billions in bailout money and an economic system designed to siphon wealth from the working class to the idle rich, Wells Fargo has been busy expanding its stake in the GEO Group, the second largest private jailer in America.
We Rally and March to help expose these  tax-dodging banks and corporations in highlighting the disparity of tax codes for the 99% compared to the 1%.
Where: Humboldt County Courthouse
When: April 17th. Noon
Posted by Tom Sebourn at 12:23 PM