Pilot Rock Ramblers And Other Stuff At The Trinidad Fish Festival 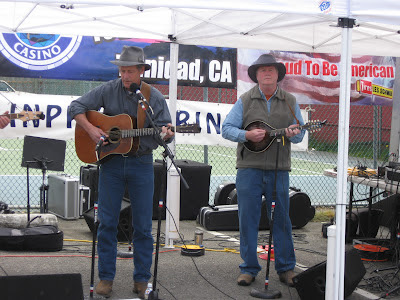 It goes until 4 pm today.  Starting out the music this year was the band "Pilot Rock Ramblers". Here is a short video of them.  They are a great Bluegrass band and the crowd seemed to enjoy them as they shopped, drank and ate fish. 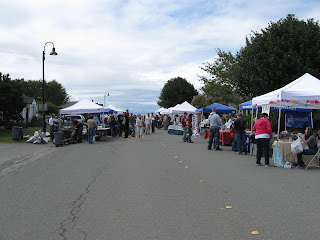 For the past 2 or 3 years this has been mostly a wind festival so it was nice to have cloudy skies and muggy conditions for today's fish festival. Hardly any wind, bouts of pure sun and even a short rain shower or two.


There was an entire area devoted to kids in the Town Hall and even rides up to the lighthouse with tours. 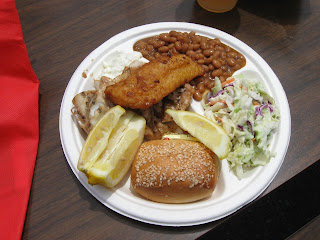 Posted by Tom Sebourn at 1:54 PM No comments:

Tonight's Humboldt Crabs game has been cancelled due to rain out.  They are going to try to reschedule it for sometime this weekend but have not gotten back to me yet so that I can tell you when or program it for the radio broadcast.  Check back here and when I know, I will update this post with the info.

UPDATE: Today will be a double header with the first game starting at about 3:30 pm and a 7 pm game to follow. 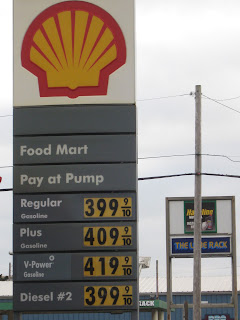 This evening while leaving Eureka heading north on U.S. 101 or 5th. Street at the north end of town as some know it, I passed by the Shell station and was surprised to see that the price for regular gas with ethanol had dropped to $3.99 a gallon.


Looks like there will be some bad economic news Friday. Although gas and diesel are now the number one export of the U.S., prices have finally fallen even here in Eureka Ca. as even the rest of the world doesn't have that much money to spend on gas right now.
Posted by Tom Sebourn at 11:47 PM No comments: 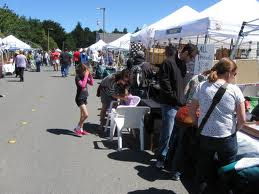 The 55th. Annual Fish Festival in Trinidad Ca. is this Saturday June 23rd.

There will be live music from the Pilot Rock Ramblers starting at 11am. There will be more bands, arts and crafts booths, trips to the Trinidad Head Lighthouse, beer and wine and of course fish dinners in the afternoon. You have your choice of salmon or white fish or a combination of both. 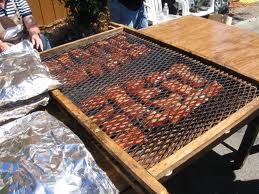 Festival starts at 11 am and goes until 4 pm but fish may run out sooner.
Save a seal and get a message from Trinidad Massage and Day Spa.  A 10 minute massage for $10 dollars will feed a seal for a day.  All proceeds from massage that day benefit the North Coast Marine Mammal Center.
Posted by Tom Sebourn at 11:31 PM 1 comment: 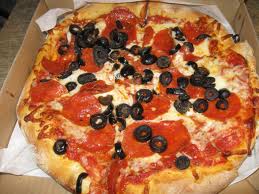 , – McKinleyville Parks & Recreation invites all teens in 6th through 12th grades to join us for a FREE Pizza Party as we talk about how you want YOUR designed.  That’s right!  We are in the process of designing a 7,000 square foot Teen & Community Center next to the at .

This is a very exciting part of McKinleyville history and we encourage you to become involved.  Our staff will also share information about how to be a part of our Teen Advisory Council to help us design the teen center and also give us ideas on what type of program and events we should offer.  It’s also possible that we might have paid positions on the Youth Advisory Council.

So please get involved and join us for FREE pizza and drinks…  Please call Jason at 839-9003 for more information.

Ordinance on Uses of County Properties 9 AM Tuesday At Humboldt Co. Courthouse

Dear Board of Supervisors,

I write regarding this Item on Tuesday's agenda:
H. DEPARTMENT REPORTS
County Administrative Office
1. Ordinance on Uses of County Properties.
RECOMMENDATION: That the Board of Supervisors receive a report from staff on feedback gathered from various stakeholder groups regarding an ordinance on appropriate use of County properties; and provide additional direction to staff as may be warranted.

I have attached the board report, bosagendaitem June 19.pdf.

Not mentioned in the report is that David Kahn, of Renne Sloan Holtzman Sakai LLP has filed the Memorandum of Points and Authorities in Opposition to Plaintiff Janelle Egger's Motion for Preliminary Injunction. This response was authorized by the Board of in closed session on June 5th.

The motion asked the Court to enjoin the County, the District Attorney, Sheriff Downey and Interim Eureka Police Chief Murl Harpham, their agents and employees from enforcing the ordinance, instituting or continuing legal proceedings related to arrests under the ordinance, or enacting a countywide ordinance until a final court ruling in the case. The hearing on the motion is set for July 6th.

The lawsuit, among other things, asks the court to declare the ordinance unconstitutional or invalidating those portions that restrict First Amendment rights and to monitor the planned enactment of a countywide ordinance. I filed the lawsuit because I felt the County had erred and thought it best to clear the slate and begin with an understanding of the rights and responsibilities of the County. It is a legal question, and the answer is necessary to provide guidance during any political discussion of regulation of county property that could impact First Amendment rights.

I hope that Mr. Smith-Hanes will in his oral report update the Board and public on the progress in defending the ordinance, as the Court is another agency involved in this process. This is information could not be in the report, for on the day he wrote the report Mr. Yang of Renne Sloan Holtzman Sakeai LLP and I were getting documents to the court to allow them time to respond on behalf of the County.

I commend Mr. Smith-Hanes not taking the easy rode of simply telling the Board what you want to hear, and for presenting the options of beginning the process of repealing this ordinance and spending scarce resources looking for solutions to the issues raised by the various stakeholders he met with. I urge you to adopt those options.

While I understand staff's wish to have clearer guidelines in the future, I suggest the guidelines should focus on guiding staff's response rather than placing regulations or restrictions on citizens exercising their First Amendment rights. As difficult as it may be, that may first require a hard look at the response over the last eight months. May it give birth to a renewed hope and faith in ourselves and our First Amendment principals rather than more rules, regulations and police actions to divide us.

Lastly, I share with you this link to a slideshow, which celebrates the variety of people that have come to the front of the courthouse to assemble and /or express themselves and provides a brief and poignant account of Occupy Eureka. I have also attached a PDF version that allows you to access the sources of the photos found online. I ask that this correspondence and the PDF document, Eureka Courthouse Demonstrations become part of the public record available online.

Janelle Egger
Posted by Tom Sebourn at 9:32 PM No comments: 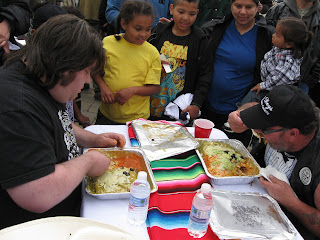 Yesterday at the Eureka Summer Concert Series first concert of 10 for the season, a contest was held.  Who could eat the most Rita's BurritoExtremo, a delicious 5 pound burrito.  Four brave and hungry contestants stepped forward during the break of the reggae band 'Top Shelf" to get to the bottom of this extreme dish.  Each contestant had their own with 5 minutes to see who could finish the most.  See the video for more. 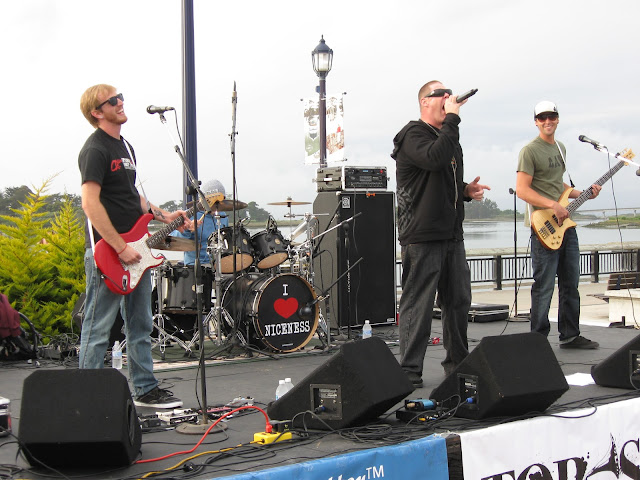 Crowds were smaller for the first concert of the season due to weather.  Rain was predicted but it was a no show.  The next concerts are at 6 pm Thursday night on 1st and C Streets in lower Old Town on the water front boardwalk and run for a total of 10 concerts. 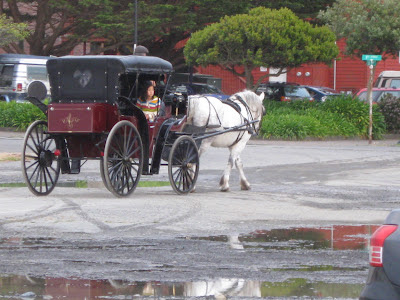 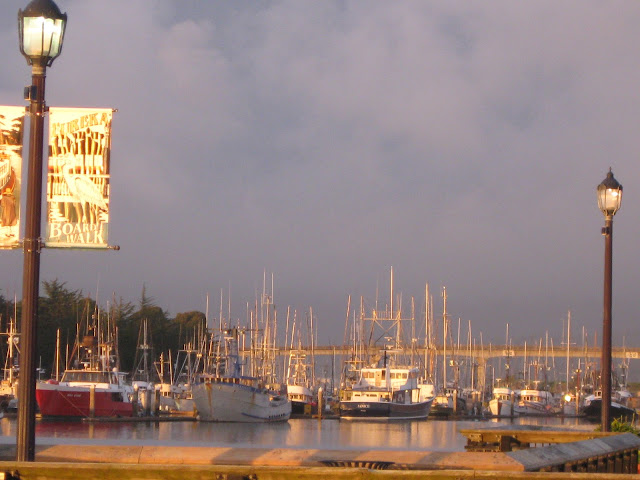 The sun came out at the end of the day and made for some great pictures of the bay.
Posted by Tom Sebourn at 9:55 PM 2 comments:

Republicans That Should Be Called Traitors For Trying To Crash The U.S. Economy

Non-lawmakers present Newt Gingrich
Read the story at the Daily Kos and you will see why the Republicans above should be declared enemies of the U.S. at the very least and Traitors in my mind.
Posted by Tom Sebourn at 5:24 PM 1 comment: 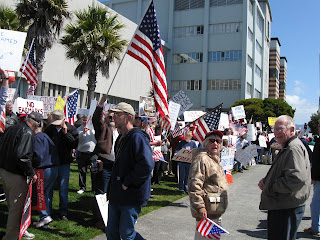 A lawsuit challenging Humboldt County’s urgency ordinance was filed May 24, 2012 by Janelle Egger with the 9th Circuit Federal Court in San Francisco.  Yesterday afternoon Robin Donald visited the Humboldt County Courthouse and served the summons and Complaint.  Both are members of the Occupy Civil Liberties Working Group.

In her suit, Egger points out that the March 27 ordinance imposed restrictions on the area in front of the courthouse that is a traditional public forum where free speech and assembly are constitutional protected.  The suit asks the Court to declare the ordinance unconstitutional, remove the restrictions from the Humboldt County Code and monitor the planned enactment of a countywide ordinance.  The court filing fees for the suit were provided by the Humboldt Civil Liberties Defense Fund.

Along with other demonstrators, she was arrested by Sheriff's deputies on April 8th for being present on the Courthouse grounds after 9:30 PM. "We can not allow our government to restrict our right to peacefully exercise our First Amendment rights," says Egger.

“There was not a problem until the County and Eureka Police Department decided they were going to impose new rules on Occupy Eureka back in November.”  Egger was active with Occupy Eureka from early November until her arrest.  Since then she has committed her time to restoring First Amendments rights that were restricted under the urgency ordinance.

Egger, who lives in Fortuna with her husband where they raised two children, has lived in Humboldt County since 1973.

Occupy Civil Liberties Working Group sponsored the March 24th Stand Up & Shout Out Forum To Protect and Restore Our First Amendment Rights.
The text of  complaint is available online at:
PACER https://ecf.cand.uscourts.gov/cand/index.html
or at https://docs.google.com/open?id=0B-uTx6HuabZ7M255WldBbjNXLVk

The march 27, 2012 agenda board report is available online at:
https://docs.google.com/open?id=0B-uTx6HuabZ7TmE4UmJTdEl2T3c
Posted by Tom Sebourn at 11:53 AM 1 comment:

Saunder's Park will have two fireshows by Circus of the Elements. One is at 8pm followed by another at 9pm. The Afterparty at the Ocean Grove will have music by two bands, Ras Melbourne with the Survival Band, and the IRM Band with Sam. Admission is only $5, show is at 9pm.

Come by the Trinidad B&B for live classical harp music with Howdy Emmerson.

JD Jeffries, Joe Garceau, and Tim Breed will all be playing there own original music at various venues.

Come by the Town Hall to view beautiful photography by Wendy Carney. There will also be an entire panel of musicians and songwriters playing throughout the evening

Make sure to stay tuned with the events schedule to see what the businesses are up to.

Here is the complete schedule

The Clam Chowder cook off was Wednesday.  Yesterday was the Fireman's Muster. 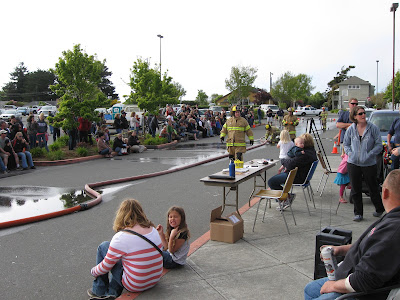 Tonight, according to the North Coast Journal is the Pony Express Dance at Blue Lake Casino’s Sapphire Palace.  Live music by Merv George and a Boot Contest - 8pm - tickets are 10.00.  21 & over.  Discounts given at the hotel for dance attendee’s. 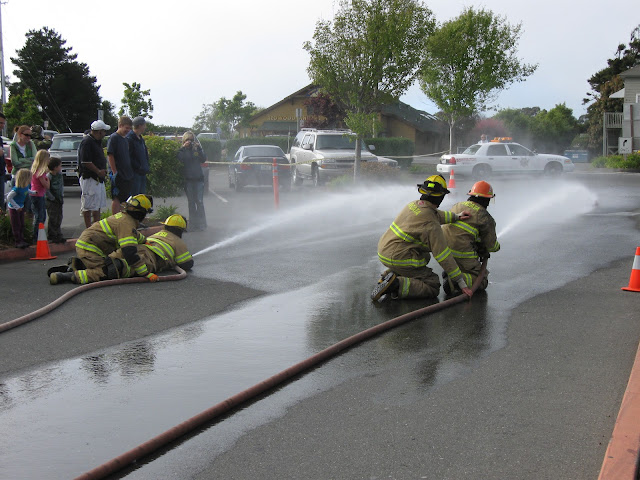 Tomorrow is the parade which will have Central Avenue in McKinleyville closed for a bit starting just before 11 am.  After the parade there will be a big festival in Pierson Park from Noon to 4 pm.  Food and craft booths, kids activities, a horse shoe tournament, live music and beer garden.


Here is a link to the McKinleyville Press that has a history of Pony Express Days.
Posted by Tom Sebourn at 11:02 AM No comments: