Rainbow Around The Sun, Is A Storm Coming? 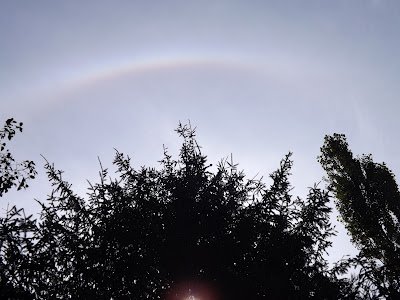 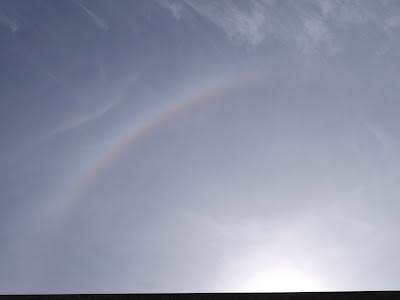 To answer my own question, no. The 7 day forecast from the National Weather Service says sunny skies through Wednesday. 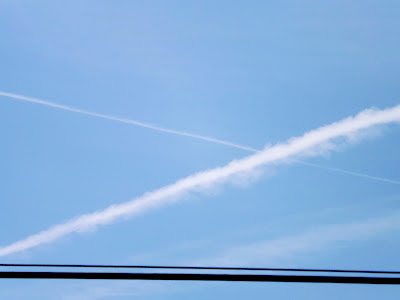 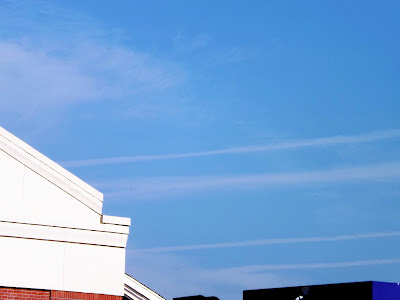 There are a lot of contrails in the sky today over Eureka/Arcata/McKinleyville.  These aren't visible along the coast due to low fog but if you get a couple of blocks inland you could see the circle in the sky around the sun and lots and lots of contrails.  Some say that these are chemtrails as shown in this video. Either way locals can forget about an Autumn sky of blue today.

Eureka, California - After months of efforts to bargain a historic first wage increase for County IHSS Caregivers, the Humboldt County Board of Supervisors (acting as the Governing Board of the IHSS Public Authority) rejected a Fact Finder’s recommendation to increase wages for over 1,400 County IHSS homecare workers. The Fact Finder understood the urgency and growing health care crisis facing the residents of Humboldt County. The Fact Finder referred to his ruling as “fair and equitable,” stating that the reasons for his ruling were “numerous.”“This is beyond shameful, it is offensive and says more about their commitment to turn their backs on our County’s most vulnerable and the Caregivers who change adult diapers,” said County IHSS Caregiver Antoinette Skiles when she learned of the Supervisor’s response to the Fact Finding Report. “We use money out of our own pockets to care for people who would most likely be in nursing homes without us. We love the people we care for and that’s why we do it. But we shouldn’t be punished because we have a heart,” she added.In his ruling, the Fact Finder emphasized that, “The County clearly has the ability to pay the modest increases sought,” and that the homecare workforce, which is comprised primarily of women and minorities, is paid significantly less than every other County employee. Many facts included in the Fact Finding Report, such as the Supervisor’s willingness to increase their own salaries while homecare wages remained stagnant over the years, were accentuated by a recommendation that stated, “When it came to the issue of wages and healthcare benefits for care providers, the Union makes the more compelling case.”The two day Fact Finding Hearing covered an exhaustive amount of data and testimony from County Caregivers, recipients and university professors Eileen Boris and Candace Howes. Both Boris and Howes are national experts on long-term care whose efforts have been used to influence national, state and County long-term care legislation. After reviewing documents and testimony from the County and CUHW, the Fact Finder awarded his decision: Humboldt County IHSS Caregivers deserved better.Last Tuesday the Board of Supervisors met in closed session to discuss the Fact Finding Report, ultimately not only refusing to implement the report’s recommendation but also attempting to discredit the Fact Finder in the process. In an official statement released on behalf of the County IHSS Public Authority the County claimed that the Fact Finder “misunderstood” important concepts during the hearing. In that same official statement, the County repeated that its refusal to grant a wage increase to County IHSS Caregivers was, “due to the County’s finances,” this despite admitting during the Fact Finding hearing that it in fact had budgeted enough to provide the requested wage increase.The Supervisor’s recent rejection of the Fact Finder’s recommendation follows their rejection of a mediated settlement proposal last July that also called for a wage increase for County IHSS Caregivers. CUHW has filed an Unfair Labor Practice against the County and will continue its efforts to work with the residents of Humboldt County to achieve justice for its most vulnerable populations and those who care for them.Call the Humboldt County Board of Supervisors (707.476.2396) today and tell them: The facts don’t lie. Implement the IHSS Fact Finder’s Recommendations and be fair to those who care. End the shame of minimum wage:View the Fact Finder’s entire Report and Recommendation at: http://co.humboldt.ca.us/publicinfo/docs/2012-09-25_h12-079-factfinding--cuhw-humboldt.pdfView the Board of Supervisors press release at:http://co.humboldt.ca.us/publicinfo/docs/2012-09-27%20-%20statement%20by%20public%20authority%20for%20ihss.pdf.Loretta StevensExecutive DirectorCalifornia United Homecare WorkersAFSCME/SEIU Local 40342484 Natomas Park Drive #101Sacramento, CA 95833(916) 239-3988 office----
Posted by Tom Sebourn at 4:10 PM 6 comments:

Michael Savage Off The Air For Now

What do you have to say about Michael Wiener's departure  from the main stage?
Posted by Tom Sebourn at 11:57 PM 3 comments:

One Restaurant Opens, Another One Closes

One restaurant opens and another closes here in Trinidad Ca. 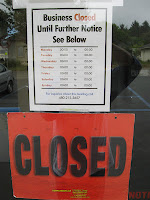 I went to The Trinidad Bay Eatery this morning and noticed that there were no cars in the parking lot.  That's strange I thought, they must be closed.  A sign on the door said Closed and the place was cleared out.  There were only empty shelves in The Gallery gift shop that was in the same building. I was sad. What could have possibly happened to make such a busy restaurant just close without warning?  They had been going non stop since 1975.

I called the phone number for the Eatery and got the former owner, Carolyn Phillips. She and her husband Sam still own the building but had sold the business 10 years earlier.  She said that she and Sam had sold their house in the bay area and moved back up to live above the now empty restaurant. Carolyn also said that the people that were running the place left when their 10 year lease was up.  They had two 5 year options but decided not to exercise them. There is more to the story but most important is that the business could reopen if someone wanted to sign a new lease.  Here is your chance to run a successful business in beautiful Trinidad half a block from the Lighthouse and the Pacific Ocean. If you are truly interested in this call Sam or Carolyn Phillips at 707-677-3777. 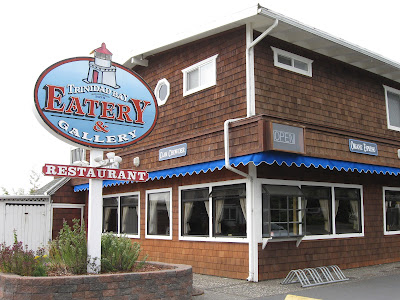 Across town where Kashie's Catch Cafe used to be is a newly refurbished Lighthouse Grill almost ready to open. An addition to the building will allow for inside dining. They will offer burgers, fish, beef brisket, savory waffle cones and homemade ice cream. The new owners already run Humboldt Homemade Meals and they try to use as many local ingredients as possible with Humboldt Grass Fed Beef and buying from the local farmers markets and other resources. I have tasted some of their catering and can say for sure that these people know what they are doing. They deliver from Trinidad to Eureka and if you are interested in their meals check the link above.  I am looking forward to their grand opening soon, they are hoping that will be in about two weeks from now, give or take a bit. 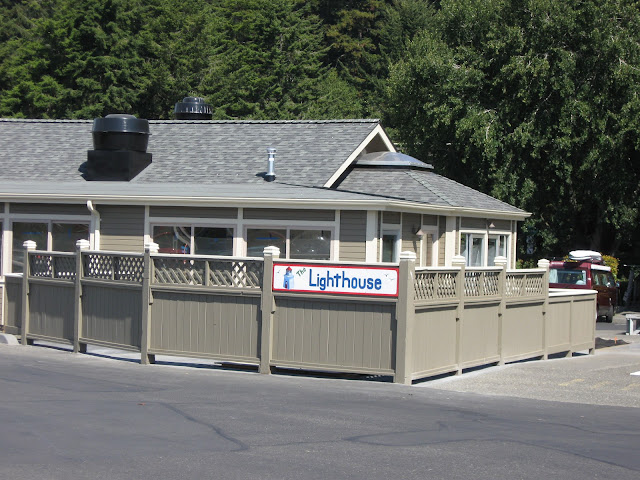 A Pronounced Warming Event Occurred On the North Shelf This Spring, And This Will Have A Profound Impact Throughout The Ecosystem

Common Dreams
Ocean temperatures -- from the ocean bottom to the sea surface -- off the northeast coast of the U.S. have soared to their warmest ever, the National Oceanic and Atmospheric Administration (NOAA) said Tuesday.
The soaring temperatures follow other warming trends recently noted by the NOAA:  we just experienced the fourth warmest August ever, the third warmest summer, and the warmest first 8 months of the year ever. 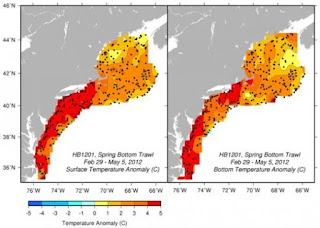 Read more at Common Dreams
Posted by Tom Sebourn at 12:25 AM 1 comment:

Kevin Hoover Takes On Voter Apathy, Board of Supervisors and 9/11 Truth

Kevin Hoover of the Arcata Eye takes on voter apathy and lack of involvement. He also takes on the Humboldt County Board of Supervisors. And it wouldn't be complete without poking some fun at yours truly and the 9/11 Truth movement for failing to understand how 2 planes can knock down 3 sky scrapers in New York.

It All Started A Year Ago In Zucotti Park. 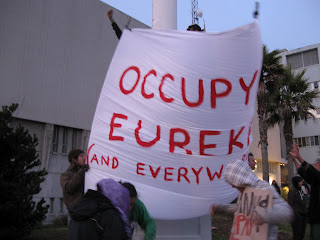 Gatherings took place all over the country and beyond this weekend celebrating the one year anniversary of the Occupy Wall St. movement.

A local gathering has been planned for 5:30 pm on Monday at the Humboldt County Courthouse.

Here is more on the history of the movement from the Huffington Post. and also here at Alternet.
Posted by Tom Sebourn at 11:55 PM 2 comments:

Is The DEA Trying To Cover Up It's Medical Marijuana Raids?

9/11 In 5 Minutes, The Condensed Version

9-8-2012 PROCLAMATION BY THE GOVERNOR OF THE STATE OF CALIFORNIA Soon after the outbreak of war in 1846, United States forces invaded the Mexican province of Alta California. Seven months later, on January 13, 1847, representatives of both countries signed the Treaty of Cahuenga in the San Fernando Valley, ending the fighting. For three years thereafter, California remained under American martial law. During this period, our population exploded following the discovery of gold, giving impetus to the demand that California be admitted to the Union. In 1849, leaders from around the future state met in Monterey to draft the first constitution, which was approved on November 13 of that year by a vote of 12,064 to 811. Peter Burnett was elected governor, and in January, 1850, the State Legislature began its first two-year session. As our lawmakers went about establishing the basic institutions of state governance, the United States Congress argued about whether to admit California to the Union as a slave or free state or as two separate states, one slave and one free. The issue was resolved by the famous Compromise of 1850, and on September 9th of that year California was admitted to the Union as the 31st state. The observance of Admission Day was once prominent in the civic life of our state and nation. On September 9, 1924, by order of President Coolidge, the Bear Flag flew over the White House in honor of California’s admission to the Union. In 1976, I vetoed a measure to remove the observance of Admission Day as a state holiday, writing: “For 125 years California has celebrated its admission into the Union on September 9th. To change now comes a bit late in our history and hardly seems in keeping with the Bicentennial Spirit.” In 1984, however, Governor Deukmejian signed legislation eliminating our traditional observance of Admission Day on September 9th in favor of a “personal” holiday—convenient to some but in no way respectful of our storied founding. California’s early history is too often neglected in schools and among our citizens. For that reason, I call upon Californians to pause and celebrate Admission Day this year by reflecting on how it was that California became the 31st state. NOW THEREFORE I, EDMUND G. BROWN JR., Governor of the State of California, do hereby proclaim September 9, 2012, as Admission Day. IN WITNESS WHEREOF I have hereunto set my hand and caused the Great Seal of the State of California to be affixed this 8th day of September 2012. ___________________________________ EDMUND G. BROWN JR. Governor of California ATTEST: ___________________________________ DEBRA BOWEN Secretary of State
Posted by Tom Sebourn at 5:25 PM 1 comment:

The 13th. Annual Storytelling Festival by the Sea will take place this weekend at the Trinidad Town Hall.  This years two day festival coincides with Arts Alive! on Friday and is followed by a catered dinner and more storytelling on Saturday September 8th. I think it is too late to get in on the dinner as the caterer needs advanced notice.  You can always ask by calling 707-677-3840. 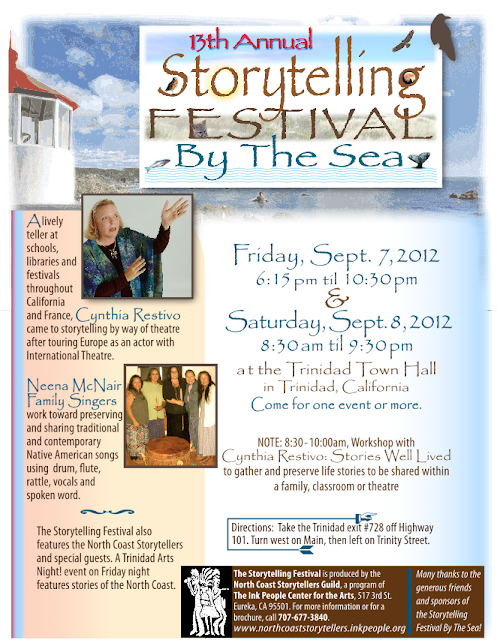