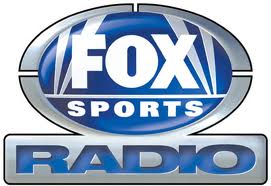 What used to be the Flagship Thom Hartmann station in Oregon is switching its format from Progressive Talk to Sports.  10-Thousand watt powerhouse KPOJ AM is owned by Clear Channel which was acquired by Bain Capital in 2008.  KPOJ will now be a Fox Sports affiliate.

Stephanie Miller got moved to overnights in Detroit.

Radio host Mike Malloy said tonight on the air that we can expect to see more stations across the country make the change from Prog. Talk to Sports or what ever as the mega corporations do what they can to marginalize the progressive message. Malloy said the message wouldn't go away though, it will just move from terrestrial radio stations to online forums, pod casts and internet radio. He explained that this was already happening with i phones, droids and other newfangled stuff. 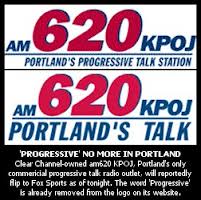 I can confirm that a couple of new sports networks are on the scene and they are going after stations hard to get them to change to their new ESPN alternative. I don't foresee a change at KGOE but you never know what lies ahead. If the programming is still available and we are still selling ads, we'll probable be around for a while.

Here is Bradblog's take on the story.
Posted by Tom Sebourn at 9:38 PM