I am not a scientist and don't pretend to know the difference between one GMO crop and another. I do know that a crop that is poison to insects might not be good for us. Thom Hartmann used to talk about this study and I thought since Monsanto has been granted immunity from liability if their crops go astray, I should share it with you.

In 1999 Professor Elaine Ingham of Oregon State University published the results of research that should make us all wonder about the trustworthiness and efficacy of the oversight and regulation of the federal government. She and a graduate student tested a common soil bacterium that had been genetically engineered to produce alcohol from plant debris, a GMO bacterium that had already gotten EPA approval for release in the open. The idea was that, after the alcohol was produced, the remaining debris containing the bacteria would be dumped back on the fields as fertilizer. Her experiments showed that when wheat seedlings were grown in soil containing the genetically engineered bacteria (GMOs), the seedlings all died. Professor Ingham then testified about the ramifications of her experiments: “These bacteria would therefore get into the root systems of all terrestrial plants and begin to produce alcohol. The engineered bacterium produces far beyond the required amount of alcohol per gram soil than required to kill any terrestrial plant. This would result in the death of all terrestrial plants, because the parent bacterium has been found in the root systems of all plants where anyone has looked for its presence. This could have been the single most devastating impact on human beings since we would likely have lost corn, wheat, barley, vegetable crops, trees, bushes, etc, conceivably all terrestrial plants.” Needless to say, the company involved did not go forward with its plans for commercial release of that GMO, no thanks to the EPA.

When you work for a radio station, people often give you stuff in appreciation of having your particular radio station around. Where I work there are 5 stations, 2 am stations and 3 fm music stations. Those 3 fm stations get deliveries from their listeners in the morning from everything from breakfast to massages, hair waxing, pizza and a whole host of other goodies and services. I spend most of my time on the am stations, sports and news talk, and we don't get as much cool stuff as our fm colleagues. But when we do, it can come in the form of tickets to events, books, I got a custom made t-shirt from a listener. One of the more cool items we have ever received was a skate board. It didn't have any trucks or wheels on it which is OK since I don't skate board anymore due to my age and the lousy health care coverage we have in this country. 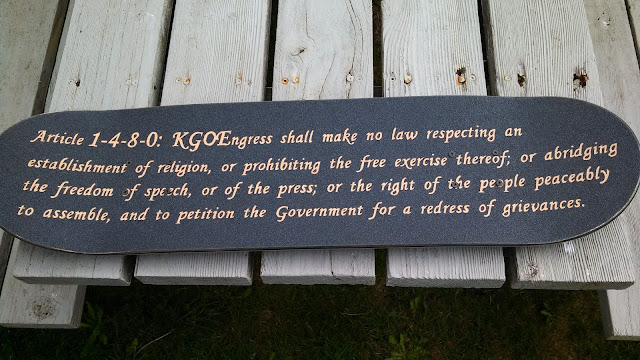 Daniel Caspary of  "Rip Stick Grip Trickery" decided to show off his art and wares by etching into emery cloth like grip stuff, the First Amendment to the US Constitution. It is appropriate since we are constantly pushing the free speech part as part of our format.

What is cool about Daniel Caspary's designs is that they don't have to be on a skate board. This grip stuff can be fastened to stairs or other places you might need to get a grip and he can etch any message into it. Imagine having your company name on the stairs leading up to your suite? Caspary can do it.

If you are interested in having a design or message etched into something that needs more grip give him a call.

Driving by the Bayshore mall yesterday I couldn't help but notice a large red banner hung where the sign used to be for Barnes and Noble. The business climate in Eureka must be improving if businesses are moving here. Heck, we just got the Walmart and now TJ Maxx. Eureka may soon find enough businesses to fill the south wing of the mall where there are almost no shops. This was the topic of a recent rant by local Right
Winger Tom Cookman on the KINS Community Comment. He recently took a trip to Arizona and couldn't believe the bustling businesses there. The mall he went to twice in one day was busy both times. The problem with California is that we chase businesses away Cookman says. This has been a truth for decades. Fact is though that more stay than leave. This is why in liberal bastions like San Francisco, Laguna Beach and Arcata, one can hardly find a storefront to rent if one wants to open a retail business. Contrast that with conservative bastions like Stockton, Eureka and Riverside where empty storefronts are everywhere.

Tom Cookman is right that it is much harder to do business here in California but his analogy was poor. There are malls all over this state that are full just as the one Cookman visited in Arizona. There are also malls all over this state that look more like the Bayshore Mall here in Eureka. My only point to Mr. Cookman is that just because a municipality is more progressive or as he says "liberal" doesn't mean it is a bad place to do business. Did you ever try to book a convention in San Francisco? The dates are not exactly wide open. For some reason businesses like to be in places like San Francisco or Santa Monica even though the minimum wage is higher, there is almost no parking and the places are crawling with so called liberals.

California will continue to create more jobs than we export, it's what we have always done. California will also continue to be a better place to live and raise a family than many other places and that's why opposites like myself and Tom Cookman still choose to live here.
Posted by Tom Sebourn at 10:37 AM No comments:

So Humboldt County will go for paperless voting. Installed in our precincts at the next election will be unverifiable electronic voting machines made from Hart InterCivic and the paper trail will be gone. In it's place, a proprietary secret code that encrypts and finagles our votes.

A flaw in the voting machines the county currently uses  was discovered by some folks here in Humboldt County by using a digital camera to scan the paper ballots. A percentage of them were scanned and checked for accuracy and things weren't right.

My problem is the loss of a paper trail. Without a paper trail the flaws found in the current system would not have been found. Where does this leave us? I will contact our Registrar of Voters Carolyn Crnich. to confirm that the machines will in fact be counting our votes in secret.

Good News!
Turns out that the Hart machines we are getting will not be to vote on. These are not the same machines that each precinct has for handicap voters. Those are still suspicious to me but this is not what the new laptop devices are for. The Humboldt County Registrar of Voters has assured me that the new machines are just to replace the paper roster that you sign when you first come in to vote. We will still be able to vote on Paper that will be scanned by the other robot that has been fixed of it's known flaws.
Posted by Tom Sebourn at 10:36 PM 2 comments:

Eureka Voters Will Decide Minimum Wage At The Ballot 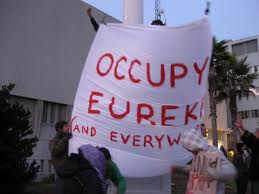 It's a long way off, but on November 4th. of 2014, Eureka voters will have the chance to do what the Eureka City Council chose not to do, raise the  minimum wage to $12.00 per hour.

The Humboldt Sentinel has the story and why progressive council member Linda Atkins voted against sending the job to voters.

“I’m glad we’re finally able to move forward. The real winners today are the people we care for. Better pay for county Caregivers means better care for our seniors and disabled,” said Lewis following a closed session where the county’s Board of Supervisors, acting as the Governing Board of the IHSS Public Authority, approved an agreement that included a historic first-time wage increase for county homecare workers.

The agreement comes after nearly two years of efforts to bargain a first-time contract for county homecare workers that included weekly testimony at Board of Supervisor meetings, public rallies, a Fact Finding hearing, multiple mediation attempts, and an extensive media campaign. County homecare workers were joined in their efforts by the county’s seniors and disabled, fellow labor organizations, faith leaders, elected officials and various county residents and organizations supportive of homecare. Prior to the agreement, county homecare workers had never received a wage increase above the state minimum wage.

“Today is a great victory for homecare workers that have lived in poverty for over a decade in Humboldt County. I’m happy that our members now have a chance to ratify their first ever contract,” said CUHW Statewide President Gail Ennis.

The agreement has yet to be ratified by county homecare workers and must also receive final approval from the state and county before the negotiated wage increase takes effect. A mail ballot election will be conducted by a state mediation service to ratify the agreement.


Defending the Community
$12.00 An Hour Minimum Wage for Large Employers
http://fairwages.org
http://eurekafairwageact.wordpress.com
info@fairwages.org
Posted by Tom Sebourn at 11:15 AM 3 comments:

Have You Seen This Rocking Horse? 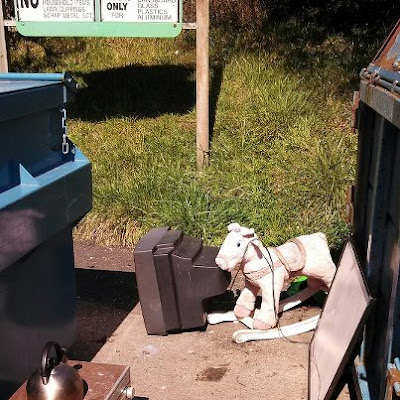 I went to dump the recycling at the Trinidad Civic's Club free recycling center in Trinidad today. Someone before me decided that a TV, stereo, framed poster, tea pot and an old fuzzy pink rocking horse were recyclable but didn't fit into any of the categories offered at the self policed recycling center. The rocking horse looked old with carved wooden rockers on the bottom. If you know of the perpetrator of this crime please tell them not to dump their junk at the recycling center. The junk goes to the McKinleyville Transfer Station on Central Avenue. This would have cost about 10 dollars to dispose of and almost nothing had they sent the stereo and TV to a free e-waste event.
Posted by Tom Sebourn at 4:33 PM 7 comments: 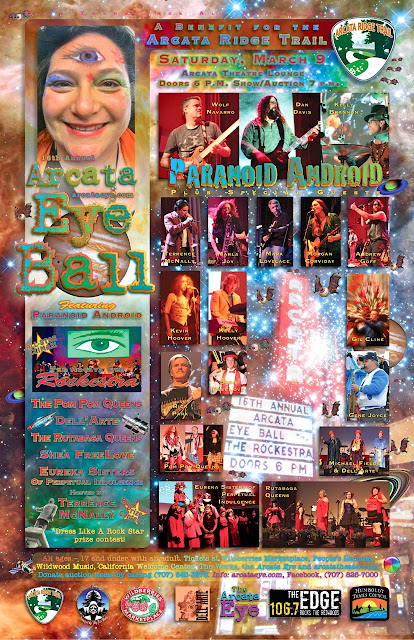 It is a benefit for the Arcata Ridge Trail.

At the Arcata Theater Lounge, doors open at 6:00 PM and show starts at 7:00 PM. There will be stuff and things going on that you would not know about if you don't go, so be there, but not until after I have my ticket because I don't want to be left out and I didn't get my ticket yet.
Posted by Tom Sebourn at 10:22 PM No comments:

There will be a meeting at the Town Hall in Trinidad Ca. to discuss saving the forest around Strawberry Rock from logging by Green Diamond Resource Company.

The Humboldt Sentinel has the story including more pictures and details.

Posted by Tom Sebourn at 2:30 PM No comments:

FOR IMMEDIATE RELEASE - March 6, 2013 - Bumble Bee Foods, LLC, has issued a voluntary recall on specific codes of 5-ounce Chunk White Albacore and Chunk Light Tuna products. The recall has been issued because the products do not meet the company’s standards for seal tightness.

Loose seals or seams could result in product contamination by spoilage organisms or pathogens and lead to illness if consumed. There have been no reports to date of any illness associated with these products.

Posted by Tom Sebourn at 2:48 PM No comments: