State Of Oregon Caves To GMO's And Big Agra - March Against Monsanto This Saturday!

In case you missed it. Last week, the state of Oregon passed a bill to remove local control over agriculture  from counties to the state. Counties will no longer be able to decide whether GMO’s or experimental crops may be grown in their jurisdictions.

According to Food Democracy Now.org
after dying in committee during the regular session earlier this year, SB 863, formerly known as SB 633, industrial ag corporations joined forces with the notorious ALEC and Koch brothers to slip this seed preemption bill into an unrelated emergency PERS tax and pension bill in Oregon. 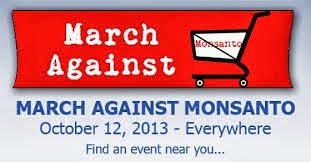 GMO Free Oregon says:
Is there anyone out there championing Syngenta's sugar beet seeds as something proudly grown in Oregon or being able fetch an economic premium from being a quality Oregon product?  No.  They are simply cheap commodity sugar beet seeds that could have been grown anywhere.  Flip the coin and there are plenty of people praising Oregon's organic and specialty beta vulgaris seed products, among many others.  These products fetch enough of an economic premium to make being a local family farmer a viable financial option for Oregonians. Syngenta's sugar beet seed plots directly put at risk all other neighboring organic and specialty seed growers cultivating other beets and chards, thus threatening the livelihood of many Oregon family farmers.  Local ordinances such as Jackson County's upcoming GMO ban aim to protect its citizens in this exact situation.
According to what I have read, this one local ordinance will be allowed to go to the ballot.

This Saturday all over the world there will be marches against Monsanto. Here in Eureka people will gather at 11 am at 2nd and I streets and march to the Humboldt County Court House where there will be speakers to discuss what people can do about the hijacking of their local food production and other GMO big business activities. For more information go to
March dash against dash Monsanto.com. Locally you can google or search facebook for march against Monsanto Eureka.