They're Gone, But I Still Have A Can Of Them From Thailand

“They’re All Gone”: Shock as sardines vanish off California — Fishermen didn’t find a single one all summer — Scientist: This is about the entire Pacific coast… Canada, Mexico, U.S. — NOAA: We don’t know why; The young aren’t surviving.

That's the headline at Energy News. 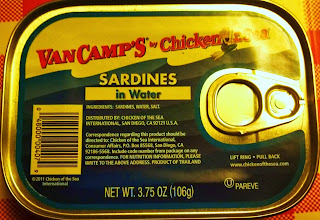 Have you seen a Pacific Sardine lately? I have noticed that I haven't seen as many sea gulls this last year as before. Sea gulls eat sardines or any easy prey.  I saw many at the dump/recycling center in McKinleyville this past weekend but they weren't in the numbers that they used to be. There were dozens of them at the Chevron in Trinidad in the old days. Throw down a french fry and they would go crazy.  Now other than an occasional stray gull, the crows and ravens have the place to them selves. Maybe it's just an off year for them but the lack of an entire species that is one of the main food staples of birds and other  marine mammals as well as larger fish is something to be concerned about. 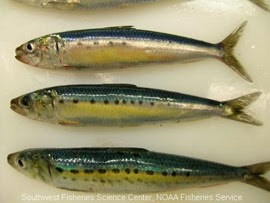 Evidently they hauled in about 4,400 tons and the quota for just the first 6 months of the Pacific Sardine  season was 23,000 tons.

The link to a story below speculates that colder ocean water is the cause. Could melting ice in the Arctic be contributing to the colder ocean currents?

From Fisherman's News:
While CWPA leaders say sardines are cautiously managed and natural explanations exist for declining stocks, environmental advocates like Oceana's Shester say that attitude is what led to the previous collapse of the sardine fishery, when fishermen were allowed to fish "until they couldn't find any more fish." They say the current situation, especially off the California coast, mirrors those times, when sardines disappeared and didn't return for almost 30 years.
This time, they add, recovery could take much longer.
See much more at Fisherman's News Dot Com.
Posted by Tom Sebourn at 11:18 PM