Here are the latest radiation reports for the Pacific Ocean.

As promised, I said I would share the numbers when they came in from those volunteers testing the Pacific Ocean for radiation related to Fukushima. I have mostly focused on air monitoring since that's the only monitoring the US Government is conducting. There are others though that have taken it upon themselves to find out what is going on in the ocean. 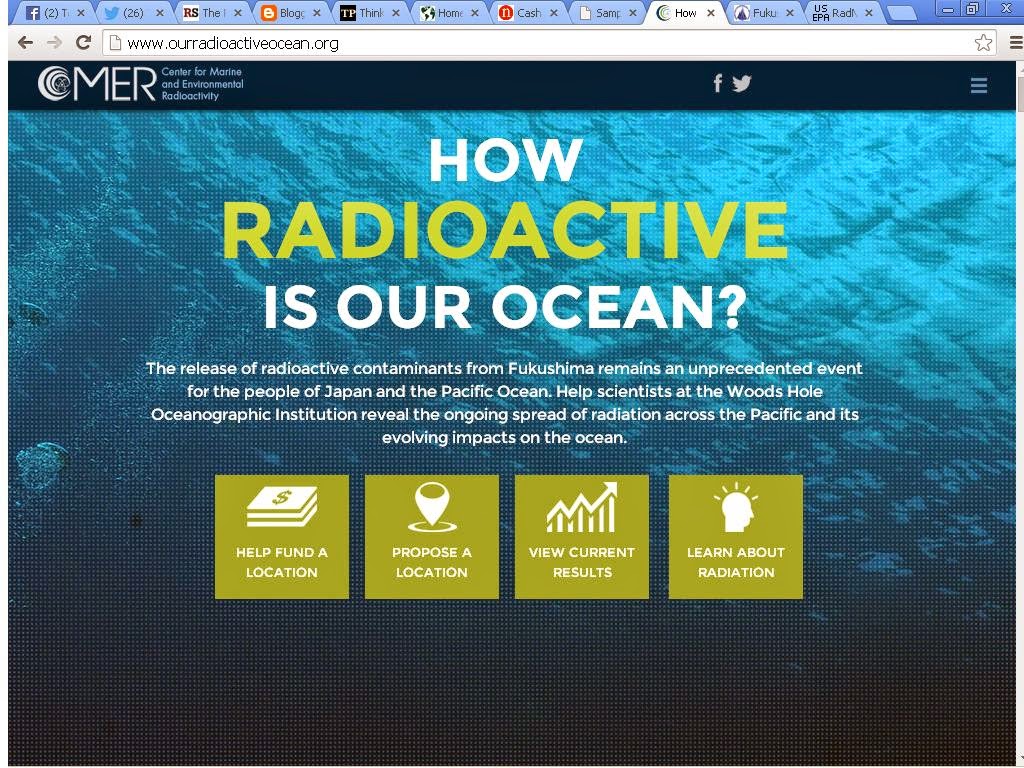 The folks at Kelpwatch Berkely are testing sea kelp at 44 locations in the Pacific Ocean for cesium.
Here are the latest findings.

At the same time, volunteers have been sending in their west coast samples of water to Woods Hole Oceanographic Institution. This is an all volunteer effort led by Ken Buesseler.
Here are their latest findings and numbers.

From what I can see, the ocean is doing a good job of dispersing the tones of radioactive water pouring over the melted core (or cores) in Fukushima and into the Pacific Ocean. Since our government doesn't see any need to test the waters for radiation, this volunteer effort is all we have to go by. Unless or until the Japanese are able to stop the unmitigated flow of radioactivity into our air and ocean, these numbers will continue to climb. According to projections, the radioactive water plume is just now starting to arrive along the west coast. Keep these links on hand to track and see how things are going as time unfolds.

For now, it looks like the ocean and it's spray are not as dangerous as some may have thought. I will be going out in my kayak this summer and will still eat local fish ( not salmon or long distance fish like Blue Fin Tuna) but rock fish from the local coastal waters. What you do is up to you as the government doesn't see any reason to test the fish or water for radiation. We do know that radiation shows up in the air because there are still some working EPA air monitors and as recently as April 30th, measured 146 Counts Per Minute of background Beta radiation here in Eureka before going off line for several hours. Normal background is about 7 to 10 CPM. Here is a link to the EPA site where you can plug in your town (if it still has a working monitor) and get the latest results for yourself.
Posted by Tom Sebourn at 10:10 AM