Late last year I discovered the EPA Radnet system of air monitors. There were originally more than 200 of these scattered around the country. As some of them break or are taken off line for other causes, there have become fewer. There are now about 40 stations scattered around the US. There is (was) a Query Interface that you can plug in the nearest city to you and check for different radiation readings. Beta radiation is one of the things that one can check for. This type of radiation is generally weak and not that destructive. It is measured by forcing air through a clean paper filter and then taking measurements. The numbers of the measurements are displayed in CPM or Counts Per Minute. Beta radiation is what we are breathing in and this accumulates, meaning it builds up in your body. Normal background beta radiation in Eureka is between 7 and about 30 CPM. I have seen measurements as high as 230 CPM for our area which is pretty high to be breathing continually. Most of the high readings are spikes and only exist for a few hours or days however.

As we get 3 and a half years closer to when the 3 melting reactors in Fukushima Japan find the ground water table there and China Syndrome, one would think that more monitoring would be going on. When those melting cores hit cold water they will shoot radioactive steam high into the atmosphere where it will easily find it's way around the northern hemisphere. In a normal winter weather pattern, that would mean it would hit the jet stream and end up somewhere over the west coast between Canada and San Francisco. That's where the winter storms used to make landfall. Lucky for us, the jet stream doesn't head our way much anymore because since the accident destroyed the plants, we have been in a drought. This doesn't mean that we aren't getting hit with some radiation though. I have two charts below from the Radnet System. One is from Fresno California and the other is from Corvallis Oregon.

The area of Japan where the 3 melting reactors was hit by two massive typhoons in the last month. Water has poured into the open destroyed buildings and fallen onto the hot fuel releasing steam. 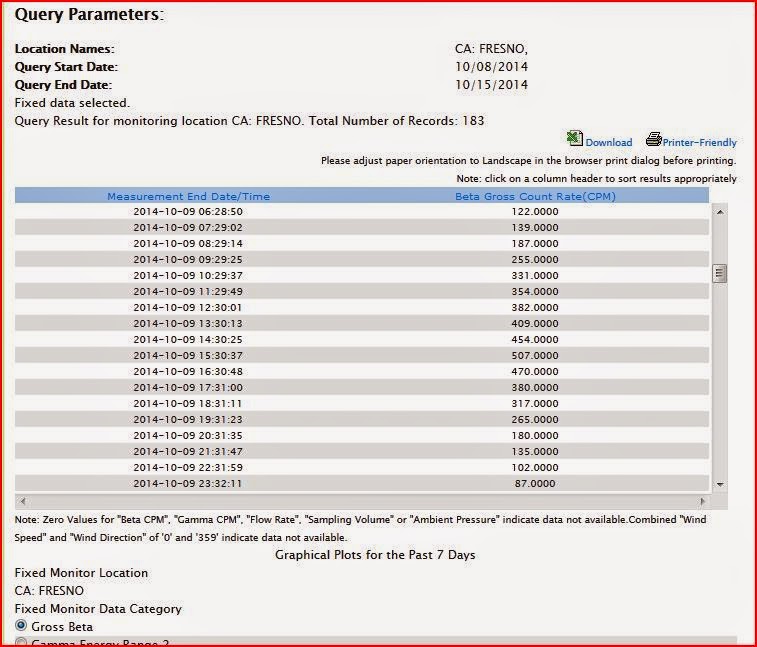 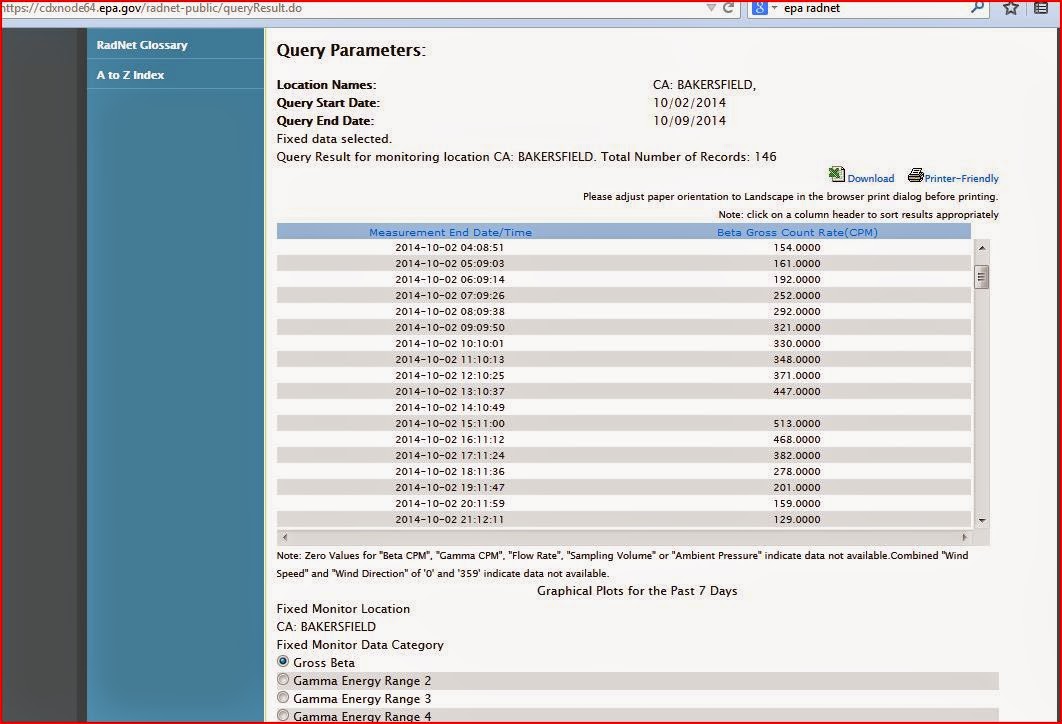 As I have been writing this I kept saving it for updates and have been avoiding it's release because I was waiting to hear back from the EPA. Here's why.


On August 6th. the Eureka Radnet monitor was shut down. There are no longer any public air radiation monitors along the west coast between Alaska and San Diego Ca. The official story from the EPA to me as to why the Eureka site was shut down as "Too much Radio Frequency interference".

I asked two follow up questions: "Are the rest of the west coast monitors turned off for the same reason?" and "What are or do you know what those offending radio frequencies are?" I have not received any response to the last two questions from the EPA. For this reason I have written our Congressman Jared Huffman.


The following information has been submitted:
Name: Mr. Thomas R. Sebourn
Address: ###############
City/State/Zip: Trinidad, CA 95570
E-mail: ##############
Telephone: 707-##########
Issue: ENV
Message Subject: EPA Radiation Monitoring Turned Off
Message Text:
Mr. Huffman, I am concerned about the EPA turning off the last coastal beta radiation monitoring site between Anchorage Alaska and San Diego California. Eureka was the last one working but was turned off due to "Radio Interference." The EPA Radnet sites are the only way the public could see the amount of radiation in the air. The current Typhoon dumping water into two of the 3 melted down reactors in Fukushima will produce steam that will make more radiation airborne. Too bad we aren't able to know if we even need to take cover. This is a travesty and a disservice to the public. One can only assume that things are so bad that we aren't being allowed to know what is happening to our DNA and the future of the planet.

The beta monitors were turned of one by one until San Diego and Anchorage were the last ones on. I took the above screen shots of inland readings for Bakersfield and Fresno on the 15th of October 2014. That is yesterday as I write this and they were still working inland. From what i have been seeing, It looks like a trend up in CPM for the unforeseeable future, or maybe I have just been looking at too many charts. I guess I won't have that problem anymore since the charts are now dark.

I was sent the following link this morning there is some more information there. Don't look to the main stream media for much on this story though because they already have Ebola and advertisers don't like this story very much. Besides, they looked into it a few months ago and things were fine on that day.
http://www.allnewspipeline.com/Something_Bad_Is_Happening_CA.php

It comes with an interesting conversion chart for reading radiation levels. 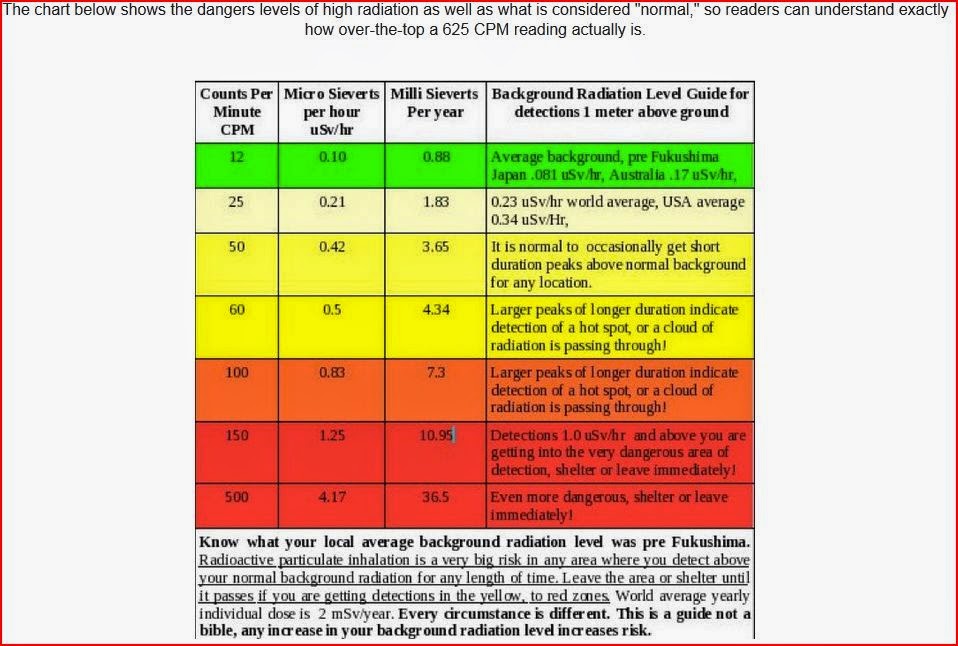 While most of us are distracted by Ebola, NFL or Baseball playoffs, this seems to be moving up to levels where it should make people sick. It's going to rain again. That changes everything.