The folks over at Measure R Vote NO facebook page seem to be intentionally misleading the public about what and how the measure will affect the workers of Eureka if it passes.

Measure R is an attempt to raise the minimum wage in Eureka to 12 dollars an hour. The measure would not affect every business. Only businesses with more than 15 employees within the  city limits would required to pay the $12.00 minimum wage if it passes.

They have argued that Measure R raises the wage too much, too fast. It's true that when it was originally conceived, the California minimum wage was at a stagnant $8.00 an hour with no plans for our Republican Governor to sign off on any wage increase. It had only gone up $2.25 an hour in an entire decade. That decade turned into 16 years until we got a Democratic Governor willing to sign off on an increase and it went to $9.00 per hour about 4 months ago. In another 14 months it will go up to $10.00.

The folks at Measure R Vote NO facebook are saying that this increase is taking 3 years to complete which they say is reasonable by their timeline, as if July 1st. 2014 to January 1st. 2016 is 3 years time. They have their facts wrong and not just their facts but their math. A year and a half is not 3 years. Based on this one big lie, and all of the other inconsistent so called facts that the No on R folks seem to be basing their arguments on I say don't believe a word from these people.

Don't let these people that can't even do math allow you to be afraid of raising wages at the bottom instead of the top. 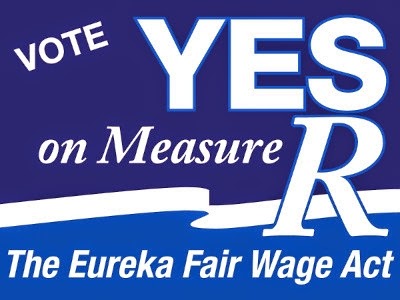 I have copied and pasted Shane Brinton's comments that point out some other falsehoods on the Measure R Vote NO page here:

Shane Brinton It is intellectually dishonest of the No on R campaign to use the plight of caregivers as an argument for keeping the minimum wage down. It is important to understand that state law designates the IHSS Public Authority (Board of Supervisors) as the body responsible for setting IHSS pay in Humboldt County. Attempting to shift responsibility to the Fair Wage Folks is a cynical ploy to mislead working class voters.The Measure R proponents did not exclude caregivers anywhere in the measure. Their intent is for it to cover all large employers. If Measure R passes, I truly hope the Board of Supervisors will honor the intent of the measure. In any case, Measure R will create upward wage pressure, which will ultimately help IHSS workers and other low wage workers throughout the region. As the old saying goes, a rising tide lifts all boats.Lastly, please note that the California United Homecare Workers (CUHW), which represents all IHSS workers in Humboldt County, has endorsed Measure R. The decision was discussed by IHSS workers at a local membership meeting. There was unanimous agreement among those present. Full disclosure: I am an employee of CUHW, which means I actually work for and interact with IHSS workers on a regular basis.

So if you want to get some straight information about Measure R in Eureka, see Yes on Measure R folks here.http://eurekafairwageact.wordpress.com/
Posted by Tom Sebourn at 1:58 PM