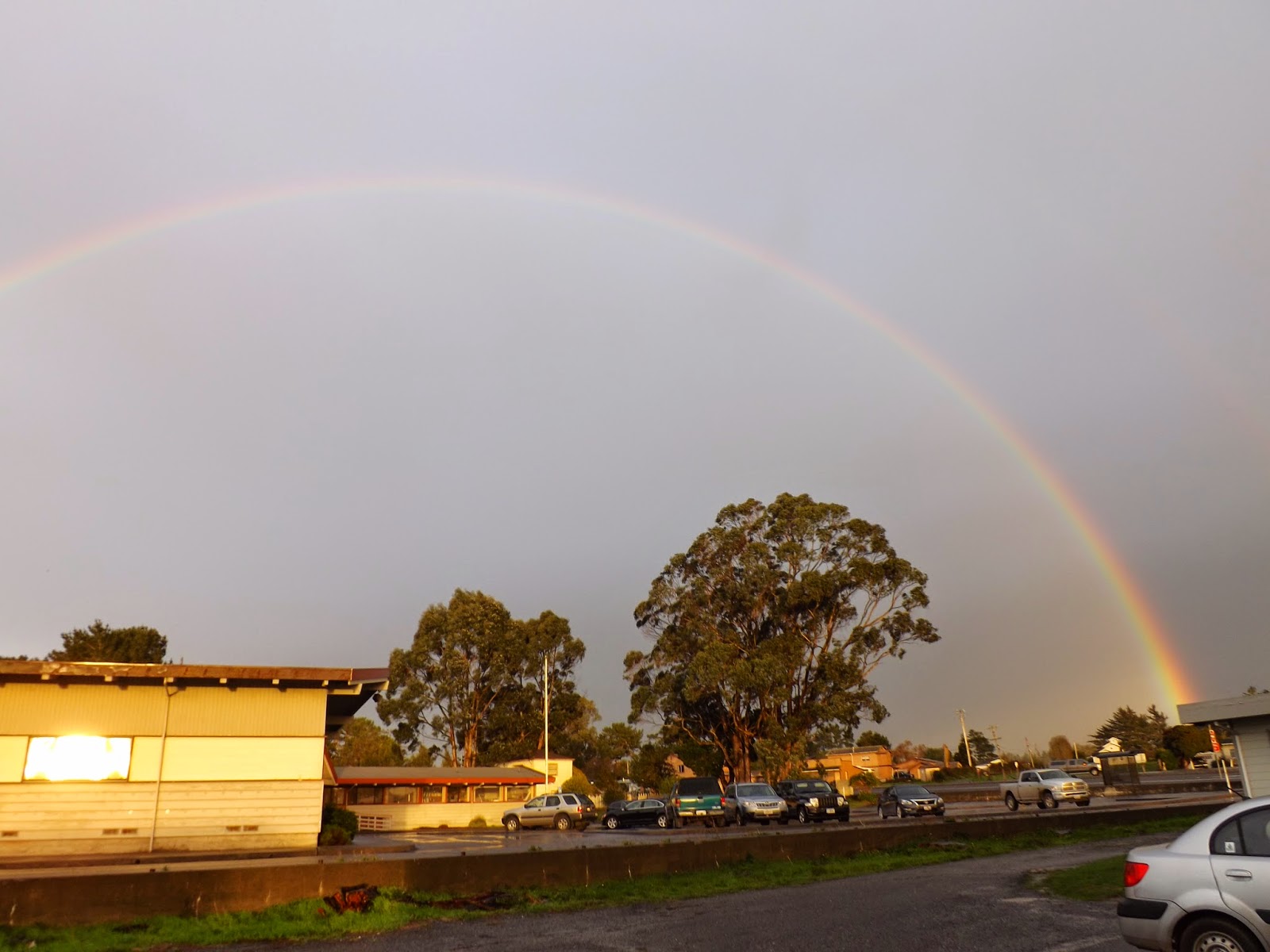 There were rainbows everywhere. This one shown above was a full bow and later on it had a double rainbow. 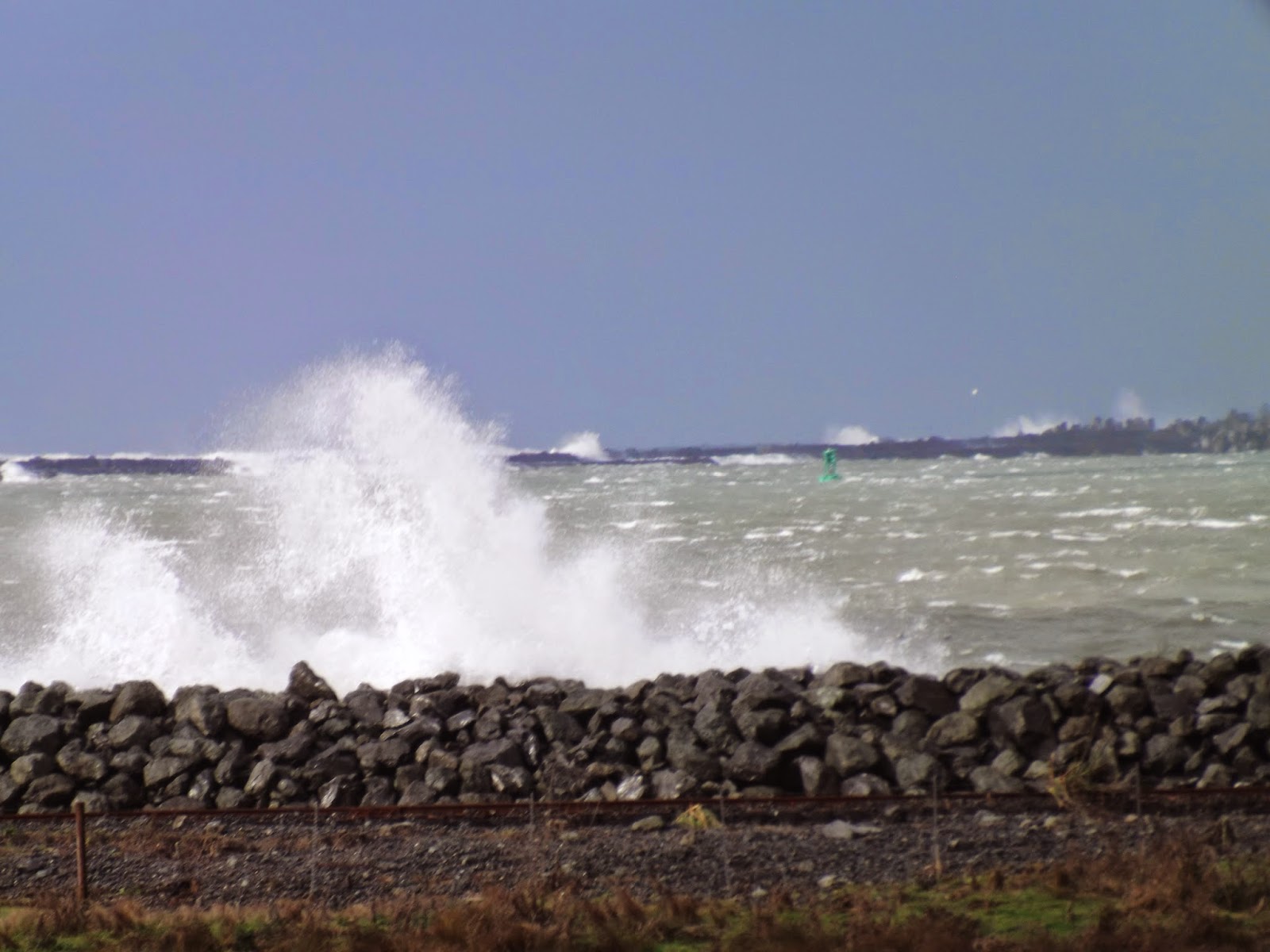 All of these pictures were taken on or about 12-23 and 24-2014 from the parking lot at the radio stations I work for which are just across US 101 from Humboldt Bay. The bay was furious at times. You could see the waves topping over the north and south spits, I had never seen wave spray above the trees at the North Spit before but that's what was happening. Forget the South Spit of Humboldt Bay. Waves crashed right over the entire thing into the bay for a couple of days. 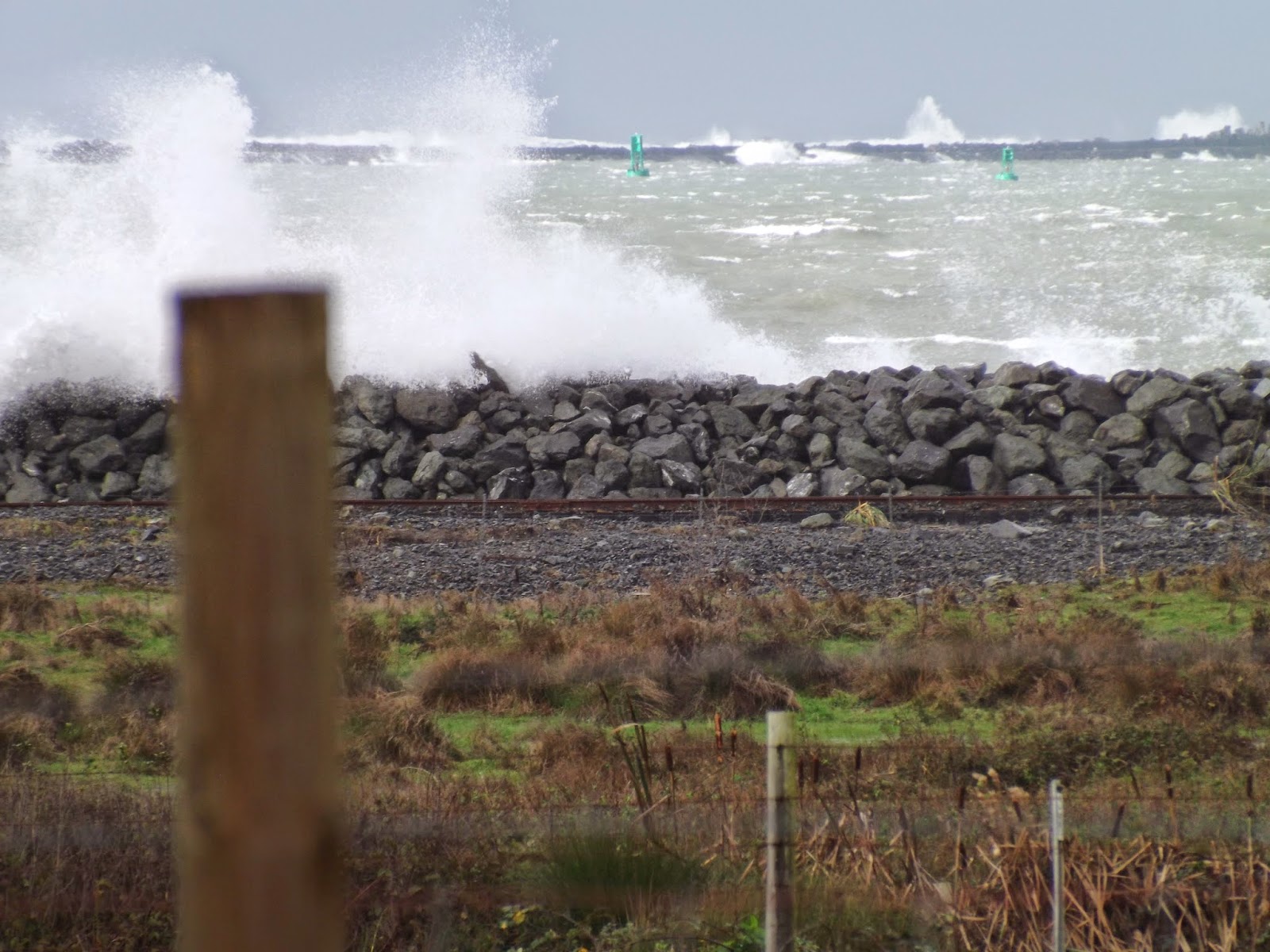 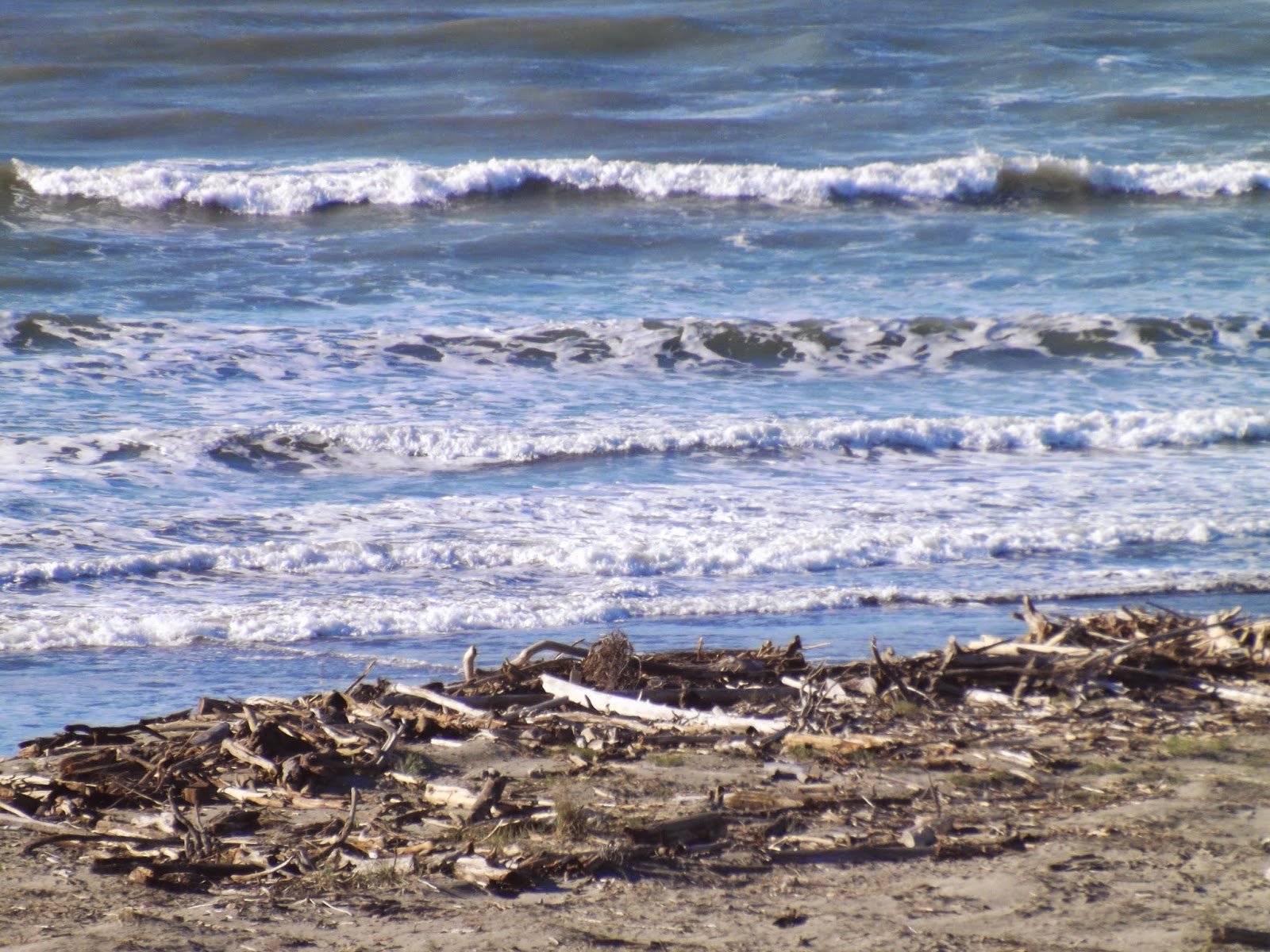 Driftwood piled up on some local beaches. We hadn't seen many storms since March of 2011 so there was a lot of wood just waiting to be deposited and it was. Above is a sample of what currently sits on Clam Beach near McKinleyville California. 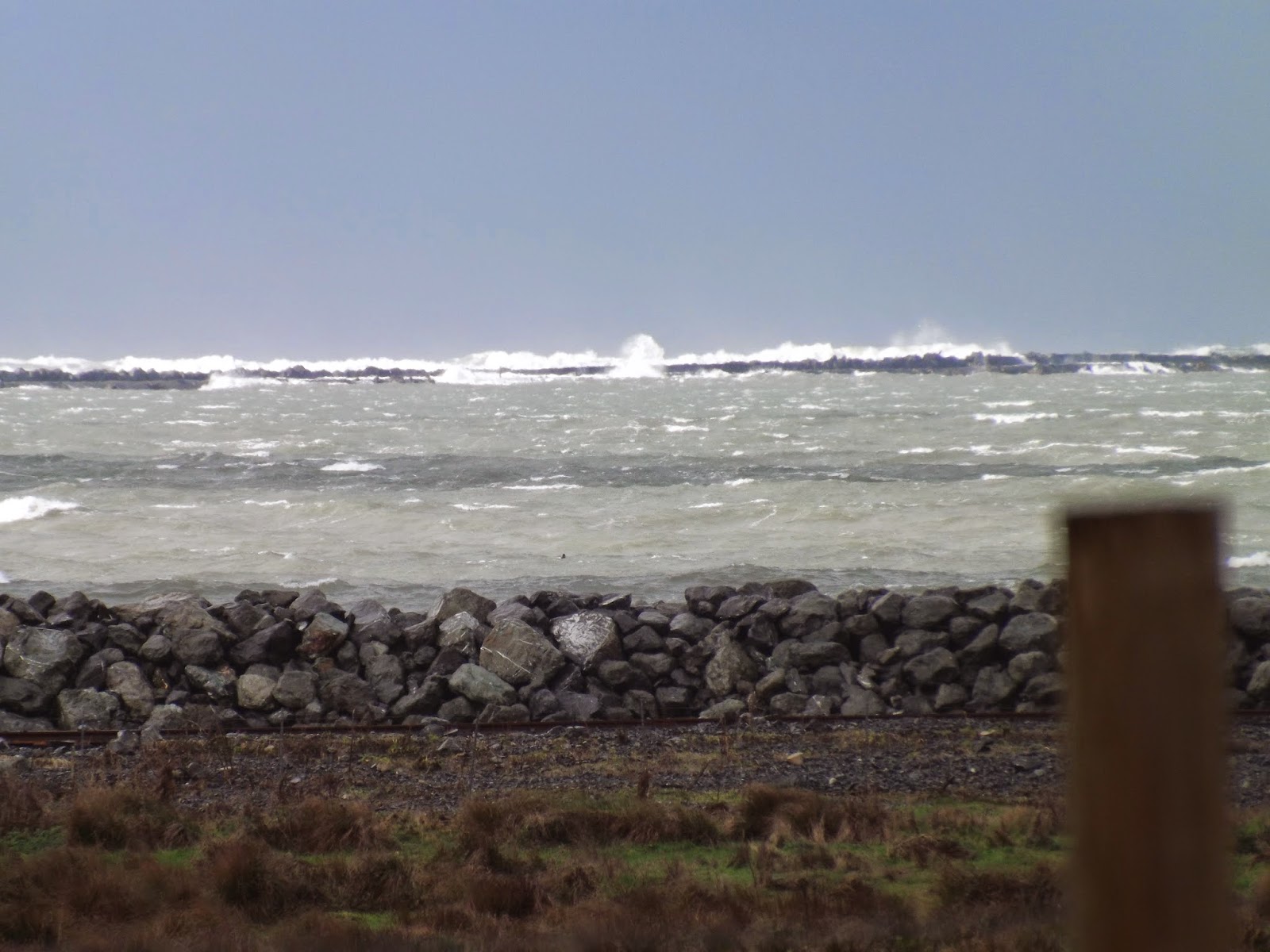 The straight line at the bottom of the rock levy is the rail line where the rail road used to go. The tracks are still there but the trains have stopped running
.
Of course there was a lot of coastal flooding due to astronomical high tides and lots of rain. Other bloggers in Humboldt had that story and lots of fine pictures to go with it too.
Posted by Tom Sebourn at 3:32 PM No comments:

A Tree Falls In McKinleyville

On a mostly sunny day with little or no wind, a large tree decided to give up reaching for the sky and instead laid down in the #2 lane of North US 101 just North of School Road. This was the scene at about 2:40 pm Sunday. 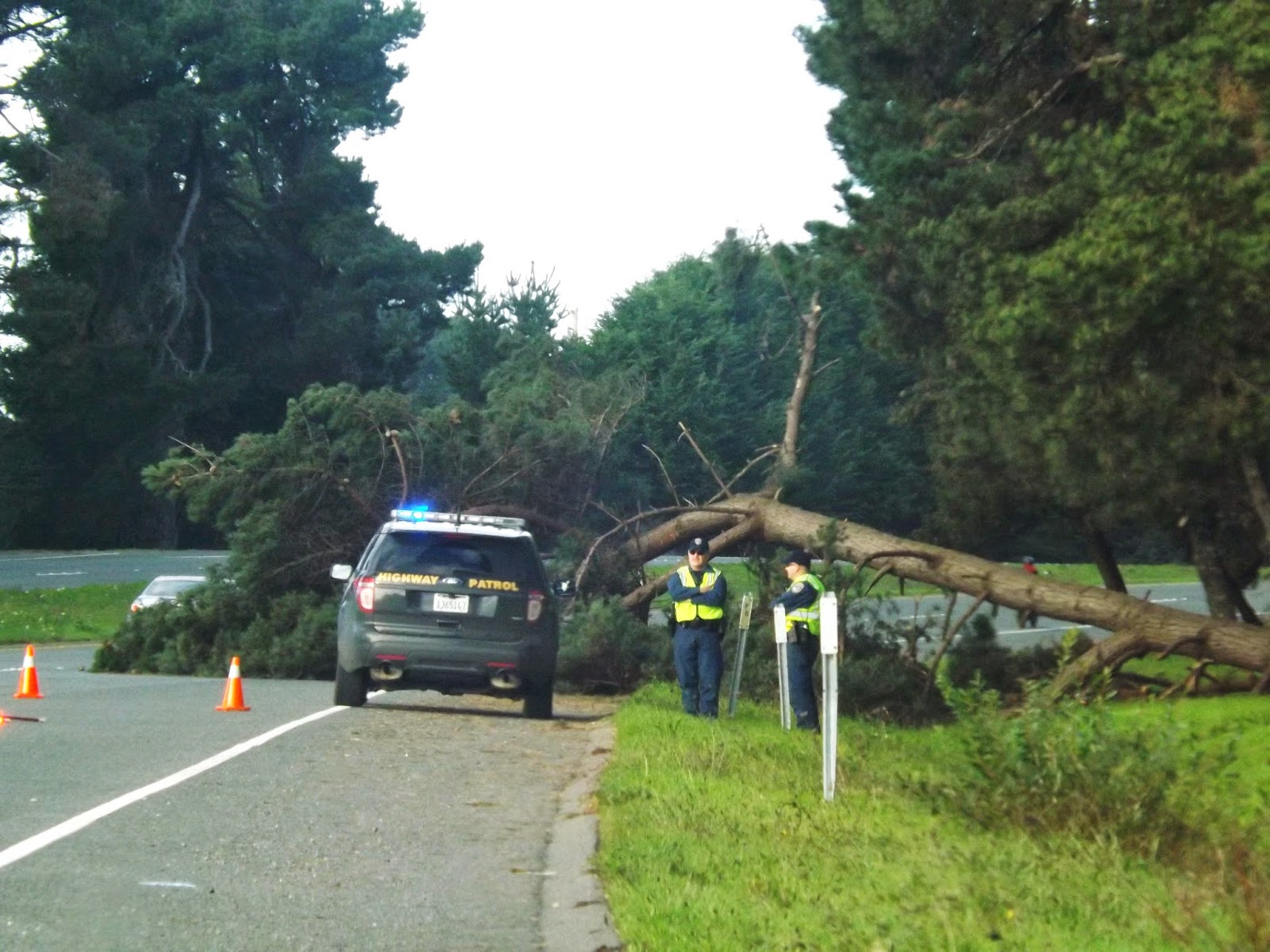 Traffic is moving around the tired tree. We have had a lot of rain lately so the ground is pretty saturated and little wind is needed when a tree is a bit lopsided or just gets tired of being a tree and would rather be fire wood.
Posted by Tom Sebourn at 3:02 PM No comments:

Labels: Lots of rain in Humboldt 2014, US 101 McKinleyville Tree Down

The City of Trinidad is getting ready for a celebration of sorts. We always worry these days about a Tsunami from an earthquake doing serious damage but consider the story from the light house keeper which is archived at the Bureau of Land Management site. You might gain a new respect for the largest ocean on the planet.

"The storm commenced on December 28, 1914, blowing a gale that night. The gale continued for a whole week and was accompanied by a very heavy sea from the southwest.  On the 30th and 31st, the sea increased and at 3 p.m. on the 31st seemed to have reached its height, when it washed a number of times over (93-foot-high) Pilot Rock, a half mile south of the head. At 4:40 p.m., I was in the tower and had just set the lens in operation and turned to wipe the lantern room windows when ... Batten Down The Hatches?

The forecast seems to be holding. We appear to be in for a serious wind and rain event. It all starts Wednesday! So batten down the hatches if you have hatches. If not, you might, as I do,  wonder if perhaps you should have invested in hatches.

Seriously, if you are in a low lying area, wind prone area or can't be without electricity, internet and TV, do what you must to survive this. Earthquake kit should have most of what you need. Trow in a chain saw and generator, you get the idea. Better to be ready than without. 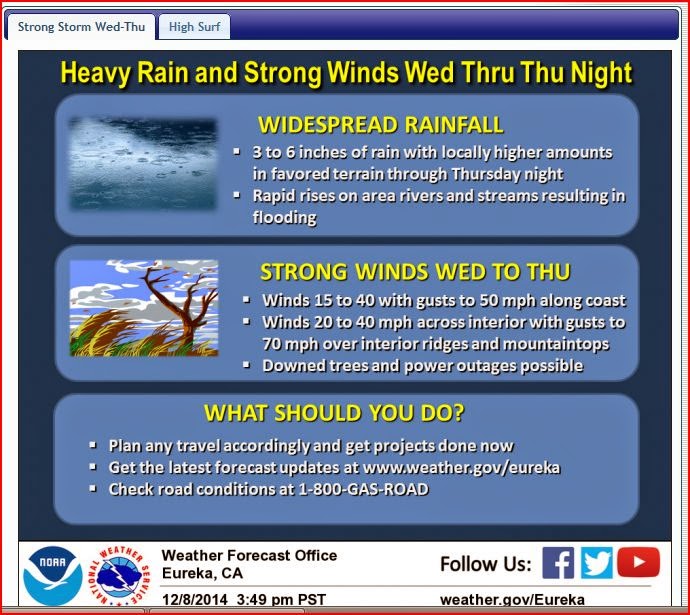