Can Your Car Be Hacked? Mine Is Too Stupid For That.

An interesting 60 minutes episode explores what it would take to hack into an automobile's on board computer. Evidently, it only takes a determined hacker with a laptop. Of course you also need a smart car. Most cars now, if not all are equipped with smart on board computers that control everything from the air fuel mixture burn for the engine to safer braking systems, back up monitors that let you know if something is in your way  and even climate control for passengers.

In Eureka, there is a used car dealer that actually uses technology to make sure they get paid. If a person is late on their payment the car will be remotely disabled until a payment is received. This is done after the car has been turned off so as to avoid safety problems. While this sucks for those late on their payments, it's great for the auto dealer. One could say that this is a good use of technology.

When I bought my Kia back in 2007 I picked out a stripped entry level Rio which is the cheapest Kia available. I knew that I would drive the wheels off of it as my daily round trip commute is about 60 miles.
I didn't want to kill a real nice car in this way so I went cheap.
Mine is a stick shift with hand crank roll down windows and no auto door locks. If I drive into a canal or lake, I can just roll down the window and swim out, assuming that I and the car are otherwise OK other than being in the water. I don't like cars that lock the doors automatically. I don't like cars that think they can automatically brake or steer better than myself. I don't have On-Star or even a GPS tracking device. I believe the 2007 Rio  was just about the only car that year that still didn't come with built in GPS. So with that said, I am not too worried about someone hacking into my on board computer to find out where I am, have been or to disable safety equipment or something. My computer is devoted to running the car and must be accessed by actually plugging into it.

Just like the Samsung Smart TV's that have built in cameras and microphones, new cars have lots of great technology that can make driving safer, easier and even more fun. However, with all technology, there is a down side. People sitting in front of the Samsung TV's were unaware that hackers could access the built in camera and microphone and the same goes for people with modern cars. The smarter they are it seems, the more systems are available for hacking.

Read the story and make up your own mind. For the most part these modern cars are better and safer but there is always that chance that they are not entirely under your contol.
Posted by Tom Sebourn at 1:46 PM 6 comments:

Friends of the Earth petition says NRC illegally let PG&E alter nuclear plant’s license
WASHINGTON - The U.S. Court of Appeals for the District of Columbia Circuit will hear, over the objection of Pacific Gas and Electric and the Nuclear Regulatory Commission, a case brought by Friends of the Earth alleging that the NRC illegally allowed PG&E to alter the Diablo Canyon nuclear plant’s license.
Friends of the Earth contends the NRC acted in secret, and in collusion with PG&E to hide Diablo Canyon’s vulnerability to earthquakes stronger than it was built to withstand. A decision in favor of Friends of the Earth could result in PG&E being forced to shut down the reactors, pending a public hearing to examine new earthquake risks at the plant.
The D.C. Circuit ruled late February 20 not to grant a motion by the NRC and PG&E to dismiss the case on procedural grounds. The judges instructed that the case should be heard on its merits.


“This is a big victory,” said Damon Moglen, senior strategic advisor for Friends of the Earth. “The public has a right to know what the NRC and PG&E won’t admit -- hundreds of thousands of people are put at immediate risk by earthquake danger at Diablo Canyon. The evidence will show that the NRC and PG&E colluded to illegally change the terms of Diablo Canyon’s operating license, to cover up the fact that it cannot withstand a rupture of the larger, more powerful earthquake faults that have been discovered since the reactors were designed. This means the plant violates its operating license and must be shut down.”
Under federal law and NRC regulations, changing the way seismic risk or reactor durability is assessed at a nuclear plant requires a license amendment and attendant public adjudicatory hearing. Instead, in consultation with PG&E in 2013, the NRC inserted a secret revision to Diablo Canyon’s license, changing the scientific calculations for assessing earthquake risks and retroactively declaring the plant’s two reactors strong enough to withstand far more shaking than they were built to endure.
The secret revision of Diablo Canyon’s license was revealed in NRC documents made public in September 2014, when the agency rejected a dissenting appeal by the NRC’s own former senior resident inspector. The inspector, Dr. Michael Peck, concluded that Diablo Canyon was operating in violation of its license and should be shut down unless and until new seismic information was addressed.


“PG&E’s recent study revealed that the earthquake threat at Diablo Canyon, as measured by its original license, could be far greater than that for which the reactors were designed. So PG&E and the NRC secretly amended the license to relax the safety requirements,” said David Freeman, former head of the Tennessee Valley Authority, Los Angeles Department of Water and Power and the Sacramento Municipal Utility District and a special advisor to Friends of the Earth.
“This is not only illegal, it shows that PG&E has not really learned the lesson of San Bruno: that safety, not profits, must be its top priority,” said Freeman. “The risk of getting this wrong is the California version of Fukushima.”
Briefing at the U.S. Court of Appeals for the District of Columbia Circuit will likely be completed in the next few months and a ruling is expected later this year.

###
Friends of the Earth is the U.S. voice of the world's largest grassroots environmental network, with member groups in 77 countries. Since 1969, Friends of the Earth has fought to create a more healthy, just world.
Posted by Tom Sebourn at 3:18 PM No comments:

Below are transcripts from 2 days ago of an ABC News Australia report which you can find HERE.

ABC News (Australia), Feb 18, 2015 (emphasis added): Inside Fukushima: ABC tours crippled power plant… TEPCO [says] major steps have been taken to decommission the molten reactors. Others say the plant cannot be fixed… With vacuum-sealed protection gear and special breathing apparatus, TEPCO gave the ABC an exclusive tour of the crippled plant… Reactors 1, 2 and 3 were strictly off limits, and looking from about 500 metres away the area was clearly deserted, with cars and equipment abandoned. Removing the molten fuel from these reactors will be an enormous challenge… [TEPCO guide Kenichiro Matsui] admitted they did not know the extent of the problems… Locals distrust TEPCO, say future is ‘hopeless’… Fourth-generation fisherman Hisashi Yoshida said any trust with TEPCO was broken a long time ago… Shinichi Kumadah, a Fukushima evacuee [told ABC] “When I think of the future I can’t think of anything. It’s hopeless.”

BC News (Australia) transcript, Feb 18, 2015:
I really wish we would stop pretending that the nuclear plants all over the world are somehow safe. The recent push by the nuclear industry to build more plants and re-issue licenses to existing plants to continue operation is irresponsible at the very least and in my opinion derelict.

Here is just another disappointing story about the work being done and yet another leak.

Posted by Tom Sebourn at 3:58 PM No comments:

Americans Against Net Neutrality. Why?

There is an ignorant segment of the US public that thinks that private corporations should control what we see, hear and do on the internet. They have mounted a campaign to allow a few giant mega main stream media giants to own and regulate the internet in the US to the benefit of a few giant corporations or those with the most money.

Imagine if our roads were all controlled by private corporations? How would that work out with toll booths on every corner? If you support a free and open internet where everyone is treated equal, let congress know that you support "Net Neutrality".

The link below is from one of the groups trying to take over the internet for Verizon, Comcast and Time-Warner and charge competitors much more per mega byte so that they can keep their monopolies. Educate yourselves about this subject and let elitists like these folks know that you support public internet and a free and open internet not controlled by main stream media giants and Wall St.

On the other hand, if you prefer to have slower internet for you and faster internet for some select corporations, by all means, support the fascists that want to control what should be a public utility.

Say 'NO!' to the FCC Internet Takeover

On February 4, Federal Communications Commission Chairman Tom Wheeler proposed that the federal government reclassify the Internet from an ‘information service’ to a ‘telecommunications service’ in the name of keeping it 'fair' -- a plan that came straight from Barack Obama's desk. Of course, this is nothing more than a pass for Big Government to expand its regulatory power at the expense of digital freedom.
Like all innovation, the Internet wasn’t created by government… and government certainly has no power to control it. Nowhere in the Constitution is there a provision providing the federal government with power to regulate the free-flow of information. In fact, such an idea flies in the face of the First Amendment.

ConstitutionAlly is calling every American to sign our petition and message the FCC, prior to their February 26 vote on Obama's plan. Take Action: Say ‘NO!’ to the OBAMA-FCC Internet takeover.
Add your name below and send your message to the FCC now!
Posted by Tom Sebourn at 1:23 PM No comments:

There Is A Chance For Water Spouts Today

According to the National Weather Service in Eureka, there is a chance for water spouts today due to thunderstorm activity over the ocean. This is something to be concerned with it you plan on being out there in a boat but I don't know of anyone that would go our into the Pacific Ocean near Eureka today. It looks like a chocolaty blender and not something you would want to navigate. The water spouts if they materialize should stay over the water but one never knows.

Here is what they sent out:

A Break In The Weather For A New Eureka Festival

There was a new festival today in Old Town Eureka California. The Crab Crawl Festival featured music, a crab race, a slower crab walk and tasty crab eats. Happy hours were extended all over town for the Friday and Saturday event.

The weather was windy but otherwise mostly nice considering what was and what is still ahead. 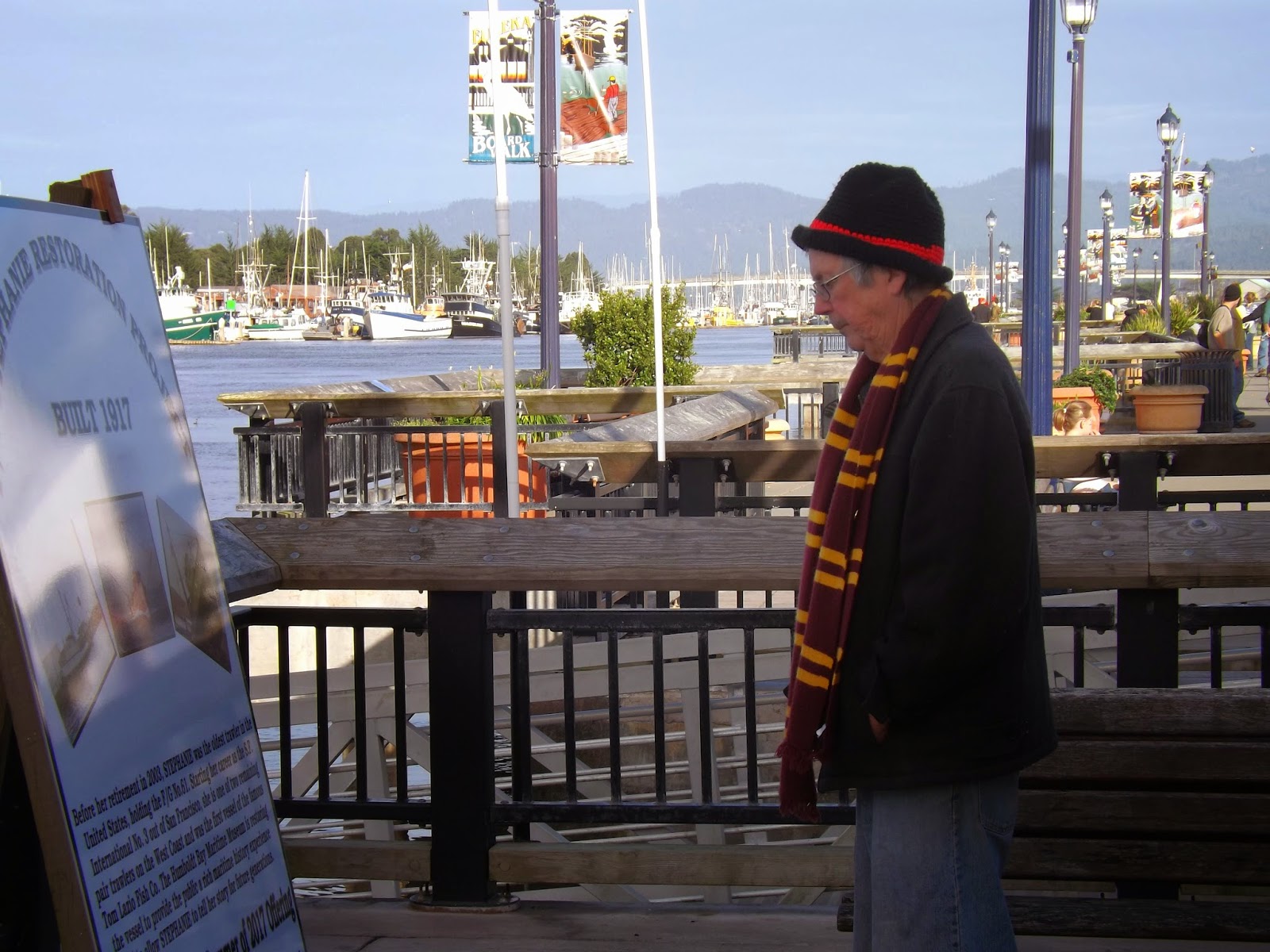 Dad and I got there late but the wine tasting was still going on, as well as the live music and what looked like a real beer garden. 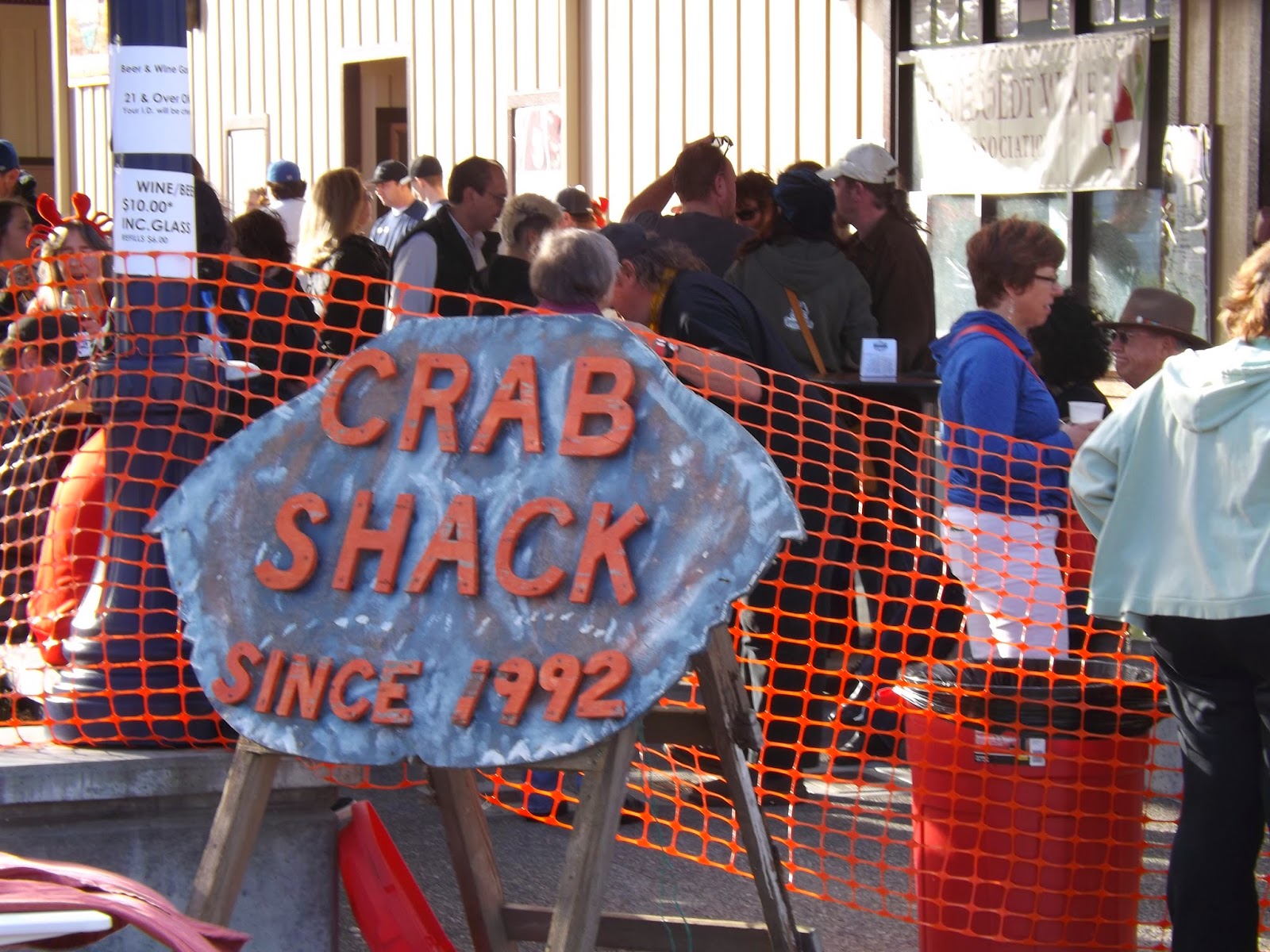 There were several inside vendors and some that braved the edge of the water outside. 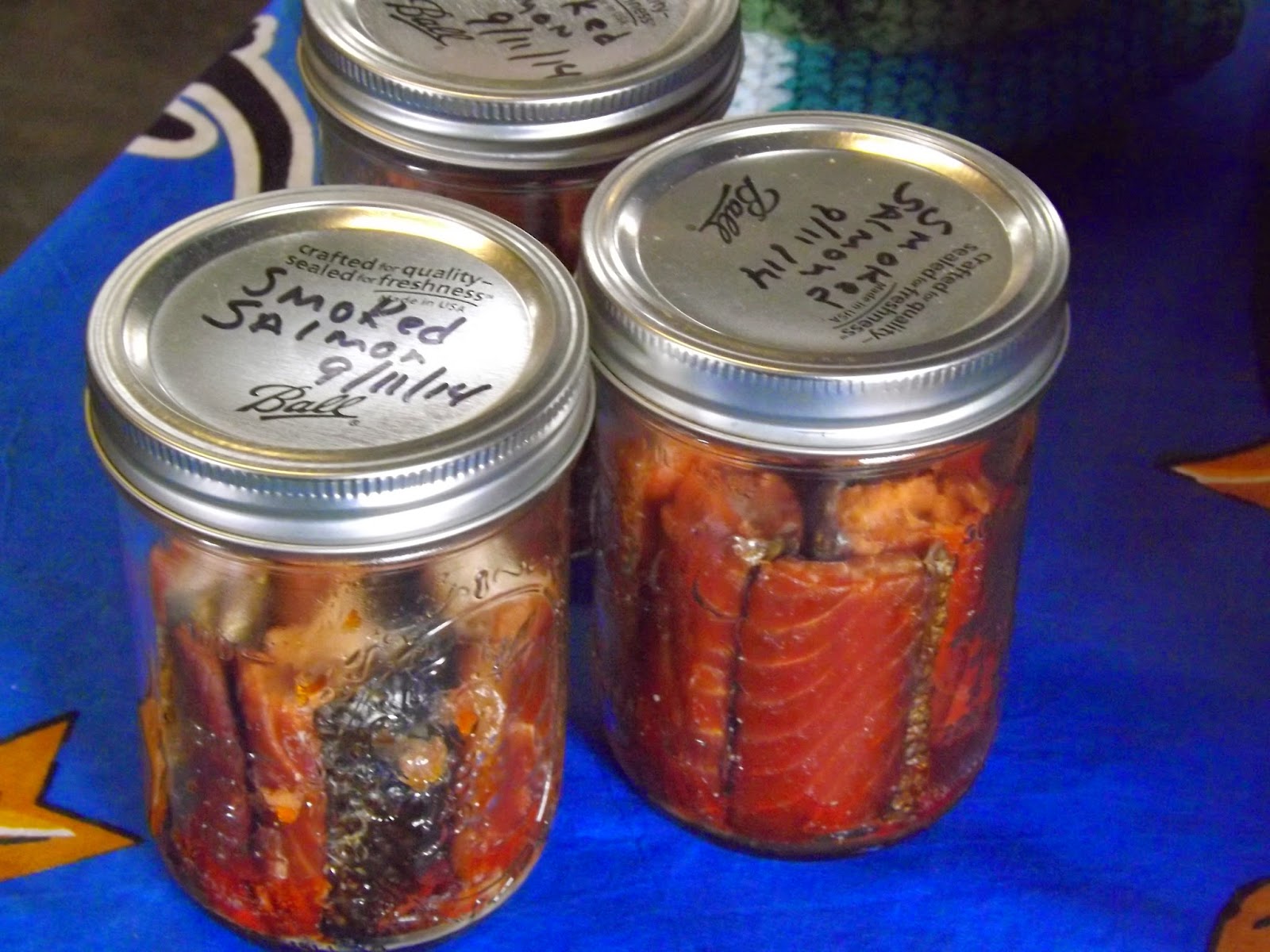 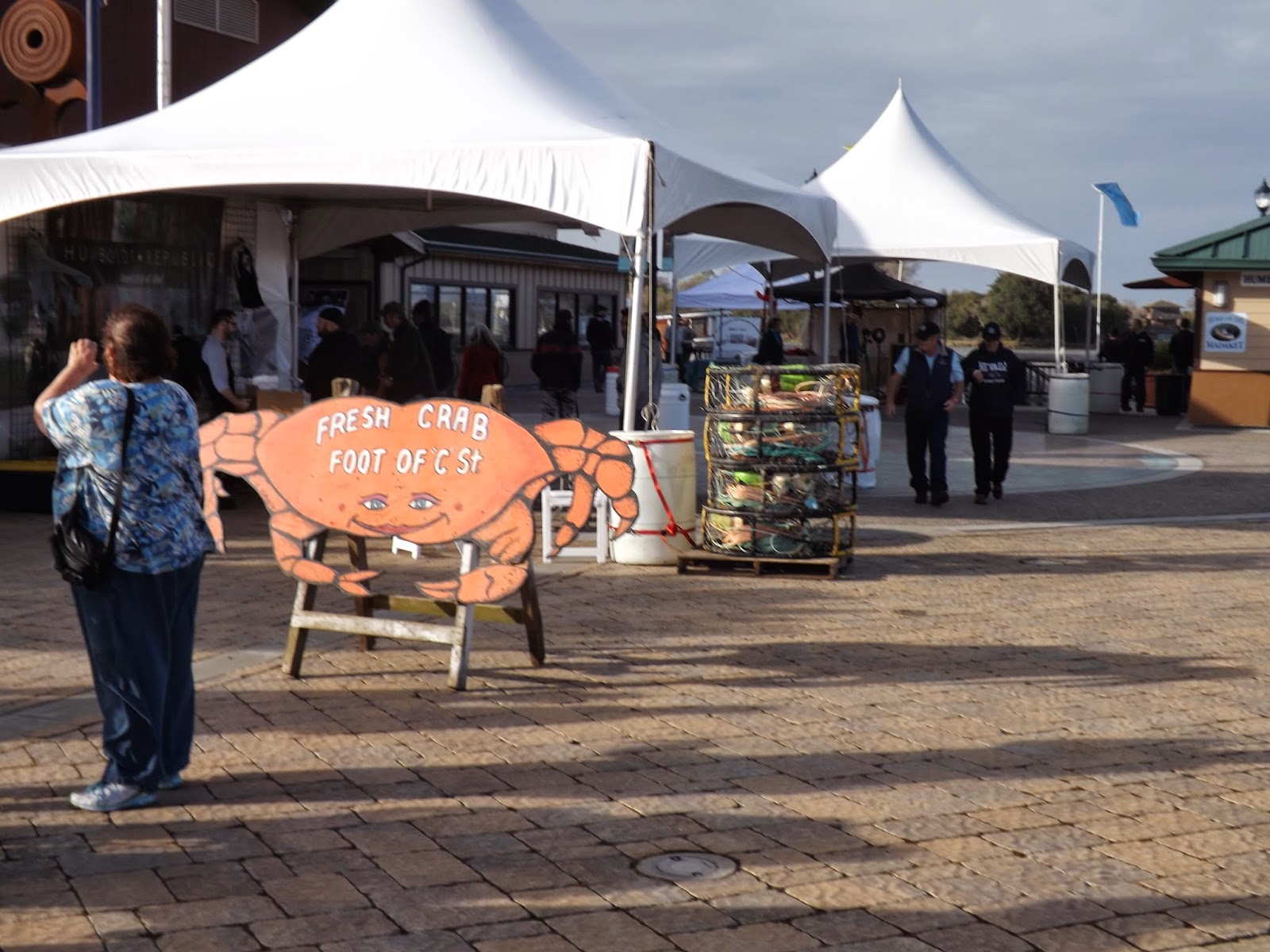 I might have to get out early to this next year. Some locally smoked and canned salmon. 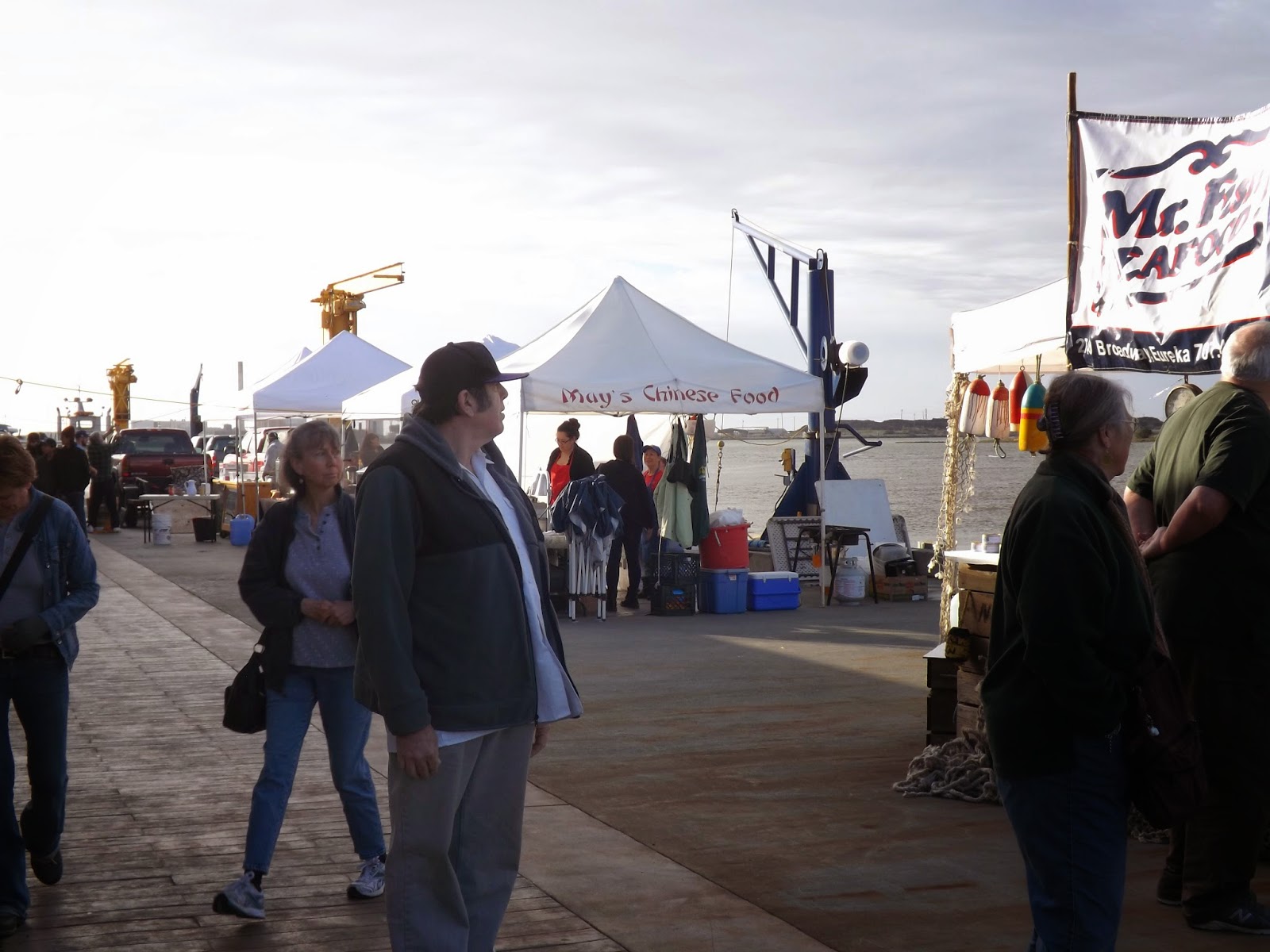 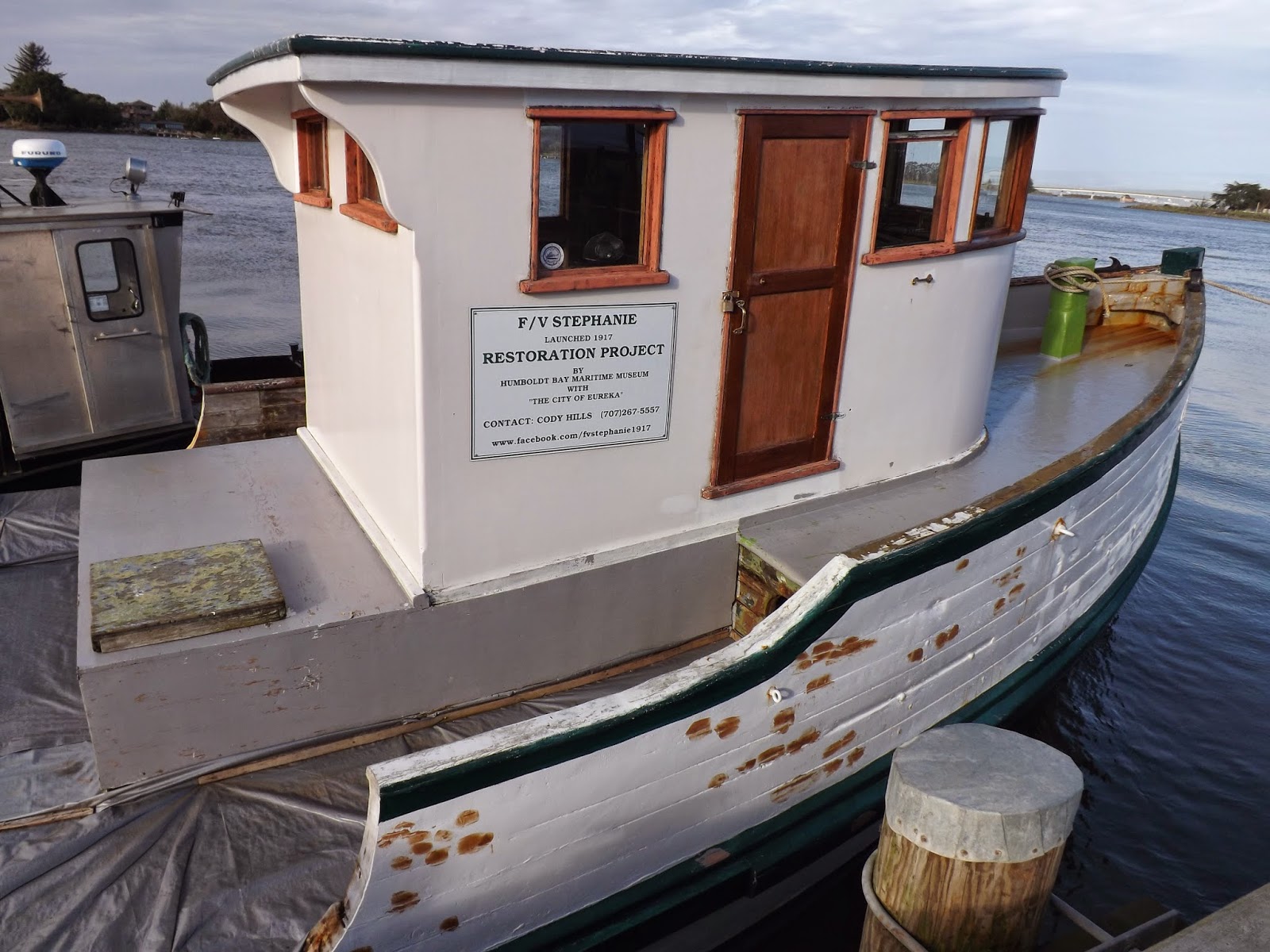