While The Drought Continues, Trinidad Prepares For Heavy Rain

While the rest of the state is still in the middle of a serious drought, the north western tip of the state is still getting rain. Not as much as we used to, but things are green and the creeks and wells have water in them. I am thankful for the water that comes and keeps corner of the woods green. 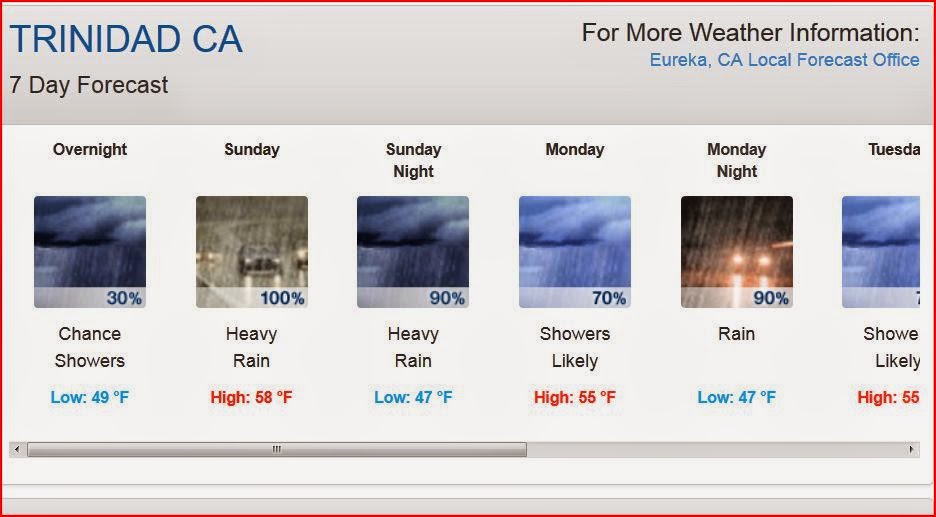 We had good rain on Friday night a fantastic Saturday to get stuff done. tomorrow looks like an indoor day tomorrow.

Here is a link to the National Weather Service for the latest.
Posted by Tom Sebourn at 11:15 PM 5 comments:

McKinleyville, CA – McKinleyville Community Services District will hold a Public Scoping Meeting on Tuesday, March 24, 2015 at Azalea Hall beginning at 6:00pm, regarding the planned Wastewater Management Facility (WWMF) and rate adjustments to facilitate financing.
The upgrade of the WWMF will allow the District to provide wastewater service for the next 20 years. The cost of the planned Wastewater Management Facility is $17 million. As a result of the District’s efforts with the California State Water Resource Control Board, a low interest loan has been secured to fund the facility. The loan is expected to have a fixed interest rate of only 2 percent. This interest rate is historically low, and the District is unlikely to secure borrowing at a rate lower than this.

In 2012, a financial plan was completed, utilizing the best information available at that time, in order to develop updated wastewater rates. It was anticipated then, that there would likely need to be an additional rate increase as the WWMF planning continued. This year, an updated financial study of the wastewater enterprise’s financial position was undertaken, based upon updated information, specifically more complete engineering cost estimates for the facility itself, as well as refined estimates of new operating costs.

This study was completed in order to ensure that the wastewater system will be able to responsibly support the loan, as well as the increased operating costs associated with the upgraded WWMF. The District retained an independent consultant to review the wastewater financials and rates. The consultant prepared a long-term financial plan that includes a series
of wastewater rate adjustments necessary to support the new facilities costs. While the District will need to raise rates to support its infrastructure needs, a comparison to surrounding communities’ rates revealed that McKinleyville will still have competitive wastewater rates, lower than many of the surrounding districts, even while proactively addressing a major infrastructure need.

In 2009, MCSD undertook a Wastewater Facilities Feasibility Study which ultimately identified the need for a Wastewater Management Facility Upgrade, in order to continue providing wastewater treatment service to customers, while remaining in compliance with the NPDES permit requirements.

Throughout the progression of the Feasibility Study, District Staff worked internally, with consulting engineers, and with the public to evaluate multiple alternatives, which resulted in the development of a list of four alternatives for further in-depth study. The 20 year Draft Facility Plan was presented for public comment in October 2011, and the updated Plan was presented to the Board in November 2011. In addition, the District conducted a public workshop to discuss options for funding the WWMF, and as a result has been working with the California State Water Resource Control Board to secure a low interest loan for the project.

The American Water Works Association, in their 2014 State of the Industry Report, concluded that the “State of Water and Sewer Infrastructure” is the number one issue facing the water and sewer industry. Infrastructure around the County is aging and in need of replacement; the American Society of Civil Engineers recently graded our County’s water and sewer infrastructure a “D” on the academic A to F scale.
When asked, General Manager Orsini stated, “I would give MCSD’s infrastructure grade a “B”. We have made the decision to be proactive and address our infrastructure needs, and our ratepayers have been supportive in our efforts”. Since 2006, MCSD has been considering options for needed facilities to ensure its ability to provide wastewater treatment services to current and future District customers. The issuance of an updated NPDES discharge permit in 2008, which would place more stringent requirements on the District related to its discharge of wastewater, accelerated planning and discussion toward a long-term solution.

In addition to the March 24, 2015 public scoping meeting, there will be additional opportunities for public input at the April 1, 2015 Regular Board Meeting at Azalea Hall beginning at 7:00pm. At this meeting the initiation of Proposition 218 will take place as the rate payers of McKinleyville will be asked to vote on the new rate structure.

From the LA Times:

"Tucked deep inside the 1,603-page federal spending measure is a provision that effectively ends the federal government's prohibition on medical marijuana and signals a major shift in drug policy."
More
Posted by Tom Sebourn at 10:38 PM 3 comments: 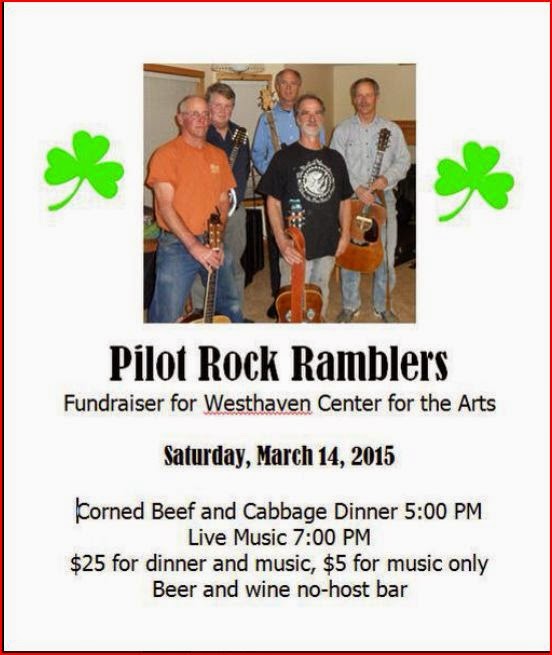 Unhappy Anniversary Fukushima, It's Been 4 Years Of Radiation!

I find it a bit ironic that today we are setting up the call center and getting ready for yet another Radiothon to raise money for St. Jude Children's Research Hospital in Memphis Tennessee.

If you want to help find cures for cancer, St. Jude is a good place to start. The radiothon will take place Thursday and Friday, March 12th. and 13th. Three of our music stations will suspend their regular programming to pull the heart strings of our listeners from 6 am to 7 pm both days. Last year we raised over $123-Thousand Dollars for St. Jude and hope to do the same or better this year. To donate, call 1-800-942-8771 during the radiothon hours listed above. It is my belief that researchers at St. Jude Children's Research Hospital are closer to a cure for cancer than scientists are to a cure for Fukushima.

And so feel that it is a bit ironic because today, the day before the radiothon starts, is the 4 year anniversary of the 3 Fukushima Diiachi Power Plants melted down with at least one reactor that contained MOX fuel which exploded and spread hot particles all the way around the northern hemsphere. Hundreds of millions of people were suddenly overly exposed to cancer due to a large earthquake, tsunami and poor power plant design.

The Nuclear industry isn't phased by this disaster that is still continuing to spew radioactive water and air into our biosphere with no end in sight. In fact, they have redoubled their efforts and are spending millions of dollars lobbying governments all over the world to build more nuclear reactors.

I say that if and when, scientists and industry officials finally make Fukushima and Chernobyl safe for people to live around and stop the radiation from destroying the planet, then and only then should we even consider a future with limited nuclear power generation. The idea of actually building and licensing more of these plants that are so expensive and dangerous that no insurance company in the world will write a policy for one, is insane and suicidal in my opinion.

From the recent story that PG &E lied about the licensing of it's Diablo Canyon nuclear power plant when considering earthquake standards to the ongoing disaster in New Mexico where an underground nuclear disposal site caught fire and has been leaking radiation, it is clear that Fukushima is not a stand alone disaster. The entire industry is currently a disaster and needs to be re-evaluated from the ground up before we re-license or build another facility anywhere on the planet.

Shelter Cove resident Peter Galvin and 9 other non polar bear activists have been found not guilty for taking part in a protest the day after the People's Climate March last year.

Over 100 people were arrested in the climate change protest called "The Flood of Wall St." and according to Cole Mellino at EcoWatch, 10 of those arrested decided to fight the charges including the Director of the Center For Biological Diversity Peter Galvin.

" According to Flood Wall Street, Judge Mandelbaum ruled that the New York Police Department’s (NYPD) order to disperse violated the First Amendment. In his ruling, the judge also found “that by ordering protesters to leave the entire Wall Street area, police violated protesters’
First Amendment right to carry their message directly to its intended recipients: the Wall Street bankers who bankroll climate change.”

Below is a copy of a post from last year about a low power Jazz radio station in Eureka built by Eureka resident Robert Stretton. The station has moved from it's former location near 10th and M Streets to near the Bayshore Mall. If you are at the mall or waiting for someone while in the car, check out FM 96.9.

I have found that in my car the station goes from around the Victoria Place Shopping Center on the north end to about the Elk River on the south end along US 101. It is also available on online.

Computer Talk Is Back On Humboldt's New Jazz Station

A new local online radio station is up and going 24/7 called Local FM.Net. It has a tiny FM signal at 96.9 FM in Eureka and if you can pick it up, you are pretty close to Robert's house near 10th and M Streets. The 30 milliWatt transmitter goes about 200 feet but in an emergency it can go up to 7 watts which would cover way more, perhaps a couple of miles or more.

There is a feature at the web site called the News Weather & Neighborhood Bulletin Board show. It is available on demand and is produced at 11am and 7 pm. There is also NPR News.

Built on 8 free software packages and a donated XP computer Robert says he has all of about $400.00 worth of equipment so far but he will be adding things like it's own back up power.

As it stands it has the Emergency Alert System for weather as it is hooked up to a Midland WR300 Weather Radio which has EAS Activation, and something missing around here. Great Jazz!

There is also a great weekend show that used to be on KGOE in Eureka. Dave Mason and his brother Evil Steve of Computer Talk take your calls and talk computers. That airs live on Saturday's from 10 AM to Noon.
Posted by Tom Sebourn at 11:11 AM No comments: