The New Yorker - On Animal Deaths And Human Anxieties

With my photo of a lone starfish on Little Trinidad Head here in Humboldt County last week, I have been wondering like many of you, just what this all means? We have ocean warming, a sardine die off and acidification of ocean waters which dissolves sea shells. Then there are the dead sea lions in California and the thirteen hundred dead waterfowl here in Humboldt County, taken with the starfish wasting disease and you can see why some folks are becoming a bit alarmed. 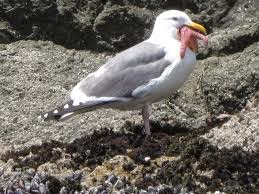 I put a call into the HSU Marine Lab but have not had my call returned yet. I wanted to get their most recent take about all of this. Perhaps they could shed some more light on the situation?

Then I saw this story in The New Yorker. While it doesn't exactly explain why we are witnessing some of the largest animal die offs in the history of the world, it does put everything into a better perspective of understanding. There are just so many factors that come into play but the underlying theme is that the planet is not healthy. One point brought up about the starfish demise is that it started before radiation from Fukushima actually reached the west coast.


Here are just two paragraphs from the New Yorker story which came out yesterday:


Oddly, what Raimondi called the “worst-case scenario” for the sea-star die-off is the opposite of what happened in the Caribbean. On the Pacific coast, the big, habitat-forming structures are not coral reefs but underwater “forests” of seaweed. Starfish eat sea urchins; without them, urchins may mow down the kelp forests. That in turn can call up a roster of changes that range from more frequent eagle attacks on seabirds to higher waves striking the shore: not the end of the world, but a different world—and, ecologically speaking, a poorer one.

It might not happen that way, of course. Nature is full of surprises. Observers on the West Coast this spring are reporting more baby starfish, many no bigger than a fingernail, at more sites than at any time in the past fifteen years. The best current explanation for this supernova of cuteness is that the onset of wasting disease triggered starfish to reproduce intensively before dying. “If they survive, it means recovery may be underway,” Raimondi said of the tiny sea stars. “If they grow up and start wasting away, well, that’s a different story.” These days, this may qualify as hope.

Read the entire story HERE.
Posted by Tom Sebourn at 9:55 AM