We've Seen This Before But Art Bell May Be Making A Comeback!

Night Owls and Coast to Coasties, the voice that kept me from getting any sleep for over a decade may be returning to the airwaves. Or not. It seems that KGOE and other stations may be getting the bypass directly to the internet. . There is a business plan though and everything. Would you subscribe and pay 5 dollars a month for access to the show?

Here is what is posted today at ArtBell.com 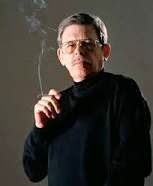 The Final Results, Art Bell IS Coming Back!

After extensive analysis and elongated negotiations with several suiters, we have decided that we can go ahead on the planned launch of “Midnight in the Desert” in late July, using a business model that will allow us to manage the entire operation on our own.

As was hinted by Art via his Facebook feed, we thought about it, compared the numbers and decided we could pay for bandwidth, pay the commercial licensing fees, pay our own overhead and still be financially viable, assuming the following conditions:

1. We have a considerable number of fans subscribe to a membership service that allows you to access the archived shows anytime via the website for a reasonable $5 / month.

2. We can sell advertising to be played during the breaks during the show. Not a lot, but enough to help pay for the music licensing during the LIVE FREE stream.

3. We can successfully curb pirated posts of our content to the Internet.

We’ll be operating under a certain specific licensing model that will allow us to ramp up from a “small webcaster” status into a large broadcaster in the future. It is imperitive that we earn enough through subscribers and ads sales to pay the bandwidth costs and music licensing fees. We believe that we can ramp up successfully using the current models in place at this time.

However, this happens to be the year (2015) that music industry participants are negotiating the next 5 years (2016-2020) rates for music licensing on the Internet. It is a wide open arena, and some license models may not survive. But we believe that we can operate under the current 2015 model for 6 months, and eventually fit into a 2016 model that is still cost effective.

We hope to recoup  all of our investments within the first 6 months, so we can better endure the cost increases that will inevitably happen in 2016. If the fans support us with memberships and the advertisers are satisfied, we should be good for a long while.
Keep watching here for the launch date announcement and further updates as we can pass along. We’ll let you know when it’s time to promote the show.
— Keith and Art