The Ocean Radiation Is Here. Assuming We Ever Find A Way To Stop Fukushima, What's Next?

Be sure to watch the video at the very bottom of this post. Between here and there are some depressing observations about the situation the planet is in due to the nuclear industry and more specifically Fukushima. First is a well done story from Statesman Journal that lays out where we are and that the governments of the world aren't actually doing much to help or test for radiation. 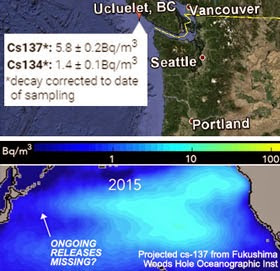 Here is the information up to this point from the StatesmanJournal dot com. In November, Buesseler reported that Fukushima radiation had been identified in 10 offshore samples, including one 100 miles off the coast of Eureka, California.
Here is a story link from enews about the dead animals from the pacific being tested at US universities. If you want the more scientific stuff see this.

Here is a link to video of the event.

Then there is the explosion in New York  at the Indian Point Nuclear Power Plant this weekend that should put people on notice that this type of power generation is always subject to scary scenarios due to that fact that it is not always controllable.

On the bright side, if we ever figure out how to stop Fukushima, New Mexico, Chernybol and all of the other reactors and waste dumps from destroying all life on earth there is this. Elon Musk, CEO at Tesla which makes electric automobiles and sports cars has a new invention that allows wind and solar to make nuclear power obsolete.
Read about his new battery here and here.

Or see another video, this one from Elon Musk launching the product that has now made nuclear power obsolete. Stored sunlight. . It's a beautiful thing. This would seem to be the answer to many of our power problems because it is the power bank that has never existed before.  One that gives us the possibility to transform the planet for the better.

I hope we embrace this technology and from what I can see, that is exactly what is happening. It is being accepted and funded. This changes the whole equation for us currently and those that follow us on planet earth. It is possible for them to say to the nuclear industry, "we don't need your dangerous technology anymore, we have wind, solar and wave generation. When that isn't sufficient, we have gas, oil, hydro-electric and coal. You have become too dangerous and therefore, obsolete.

We however must not stand by and wish for the best, we must demand that the powers that be are held accountable to the rest of us for destroying an entire ocean and who knows how many countless lives of humans and other creatures in the ecosystem that we depend on for our own lives.

For the first time in a long time, the banksters may see things our way and get behind this future that could exist. This is a remarkable achievement considering the future that they have currently been funding.