Today was the annual Fathers Day Trinidad Fish Festival. Traditionally celebrated on Trinity Sunday, it was originally booked as an all you can eat Crab Fest. I got dad a beer and we contemplated the different lines. 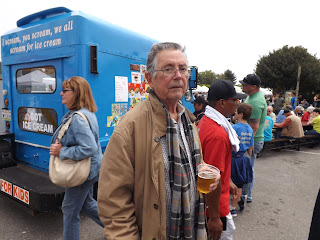 This year, due to larger and larger crowds and the inability to serve everyone that shows up, they have opted for some outside vendors. The La Barca taco truck was there with ceviche tostadas, fish tacos and super burritos. Larrupuin Cafe was bbq-ing those delicious little Kumamoto oysters. Sunset Restaurant grilled oysters on the half shell and the Sweet Treats ice cream truck was there. Also present with food treats were the folks at Lighthouse Grill with clam chowder and a salmon tostada. 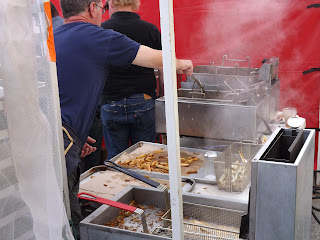 The Trinidad Chamber of Commerce still did bbq salmon dinners but instead of the white fish combo or fried fish plate options, they had two lines one for the salmon and the other for fish n chips. That line was pretty long and slow but the food looked great. I had the salmon so I wouldn't have to wait.

Live music at the Town Hall Stage included, Jim Lahman Band from 11 am to 1 pm. Blue Rhythm Revue from 1:30 to 3:30 pm and Trinidad Groove Collective closed out the afternoon from 3:30 to 5 pm. 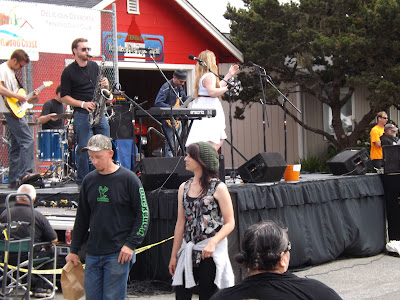 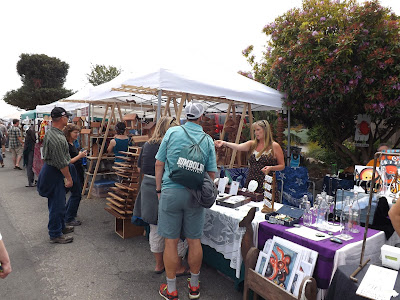 I ran into an old facebook friend that I have known for years but just met today. Mary has a booth where she makes useful and beautiful things out of old, recycled sweaters. She calls her collection  "Merry-Go-Round Creations". It was great to finally meet her in person. 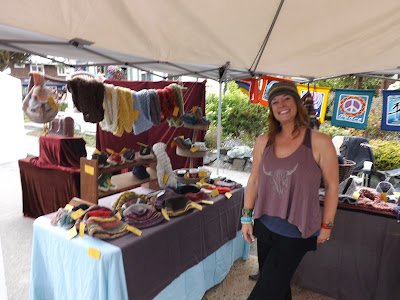 I got some local art greeting cards and a can of this local Albacore Tuna from Macley Family Fishing Co. 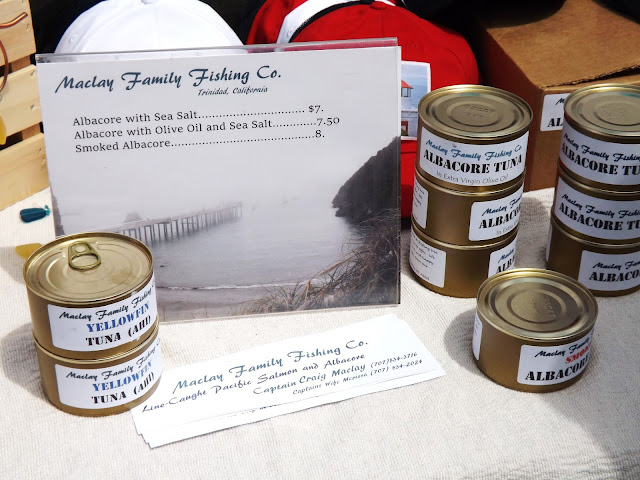 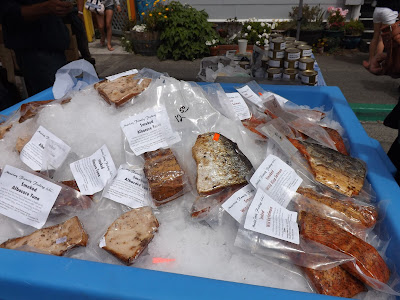 They also had packaged smoked fish on ice.
There were two shuttles from Cher-Ae-Heights Casino that moved people from the casino parking lot, to the downtown venue. That helped the flow of people and traffic so that it didn't appear to back up onto the freeway as in previous years.
Posted by Tom Sebourn at 4:47 PM 3 comments:

Eureka Summer Concert Series Is Back This Thursday Night

Every Summer for well over a decade the City of Eureka and Bicoastal Media have hosted the Eureka Summer Concert Series in Old Town Eureka. The 10 concerts are on Thursday nights from June 18th to August 20th. Concerts start at 6 pm and go till about 8 pm and are free to the general public. 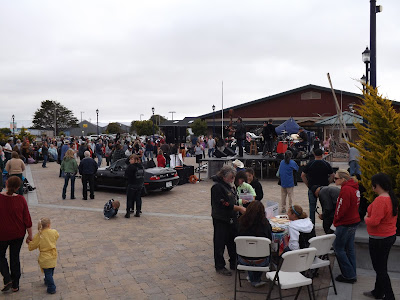 Location is the Eureka Water Front at the foot of C Street about 2 blocks west of US 101 in Old Town Eureka. 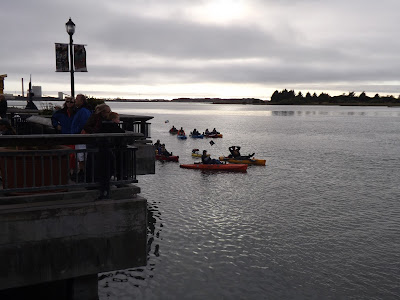 Bring folding chairs, blankets (it gets cold on the water front), jackets, snacks etc. Dancing in encouraged. Some enjoy the concert from the bay in canoes and kayaks. Either way, it's a summer tradition here in Eureka and it's all paid for by local advertisers. 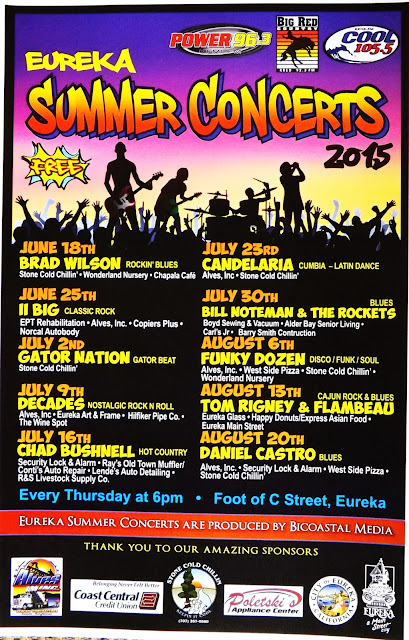 According to Ryan Burns writing then for the North Coast Journal, the name of the airport was changed in 2013 by the Humboldt County Board of Supervisors to "The California Redwood Coast - Humboldt County Airport". No one really calls it that though.

Evidently this Goodyear Blimp,  a GZ-20A Spirit of America, is making its final voyage which includes a stop here on the north coast for today and tomorrow before it heads up to Medford Oregon and other various stops, mostly along the west coast. 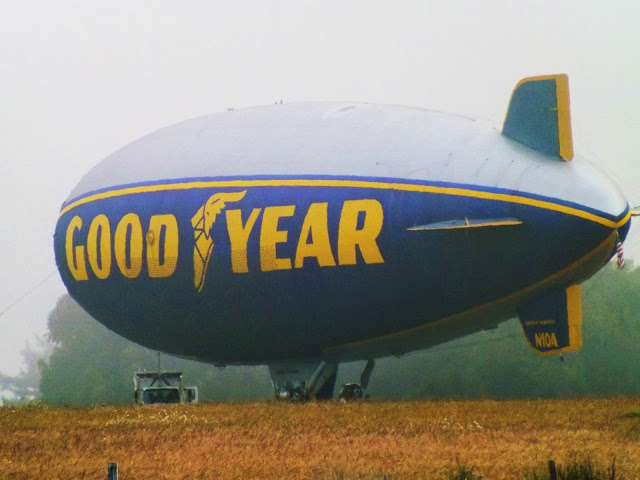 I was driving home and could see this thing parked in the fog from the freeway. The best viewing is the terminal or the Central Avenue on the back side of the airport.

The Lost Coast Outpost has some more on this visit.

Posted by Tom Sebourn at 7:25 PM No comments:

The boat dock at Big Lagoon County Park has been removed.
Below is a photo of the old dock from earlier in the year. 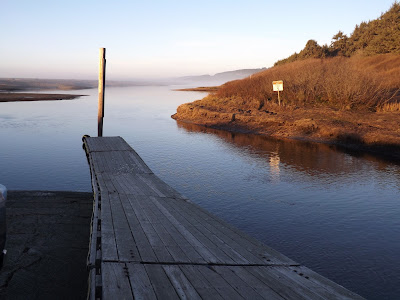 Today the dock was gone. I was wondering if it had anything to do with the tragic drowning of little Fisher Midnight Richardson at the lagoon last December. I believe his body was found by the dock. 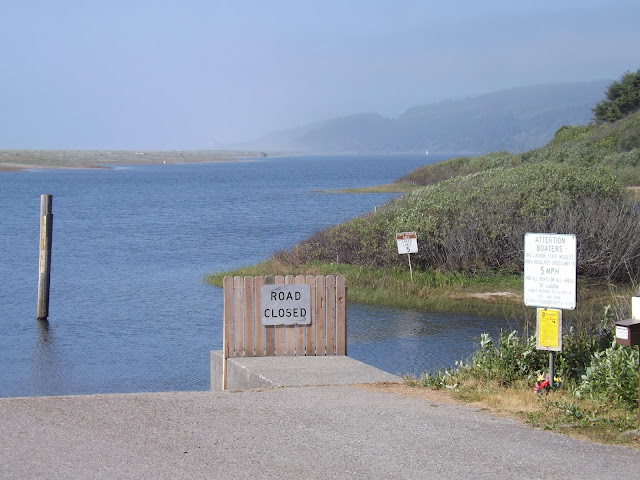 Today there were flowers next to a sign by the dock and a sign with a small fence that says road closed where the dock used to begin. 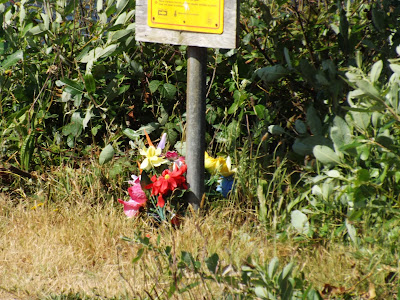 I did a little digging. Turns out the dock had been removed as part of a park enhancement project that was put into motion over 5 years ago. Along with the replacing of the old dock there will finally be a boat washing station (at least a hose and place to use it). That second item, the washing station is seriously needed since

Big Lagoon has been invaded by a foreign species that hitches rides on unwashed boats. The New Zealand Mud Snail can attach to your boat, canoe or kayak and without a good washing after pulling the boat out of the water, can live for a long time on your craft only to be introduced into other areas like Stone Lagoon to the north. Some believe though that Stone Lagoon also harbors the creatures. 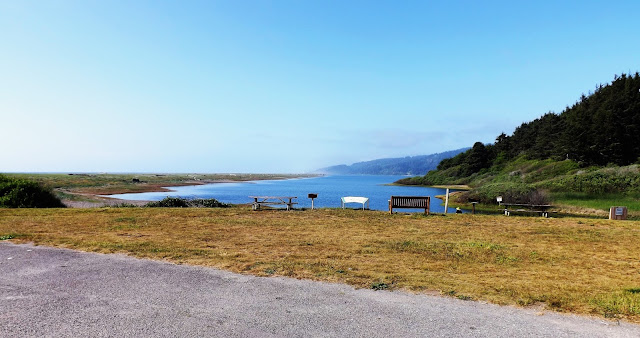 It's a beautiful lagoon and there is a camp ground just a few hundred feet from the boat launch. Day fees are 2 dollars per carload or 1 dollar for veterans.

Here is the entire schedule


SCHEDULE for June 5th
There is now a Shuttle Service Provided by Cher-ae Heights Casino
Skate Artists: We know you had trouble finding the ramps last month, they are now at the original spot, Saunder’s Park Parking Lot! BYOB (bring your own board)
Upper Trinidad
SAUNDER'S PARK (start of Patricks Point Drive) 8:45. "A Fire Fusion Extravaganza!" Dance by Circus of the Elements & Tribal Oasis. Music by sambAmore. Skate Ramps provided by Trinidad Skatepark Alliance.