Kansas Voting Machines Could Be Rigging Elections, But Officials Don't Want To Know

If voting machines are accurate, it should be easy to tell. At least that's what a Kansas mathematician with a doctorate in statistics says. Beth Clarkson is trying to find out why she is seeing consistent patterns from voting results which she says don't make sense. 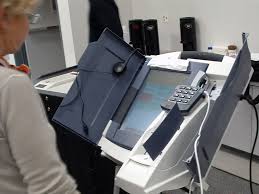 We have heard about this from Bradblog's Brad Friedman for years now but others are starting to take notice of these proprietary machines that are not standardized and which count our votes in secret. Those who would poo poo this being a problem have either not actually looked into it or are purposely trying to mislead people about the machines. Clarkson has had to sue her state to get records and still is hitting a wall and lots of push back from state officials.

Here is an excerpt from the article that I found at OccupyDemocrats.com

Clarkson is baffled by the reluctant attitude she has faced in trying to do the right thing and make sure that votes were being counted accurately. She said: “I really did not expect to have a lot of problems getting these (records).”

At this point, you have to wonder…what are they hiding? Given how Republicans across the country are busy passing “voter registration laws” to combat all the “fraud” that has been shown not to exist, it would follow that it’s a classic smoke-and-mirrors tactic to divert attention away from the fraud that they’ve been perpetrating the whole time- whether through gerrymandering or questionable voting machines.

Read the whole thing.
Posted by Tom Sebourn at 2:59 PM