I have asked the same question by looking at the minimum wage during the 1970's and the cost of a Big Mac at the time. I came to the conclusion that you could purchase more big macs in the 1970 after working one hour at minimum wage than today.

Now Thinkprogress.org has come up with some math to back up what doubling the minimum wage would to the labor cost of a big mac. It would raise the cost from $3.99 to $4.16 or in other words it would go up .17 cents. 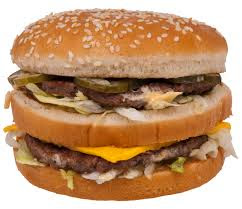 For those of you that don't understand the difference between cost and labor cost, you should read up on this. If you think doubling the minimum wage will double the cost of goods consider this.
Excerpt from Thinkprogress

If the minimum wage were increased to $15 an hour, prices at fast food restaurants would rise by an estimated 4.3 percent, according to a new study. That would mean a McDonald’s Big Mac, which currently goes for $3.99, would cost about 17 cents more, or $4.16.
The study from Purdue University’s School of Hospitality and Tourism Management also found that in order to compensate for the higher cost of employee compensation at limited-service restaurants, or those without table service or tipping, if they decided to change food sizes rather than prices, the Big Mac would shrink somewhere between 12 and 70 percent.
The price increases would be a good deal larger if the minimum wage were raised to $22 an hour, or average private sector pay: the authors found they would increase by 25 percent, raising the price of a Big Mac by about a dollar.