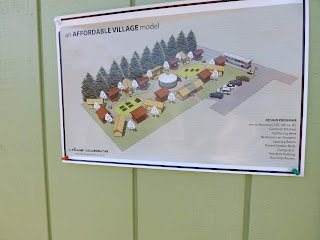 The expo had two panel discussions, 1) on issues of the establishment of immediate places to live for the over 2,000 unhoused neighbors in Humboldt County and
2) a panel of local clergy on the Religious Imperative in a Shelter Crisis.
The Expo helped  raise funds for AHHA’s efforts to create immediate solutions for ‘safe, warm, and dry
first’.

There were displays of tiny homes 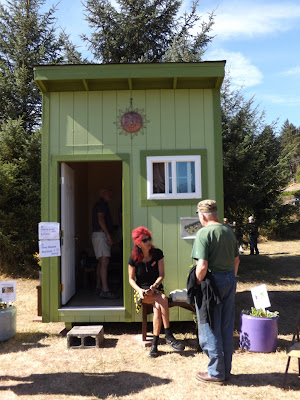 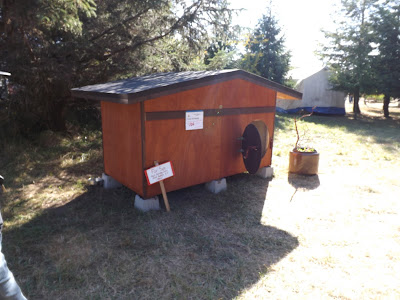 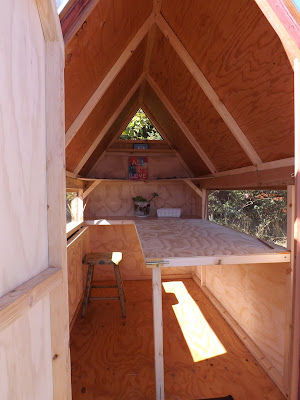 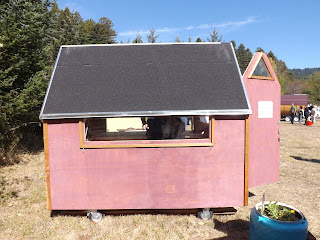 This tiny home with a pop out was built by carpenter Chris G. Housley. He said it cost him about $400.00 to build donating his time but feels it would cost about $1,200 to build if it were done in a factory. He envisions them being built in an IKEA type factory with mostly robots to get the price down. He says he builds and donates  these to the homeless where he lives outside of Petaluma Ca. 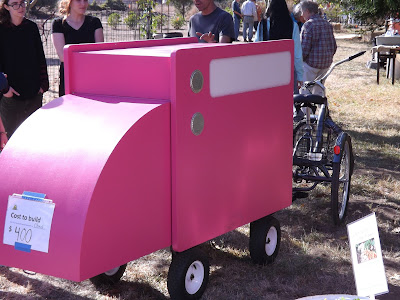 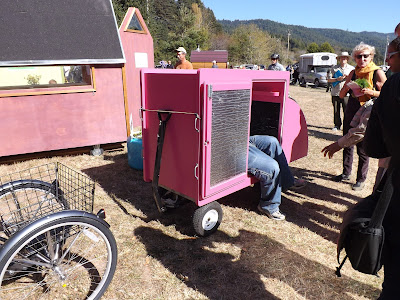 There was even a mobile sauna with shower at the event. 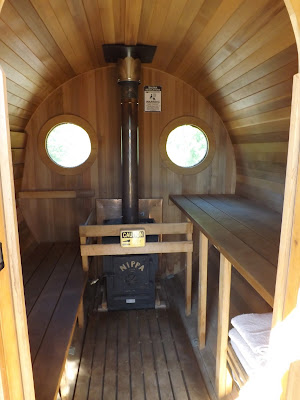 There was also food and entertainment on two stages. 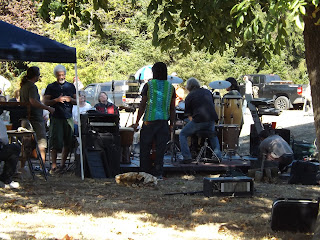 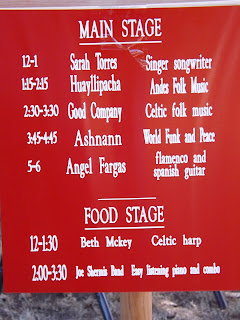 The idea of tiny home villages all over the country is what is being explored here.

Here's my take:
It started over 30 years ago, our elected representatives decided to rig the system against the middle class and the working poor so that all financial gains would go to the upper 1 percent or those that paid for our representatives elections. This is called fascism. Over the past 3 decades or more this trend has continued to the point that what was left of the US middle class is now on life support with little hope that things would ever return to the good old days where income inequality was not such a big deal. These days in the richest country on the planet, there are mostly two groups, the haves or the 1% and the have not's or the 99%.

Back before most of our good paying jobs were sent over seas to slave labor, our middle class was the envy of the planet. Any person willing to work hard enough, if their health held out, could easily make enough money to support not only themselves, but a family. If you go back 40 or 50 years, only one parent needed to work to do this. When I was young in the 1960's and 1970's many  families had two working parents but many times the wife would only work part time, just to make extra money for hospital bills, vacations or that second car.

College was cheap, if you wanted to make good money, just go to college. It didn't cost 40 or 70 thousand dollars to get a bachelors degree at a good college. But even if you didn't go to college, there was always manual or skilled labor in factories, construction and the trades.

Now, kids graduate from college with debt so high, the only way to pay back their loans is to move back into mom and dad's place or live on the streets. Sure, some find great jobs but that number is much, much smaller that it used to be.

So here we are, a generation of college educated professionals, moving back into their parents homes with no place to use their degree. And then there are the less fortunate ones that for what ever reason, didn't get a degree or are not in good physical or mental health. These people have been falling through the cracks for the past 30 to 40 years and now there are so many of them, they are not invisible anymore. They are living 5 to an apartment, or on the streets in their cars if they are lucky enough to still have a car. They are constantly harassed and forced to "move on" by law enforcement.

City codes have not kept up with the current situation. Most people these days cannot afford to buy or rent a normal size house or apartment by themselves. Sure there are a few states where rent is relatively cheap because for the most part, no one wants to live there but in the majority of the states with larger populations,
for many, rent is  unobtainable. The richest country in the world has not taken it's head out of the sand and looked around at it's inhabitants. It's as if our elected officials have blinders on. Those working 2 or 3 jobs just trying to keep their somewhat middle class lifestyle are too busy to get involved enough to help themselves. They don't have time to go to city council meetings or read up on what their elected officials are doing to them in Washington. So it's up to the rest of us. The rich and the poor.

It's time we open our eyes and accept what we see. We are no longer a country with a huge middle class. We are no longer that great shining city on the hill that we used to be. We have allowed this to happen. It wasn't by accident though. This is by design! The corporations that own our politicians have, for some reason wanted this to happen. Now that it has happened we need to change our city, county and state codes and laws to allow for what we have created. We need to stop forcing builders to build 12-hundred square foot housed that no one can afford and allow more homeless campgrounds, tiny house villages and smaller apartments. The UN is already moving in this direction. Some municipalities are also stepping up to the plate and allowing for more creative solutions. This is reality and we need to accept it.

Being homeless is a crime but it shouldn't be. Why should the person without anything be a criminal when those that took it from them are free to keep taking and fleecing the earth and the people on it? That is where the crime is being committed and as Utah Phillips said, "The Earth is being killed, and the people killing it have names and addresses". With the advent of the internet, we are starting to learn where and who these people are and they are getting nervous.

So back to this one solution to a major problem, housing. There are more single people living in this country than ever before. This is due to many factors but income inequality is one of them. If I can't afford to support myself, how can I start family? This leaves a lot of people either living with people in unhealthy relationships just to get by, back at their parents house or on the streets. One solution is a resident and non-profit co-managed micro housing village. Structures from 100 sq. feet and more all in one area with a single community kitchen,  separate rest rooms and shower building, gardens and micro businesses. With the opportunity to produce for each other food, clothing, more housing, preventative health care, reuse and repair facilities, alternative energy and transportation innovations.

AHHA advocates for different campground models too. Ones where people could sleep in cars, tents, RV's, open tent camping, bike camping, (bike and ride), park and sleep.  Assisting participant and non profit co-managed camp sanctuaries should be throughout the county and near services for people to get what they need.

They advocate for Church camping in tents, cars and RV's and what I was talking about, zoning changes to allow residential camping and micro housing on residential properties and or city and county properties.

AHHA also wants rest areas for people to come to for safe, legal sleep which should be open 24/7. Warming stations can be built and the rest areas can be in under used county and city parks, schools, vacant buildings and private property.

The tiny houses seen in the photos above do not need plumbing or electricity. They are just a safe place to sleep and keep ones meager belongings. They are insulated and can have amenities such as solar panels and batteries for lights or charging phones or tablets. Some can even have a small storage locker at the rear for storing things that one shouldn't sleep. Central facilities make everything much cheaper than each individual having to pay for electric, plumbing, and the fact that there isn't any heat isn't that big of a deal to people otherwise stuck on the street. A good sleeping bag and a dog can keep one warm in a small insulated tiny house.

AHHA says their mission is to provide information, education, advocacy and policy development on a variety of affordable housing solutions for the homeless in Humboldt County (but this model should be replicated nation wide). We will facilitate the implementation of these alternative models and assist in post completion operations by networking with private groups, non-profits, public agencies, religious organizations and individuals.