First of all, I just wanted to give visitors and travelers a heads up that it's becoming almost impossible to get propane at the Chevron station in Trinidad these days. For 3 weekends in a row, I have had to drive to Arcata because the guy either didn't show up, won't be in for a few hours or is off that day. Both Saturday and Sunday. I would also like to add that if you do drive to the Chevron on Guintoli Rd. in Arcata, you will not only be able to purchase propane on the weekend, but you will save .50 cents a gallon too. So if you are buying enough, it actually pays to make the drive. If you are in a pinch, they do have the exchange rack where you can pay around 15 dollars more for a tank of propane. There are two exchange racks, one at the Chevron and one at Murphy's Market across the street. The service takes your empty tank and exchanges it for a full one. I only recommend this service for those that have an old tank that is starting to rust. You can exchange that for a shiny newer one that is full. 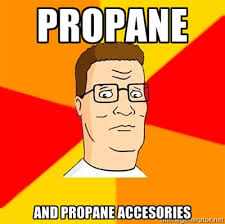 Now about that storm. Most north west  storms have been breaking up when they hit the "warm blob" of water off the Oregon coast. This has been going on for over seventeen hundred days or since the 3 poorly designed nuclear reactors in  Fukushima Japan exploded and melted down. This is a good thing since rain from the north west would only make the radioactive particles in the air that we on the west coast are exposed to these days, end up on our streams, lakes, gardens,  rain barrels and all over ourselves if we happen to get caught in it.

However this whole lack of weather or drought scenario is bad for the up welling of the ocean which brings nutrients up to the plankton so the small fish have something to eat. Without those strong winter storms from the north west there isn't much wind. The wind blowing over the ocean creates the up welling. Since that hasn't happened for over seventeen hundred days, the small fish have all but disappeared. This creates a huge problem for bigger fish and birds since small fish is what they used to eat.

But I digress. Back to that storm. They are predicting gusty and erratic winds up to 40 mile per hour  with rain tonight.Tomorrow will be unstable and cold with a chance of hail or a thunderstorm.
Here is a statement from the National Weather Service for my area.

Posted by Tom Sebourn at 4:00 PM No comments:

Voter Fraud Is Rare But This Is What Election Fraud Looks Like!

Brad Freidman is my go to expert on voting, voting machines and irregularities.
In his latest story he is showing the world and the GOP what election fraud actually looks like. Indictments have been handed down in Kentucky. That's right, the same state that just had a very strange and unlikely election for its new governor Matt Bevin.

This latest election isn't yet being contested yet but the past 3 are. Sadly to say this is how our voting system can be rigged.

From The Brad Blog


Well, now we've got a whole passel of still more crooked officials to add to the list. Moreover: The Kentucky officials arrested and indicted today, "including the circuit court judge, the county clerk, and election officers" of Clay County, have been charged with "chang[ing] votes at the voting machine" and showing others how to do it!
Hello?!...
From Lexington, Kentucky's NBC affiliate this afternoon:
Five Clay County officials, including the circuit court judge, the county clerk, and election officers were arrested Thursday after they were indicted on federal charges accusing them of using corrupt tactics to obtain political power and personal gain.
The 10-count indictment, unsealed Thursday, accused the defendants of a conspiracy from March 2002 until November 2006 that violated the Racketeering Influenced and Corrupt Organizations Act (RICO). RICO is a federal statute that prosecutors use to combat organized crime. The defendants were also indicted for extortion, mail fraud, obstruction of justice, conspiracy to injure voters' rights and conspiracy to commit voter fraud.
According to the indictment, these alleged criminal actions affected the outcome of federal, local, and state primary and general elections in 2002, 2004, and 2006.

So you just have to read more here at the Brad Blog.com
In the mean time remember that it's a lot easier to steal thousands of votes with the push of a button than having dead people show up. This goes even deeper.

Oh please go to the link here because brad might not want me posting anymore of this with out me going there. OK just one more excerpt.


[Ed Note: According to the indictment, there were actually six, as opposed to "five", county officials arrested, counter to the NBC affiliate's original report above. See the "Clarification" at bottom of this story for more details.]
The article goes on to list some of the criminal actions listed in the indictment. Among them [emphasis added]:
Posted by Tom Sebourn at 10:41 PM No comments:

Popcorn Clouds Creating Rain And Hail For The North Coast

Thunder storms are possible overnight as a front moves though the north coast of California into Monday morning.
They are bringing showers with possible thundershowers, which are much needed. 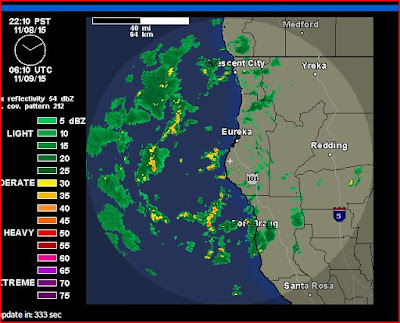